What to buy in a downturn

Don't shy away from equities because of the slowdown. Here are four investment ideas that could yield rich rewards if you stay put for the long term.

Rule number one: capital should be protected. Rule number two: don't forget rule number one." That's Manish Sonthalia, portfolio manager at Motilal Oswal Financial Services, replying to a question on the strategies that investors should follow in these troubled times. Yes, it might seem like a conservative opinion, but most analysts we spoke to believe that this is the best strategy for small investors. "At present, safety is more important than capital appreciation," says Ajay Parmar, head of research, Emkay Global Financial Services. Most fund managers are taking their own advice; despite multi-year low valuations, most of them are either sitting on large piles of cash or are confining themselves to big defensive stocks.

But honestly, it doesn't have to stay this way. History shows that downturns have generally paved the way for bigger and better bull runs. In fact, markets have consistently rewarded the people who have held their investments for the long term. For instance, in the past 10 years, the Sensex, on an average, has earned annual returns of 17.5%, way ahead of any fixed income option. So even as you shy away from risk, it's a good idea to take some exposure to the equity market. We take a look at some of the possible avenues. Click here to Enlarge
Historically, FMCG (fast-moving consumer goods) and healthcare stocks have fared well in bear markets due to the relatively inelastic demand for their goods and services. One year into the current bear market and there is an increasing demand for these stocks as analysts consider them to be the least affected by the slowing economy.

Analysts expect these stocks to continue to attract investors, which could result in the expansion of their PE ratios. Analysts at Enam Securities say that foreign or domestic funds, which are sitting on cash, would prefer large-cap defensive stocks such as HUL, Nestle, Colgate, Tata Power and Bhel.

If you can spot a good company, the mid- and small-cap space holds promise. You can get them at throwaway prices as these stocks have been hammered amid concerns about funding, high interest rates and fast evaporating demand. "Midcap and small-cap companies generate multi-fold returns compared with the large-cap companies in an up-cycle," says Prasanna Pathak, fund manager, equity, Taurus Mutual Fund. Remember, however, that you can end up losing around 20-25%. "Badly managed mid-caps tend to destroy investor wealth quickly. The need of the hour is to identify mid-cap stocks with good managements and strong business models," says Pathak. 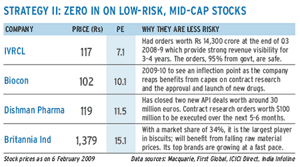 So, which companies should you be looking at? Those like Britannia and IVRCL are holding up well in terms of robust sales and firm order booking. With a 34% market share in the fast growing biscuits business, Britannia is still registering healthy sales and profit growth rates. The company registered a 25% revenue growth in the recently ended third quarter. Meanwhile, IVRCL, with an order book of Rs 14,300 crore, has a revenue visibility for the next three to four years. The order inflows in the last quarter reached Rs 2,000 crore, making it one of the safer bets in the infrastructure space.

"There is a case to look beyond defensives, considering the sharp correction that has already taken place in the market," says Mahesh Patil, co-head, equity investments, Birla Sun Life Mutual Fund. Enter PSU stocks. These are the oldies, but goodies, of any 'safe' portfolio and are becoming more popular now due to their conservative management approach and benign financials. Public sector banks like SBI, PNB and Bank of India are already the most preferred stocks due to their superior growth rates, low-cost deposits and cheap valuations (PE less than 10).

During the past bear phases, PSU stocks have outperformed the broader markets and there are expectations that the same might happen in the current scenario. The Sensex lost 32% in the last bear market between March 2000 and December 2002, while the BSE PSU index generated a positive return of 41% in the same period. According to Parmar, the PSU Index has outperformed the Sensex in six out of eight years during 2000-8.

These stocks are really for the gamblers. You could end up making a killing, but can your portfolio (and your heart) stand the strain? We are talking of investment in companies that are suffering deteriorating businesses and huge debt burdens, but have the potential to be multibaggers when the environment turns favourable.

The companies like DLF and Sesa Goa, leaders in their respective businesses, are fighting the sharp fall in commodity prices and housing demand. While odds are against these companies, any revival in consumer demand or improvement in risk aversion can help them make a strong comeback. The good news is that these stocks are going at firesale prices. Sesa Goa (Rs 98) is available at three times the annualised 2008-9 earnings per share. While the steep fall in PE multiple is justified considering the sharp correction in iron ore prices, it can also be a rewarding bet if the demand for ore picks up in China. The other possibility is DLF, which is struggling to maintain real estate sales in a slowing economy. The stock, rated 'sell' by most brokerages, might attract some investor interest once the promoter company DLF Assets, which owes Rs 5,459 crore to DLF, clears its debt or raises new funds.

Reliance Power and RNRL are other high-risk stocks that could generate superior returns. The former is grabbing ultra mega power projects, while the latter is in the midst of a court battle for the supply of cheaper gas. While these companies do not earn any substantial revenues as of now, completion of projects ahead of schedule and a favourable court verdict can prove highly rewarding.

The last of stock taking

Stocks at a good bargain