Most of the districts bordering Andhra Pradesh, Chhattisgarh and Jharkhand have been put on high alert and the Odisha government is working with the neighbouring states to constantly monitor the movement of locust swarms 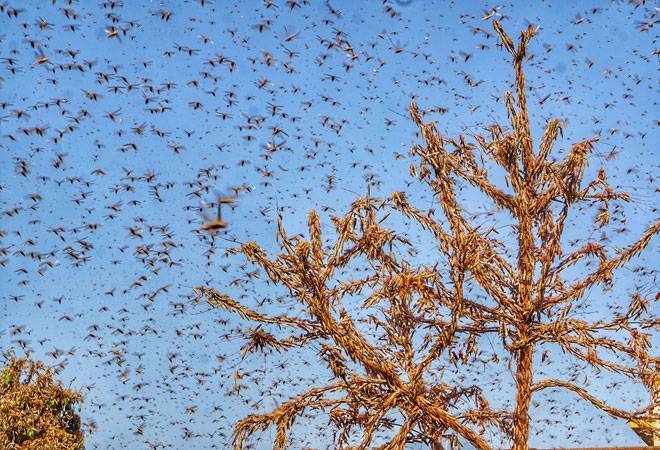 The Odisha government has identified nine districts vulnerable to possible locust invasion, and has put the farmers and the agriculture department on high alert, officials said on Tuesday.

Most of the districts bordering Andhra Pradesh, Chhattisgarh and Jharkhand have been put on high alert and the Odisha government is working with the neighbouring states to constantly monitor the movement of locust swarms, agriculture and farmer empowerment special secretary S K Vashist said.

In a meeting held at the Chief Minister's Office, it was decided to use fire tenders for spraying insecticide.

It was also been decided to keep a constant vigil for at least the next 10 days, an official said.

Nabarangpur, Nuapada, Kalahandi, Malkangiri, Koraput, Rayagada, Jharsuguda, Sundergarh and Bargarh districts have been identified as the vulnerable places where locusts could cause damage, particularly the paddy cultivation.

They may also cause damage to vegetable plantations and trees, the official said.

Though the swarm of locust entered neighbouring Chhattishgarh on Monday, they have returned to Madhya Pradesh. Still, the state government did not rule out the possibility of their invasion to Odisha, another senior official who attended the meeting said.

State and district-level control rooms have been set up to monitor the situation, he added.

The meeting was informed that at least 6.5 lakhs of farmers have been alerted of the possible locust attack through WhatsApp, another eight lakh cultivators are kept informed of the situation through SMS.

The state government has advised farmers not to panic over the situation and suggested them to take precautions.

The Orissa University of Agriculture and Technology (OUAT) has also issued a standard operating procedure (SOP) to deal with possible invasion of locusts.

Trading hours for agricultural commodities revised to 9 am-9 pm