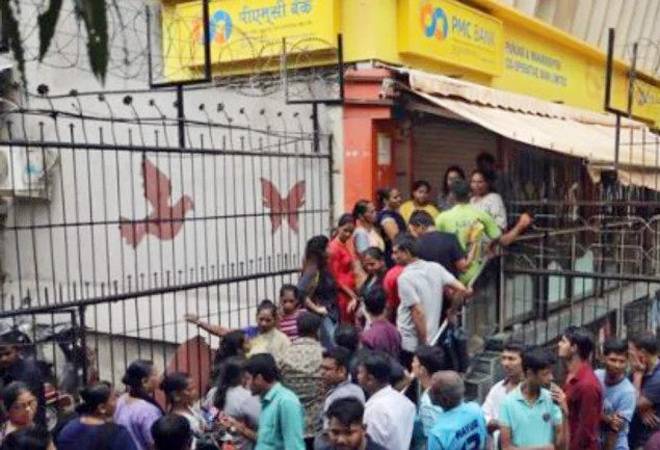 Several Punjab and Maharashtra Co-operative (PMC) Bank account holders protested in front of Mumbai's Esplanade Court on Wednesday. The demonstrators demanded imprisonment for Housing Development Infrastructure Limited (HDIL) directors, Sarang Wadhawan and Rakesh Wadhawan in the court hearing that was scheduled for Wednesday. Meanwhile, the court extended the police custody of the father-son duo till October 14.

Former chairman of PMC Bank Waryam Singh has also been sent to police custody till October 14. They will be further interrogated by the Mumbai Police in relation to the Rs 4,355-crore fraud at the bank.

"We demand that the HDIL directors should get jail, not bail in the court. Because of them, we have lost our money. We all have gathered here to make sure they don't get bail in the matter. The government is encouraging us to join digital India, but how can we join it when our money in the banks is not safe," Anita Lohia, one of the protestors told ANI.

Another demonstrator Harion Rai also told the news agency, "The withdrawal limit of Rs 25,000 is nothing. My two sons are studying CA and I need lakhs of rupees to pay their fees. So how will I manage the festive season and their fees? We want them to get jail and they should  not abscond from the country like Vijay Mallya."

Meanwhile, the probe into the Rs 4,355-crore scam at the PMC Bank, which allegedly provided loans to the bankrupt HDIL and its subsidiaries despite ignoring their dismal financials, is expected to expand further. The Economic Offences Wing (EOW) of the Mumbai police may put auditors of the embattled realtor under the scanner, sources in the know told Mint.

Top directors in HDIL have already been arrested, but now the findings of the auditors in financial reports will be scrutinised as part of the investigations. Mumbai-based chartered accountant firm Rajeswari and Associates was the legal auditor of HDIL.

The auditors of PMC Bank will reportedly also be scrutinised as they did not classify loans to HDIL as non-performing assets (NPA) as per RBI guidelines despite multiple payment defaults on the company's part. PMC Bank's cash reserves stand at around Rs 1,000 crore, which is well short of the loan given to HDIL. The bank allegedly replaced 44 loan accounts of the HDIL group with over 21,000 fictitious loan accounts, and thus camouflaged defaults by the group.

The PMC Bank fraud came to light after the RBI found irregularities at the bank and imposed restrictions on the lender. Former managing director of the bank, Joy Thomas, wrote a letter to RBI, detailing the chain of events which led to the bank's Rs 6,500 crore exposure to HDIL. This amount is four times greater than the regulatory cap or at least 73 per cent of PMC Bank's entire asset pool of Rs 8,880 crore.

Citing potential audit lapses, PMC Bank was asked by the EOW to appoint a forensic auditor to revalidate its financials, money trails and audit reports. Grant Thornton has been hired by PMC Bank as a forensic auditor. Based on the Mumbai Police's FIR, the Enforcement Directorate has also registered an Enforcement Case Information Report against the erring officials.

Reliance Jio breaks its promise; to charge for calls to rival networks