According to Bharat Electronics Ltd, the system has been commissioned through the Centre for Railway Information System (CRIS), under the technical guidance of Space Applications Centre (SAC), ISRO Phase-I of the Real Time Train Information System (RTIS) has been successfully commissioned by Navratna Defence PSU Bharat Electronics Ltd (BEL) that will provide real-time train information to the Indian Railways. This is said to help in increasing the operational efficiency, in addition to enhancing passenger safety. The RTIS has been entirely designed, developed and manufactured in India.

According to the press statement issued by BEL, the system has been commissioned through the Centre for Railway Information System (CRIS), under the technical guidance of Space Applications Centre (SAC), ISRO. 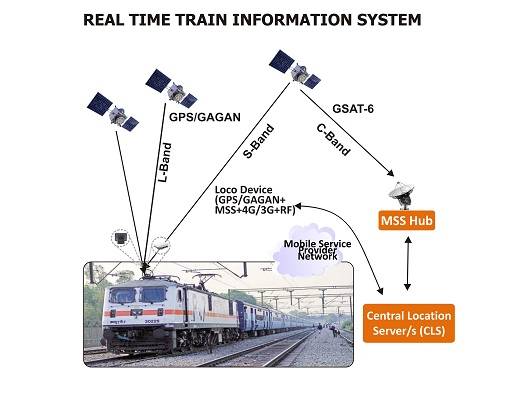 RTIS is designed to provide real-time positional information of locomotives to the Railways. It facilitates the automatic acquisition of train movement data, including that of arrival, departure and run-through timings, at the stations en route.

The control chart of trains, which has RTIS-enabled locomotives, gets plotted automatically in the Control Office Application (COA) system of the Railways. The Train Controllers can, without any manual intervention, accurately track the location and speed of RTIS-enabled locomotives/trains. Not only does the system facilitate smooth control of trains, but it also optimises traffic management, improves operational efficiency and pre-empts accidents.

The RTIS project involved installation of Locomotive Device, which tracks the location of trains using S-Band Mobile Satellite Service (S-MSS) of ISRO's GSAT 6 satellite as well as 4G/3G mobile data service, setting up of MSS Hub and Data Centre with hardware and application software at the Centre for Railway Information Systems (CRIS), Chanakyapuri.

The technology of the Locomotive Device has been indigenously developed. The entire application software, including the HUB Network Monitoring System (NMS), has been developed in-house by BEL.