Bharti Airtel, Vodafone Idea and Tata Group's self-assessed dues to the government are a whopping Rs 82,300 crore, which is short of what DoT calculated after the Supreme Court's October 24 ruling on the Aggregated Gross Revenues 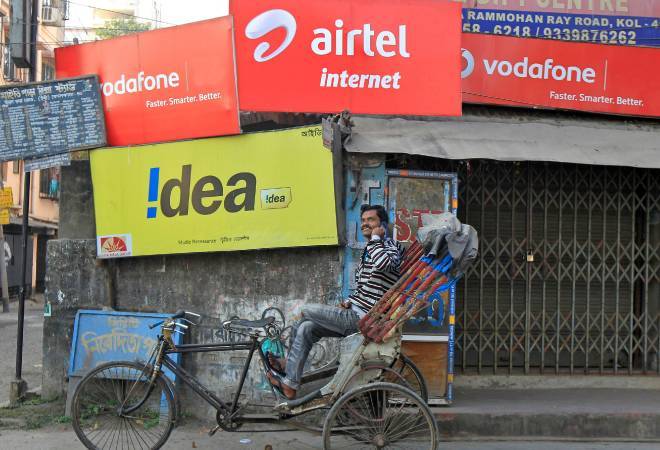 The Supreme Court on Wednesday lashed out at Bharti Airtel, Vodafone Idea and other mobile phone operators for self-assessing their outstanding telecom dues, saying they need to pay past dues with interest and penalty -- an estimated amount of Rs 1.6 lakh crore. The apex court also came down heavily on the Department of Telecommunications (DoT) for allowing companies to re-assess what they owed to the government, and said its order -- passed on October 24, 2019 -- on revenues for calculating dues was final.

A three-judge bench, headed by Justice Arun Mishra, said it would consider the government's rescue plan of giving telcos 20-year time to make the payments during the next hearing scheduled after two weeks. "Exercise of self-assessment of AGR dues by telecom companies cannot be permitted even in wildest dreams. Withdraw forthwith any such orders which been passed," it said, adding that "this is sheer fraud".

The top court said, "if we are to be very harsh, then all the MDs (Managing Directors) will be called here and sent straight to jail for contempt. They want self-assessment and commit fraud upon the public exchequer. "Through newspaper articles do they want to show that they are very powerful. Article are being published that economy will go here and there. They are fooling people by fake news. Truth must come out".

Bharti Airtel, Vodafone Idea and Tata Group's self-assessed dues to the government are a whopping Rs 82,300 crore, which is short of what DoT calculated after the Supreme Court's October 24 ruling on the Aggregated Gross Revenues (AGR). In its submission before the apex court seeking relief in payment tenure, DoT had pegged Bharti Airtel's dues at Rs 43,980 crore, Vodafone Idea at Rs 58,254 crore and Tata Group at Rs 16,798 crore.

The remaining of the Rs 1.6 lakh crore dues pertain to firms that are in bankruptcy or have already closed down. In October last year, the Supreme Court upheld DoT's position on calculating dues after including non-telecom revenues in AGR, and had ordered payment of full amount of past 15 years within three months.

When the companies dithered and filed pleas, the court threatened to initiate contempt proceedings for non-compliance. Earlier this week, the government filed a plea seeking 20-year payment scheme with a view to help the telecom sector that is already saddled with huge debt and losses arising from cut-throat competition.

While Bharti Airtel has raised funds to meet the payment demand by way of rights issue of shares and bond sales, Vodafone Idea Chairman Kumar Mangalam Birla in the past indicated that the company would fold up if it is forced to make the payments as per DoT calculations. Expressing anguish at newspaper articles interpreting its order, the top court said all MDs of telecom companies would be personally responsible and held for contempt of court for any such future write-ups hiding the truth.

The bench, also comprising Justices S A Nazeer and M R Shah, refused to take up the centre's plea for allowing telecom companies to pay AGR dues in 20 years, saying the application would be taken up after two weeks. "The time frame of 20 years is unreasonable. The telecom companies have to clear all dues mentioned in the judgment," the bench said.

The bench also said it had settled all AGR dues after hearing telecom companies and the government then had fought tooth and nail for interests and penalties. Further, the bench said it would summon the secretary and desk officer of the DoT who permitted telecom companies to do self-assessment of AGR dues.

According to the court, serious fraud was being committed by telecom companies by asserting to do self-assessment of AGR dues and that its judgment was final and to be followed in the letter and spirit.

"We will be party to fraud if we allow self-assessment of AGR dues by telecom companies," the bench said, adding that it cannot permit encroachment of its powers by allowing self-assessment. The court also said newspaper articles would not be able to influence its decision and it would draw contempt proceedings against the managing directors of telecom companies if they publish "fake news" against court on payment of AGR dues.

In its ruling last year, the apex court ruled that the statutory dues need to be calculated by including non-telecom revenues in AGR of telecom companies. It had upheld the AGR definition formulated by DoT and termed "frivolous" the nature of objections raised by the telecom service providers.

"Who has permitted this self-assessment? From where this concept of self-assessment has come up?. Who is allowing all this?. This is a sheer contempt. We have already said that no objection will be entertained on the dues. "Comptroller and Auditor General (CAG) audit has been done on the dues. It is there in our judgment then from where this concept has come out," the bench said while pulling up the Centre and the telecom firms," the court said.

The court told Solicitor General Tushar Mehta, who appeared for the Centre, that it was a "question of prestige", that telecom companies are hoodwinking and they have earned money all these years on the resources since 2001 and now they have to pay the dues as settled by the apex court. "This is public money. The government has given them resources from which they earned money.

"Your (Centre) department has given them leverage and your officers have written to them for self-assessment of AGR. We will haul those officers for contempt. Everything was before us and we heard them for months and settled for the figure of dues. The government then had fought tooth and nail for interest and penalties," the bench said.

Mehta tried to intervene and said the Cabinet has taken a decision and according to the proposal, the interest of AGR would be frozen and that amount would be paid gradually.

"If that is the case, then will test everything and will analyse how much these companies have earned over the years, how much was the dues and how much they have paid. Do you want that? Someone is trying to subterfuge our judgment. If this self-assessment is permitted, then it will be a more serious fraud on the public," the top court said.

Senior advocates Mukul Rohtagi and A M Singhvi, appearing for Vodafone and Bharti Airtel, respectively, said that no one is saying that they would not comply with the verdict but there are some errors which needs to be corrected. To this, the bench said that errors cannot be of thousands of crore and clarified that the October 24, 2019 verdict was based on the 2011 decision of apex court, which had settled most of the propositions on AGR dues and only limited aspect was dealt by the recent judgment.