Shree Cement believes in being different. So, it expanded during a downturn, and even bought a Gulf-based company. The bold bets are set to pay off.

"Any company that wants to improve has to do something new, something crazy," says Bangur, 66, explaining the thinking at the Rs 10,000-crore cement company that he runs from his riverfront office in Kolkata.

In his book, an organisation's SOP - the standing operating procedure that lays out guidelines to help work- ers execute complex operations - can at times be a "hindrance" and what is then required is adjustment. "So, we try something crazy".

Shree Cement's annual report for 2016/17 extends the "crazy" philosophy further, starting with an epigram on the cover that says, "Being Crazy is Heavenly"; it also features a Jack Ma quote in an inside page: "We are crazy, but we are not stupid." Bangur gives the concept of craziness a local tweak: "At Shree, we do not think normal, we think different." This "craziness" is, perhaps, reflected is the expansion drive that Shree Cement has embarked upon, even though oversupply and low demand over the past three years have forced Indian manufacturers to oper- ate below capacity.

Data from the Cement Manufacturers' Association of India pegs the country's annual production at a little over half the installed capacity - 296 million tonnes (MTPA), as against a capacity of 502 MTPA. Often, at times like these, companies go for greenfield expansion to consolidate market share and feed emerging markets.

Shree Cement has taken this to another level, initiating both organic and inorganic growth - in Chhattisgarh, Jharkhand, Orissa, Rajasthan, Bihar, Karnataka, Bengal and Odisha. This is in addition to its plants in Uttara- khand, Haryana and Uttar Pradesh.

At present, the company produces some 37 MTPA cement at its existing units; after expansion, this is expected to touch 45 MTPA. The expansion may not prove crazy in the end as there are already signs of revival. An industry research note by CARE Ratings in November says the domestic cement industry clocked "robust growth of 14.4 per cent" in the first half of the current fiscal, driven primarily by government initiatives.

The most interesting gambit by Shree Cement, last year, however, was its biggest acquisition ever - and also its first venture outside India: a 97.6 per cent stake in Union Cement Co (UCC) in Ras Al-Khaimah, UAE, which has a production capacity of four MTPA. With a facility near the Saqr port, UCC exports half its output to other countries in the Gulf region and East Africa, according to the regulatory filing by Shree Cement. "In cement, you have to think international and act local," says Bangur.

But not everyone seems to be convinced by the company's moves. Says Milind S. Raginwar, Senior Analyst, Institutional Equities at Nirmal Bang: "The first mover advantage that helped initially has been waning." Shree Cement was strong structurally in finance and operations, but "this was when it was a single location cement manufacturer; with geographic expansion, it also faces challenges." 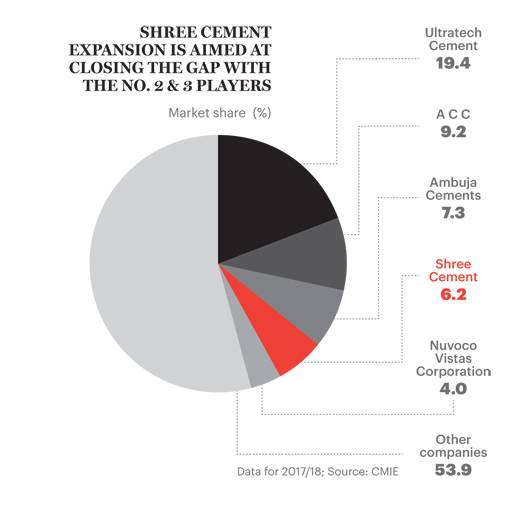 But for Bangur, challenges such as slumps are not new. Back in 2002, a four-year downturn found Shree Ce- ment saddled with excess capacity and bank loans at 19 per cent; desperate for a bailout, the Bangur family agreed to a 50-50 ownership deal with the French group Vicat. It was a win-win for both. The French company wanted entry into India and the Rs 800 crore valuation of the Indian entity suited it, while the Bangurs wanted ready cash to reduce the sapping debt burden. "Everything was ready," recalls Bangur. "We even planned a champagne party."

However, what no one had bar- gained for was a change of heart for Hari Mohan the night before the agreement was to be signed. A 50-50 deal did not seem right on two counts. First, there was a question mark over who would run the company. Second, Bangur feared dilution of family stake in the coming years. He took a crazy call. Staking all, he decided to go it alone.

"I took a helicopter view," says Bangur about his decision, an approach inspired by Warren Buffett, whom he ad- mires. The slump had to end, demand had to pick up, what was needed was the will to ride out the downturn. Today, we know it was not a crazy step after all. With net sales of Rs  9,833 crore and net profit of Rs 1,348 crore in 2017/18, Shree Cement is the fourth largest cement company in India by revenue.

However, it is fundamentals that make Shree Cement the most sought- after stock among the peer group. British cement consultancy White- hopleman, which reviewed eight Shree Cement units in 2016, gave the company a four-star rating, a notch below the previous year's highest five-star rating.

Much of what Hari Mohan Bangur has achieved stems from his hands- off approach. He is not known to visit the plants often, preferring to leave the units in the care of professional manag- ers. It is something he has started do- ing with the Common Aptitude Test as well; he no longer sits for it, but encourages his staff to. "They do not get a salary hike or anything like that, stick in our minds."

Anik Basu is a freelance writer based in Kolkata