The right decisions are always the toughest to make. Billionaire Mukesh Ambani took almost three years to make up his mind about investing in telecom business in 2010. It took another six years to design and build the digital ecosystem for the disruptive foray of Reliance Jio with 4G. India's most profitable company, Reliance Industries (RIL), has invested nearly Rs 3 lakh crore in its subsidiary Jio so far.

"Competitive cost positions and integration benefits is core to our oil to chemicals (refining and petrochemicals) business, driving sustained performance even in challenging global business environment," Ambani recently said. Buoyed by the growth of petrochemicals and telecom, RIL's consolidated profit grew 20.6 per cent to Rs 36,075 crore in the last financial year, on a revenue of Rs 4,30,731 crore, which went up 30.5 per cent. In the first nine months of this financial year, the profit grew 14.4 per cent to Rs 29,226 crore, while revenue grew 55.6 per cent to Rs 4,69,326 crore.

The market capitalisation of RIL jumped 142 per cent to Rs 8.15 lakh crore in the last two years until January 2019, making it the most valuable company on the stock market, ahead of TCS (Rs 7.6 lakh crore) and HDFC Bank (Rs 5.7 lakh crore). However, as a business group, the Ambani conglomerate is behind HDFC and Tata groups in total market value.

Mukesh Ambani's elder son Akash, who completed five years in RIL, is now in charge of strategy and development in Jio. His daughter Isha - who recently married Anand Piramal, son of industrialist Ajay Piramal - has been working with the retail business, and his wife Nita Ambani is on RIL's board.

Cash flow from the refinery business has propelled RIL's bottom line in the last two decades. After Ambani took over as chairman of RIL in 2002, the company built its second refinery, forayed into retail business and ventured into exploration and production (E&P) of oil and gas. Of these, the export-oriented refinery has taken off well, but retail failed miserably in the initial phase. The E&P business also nosedived.

RIL made an investment of nearly $10.5 billion in E&P at the Krishna Godavari (KG) basin but failed to scale up production, and faced the ire of government agencies. But statistically, RIL recovered most of its costs through the sale of 30 per cent stake in its upstream assets to BP Plc at $7 billion in 2011 and through sale of gas. In the last two financial years, the loss from RIL's E&P business stands at over Rs 3,000 crore. In 2017, Ambani and BP Plc Chief Executive Bob Dudley came together to announce a Rs 40,000 crore investment in E&P to revive production. But it is not yet clear when the results will be seen.

The on-streaming of the Rs 25,000 crore second refinery 10 years back did wonders for the company's cash position and it was debt-free until 2012. At that time, a common complaint used to be that Ambani was not deploying the accrued cash in business. Following that he made acquisition of shale gas assets in the US, but the high cost of asset development and falling crude prices post-2015 made the business unviable; RIL exited from some of the assets.

Though Ambani bought spectrum in 2010, his 4G plans were slow moving until 2014. In September 2016, Jio commercially launched its operation, and the subscriber base grew to 280.1 million in December 2018, inching close to Bharti Airtel, which lost 57 million subscribers in December 2018 and ended up with 284.2 million. The largest telecom player Vodafone Idea, which has 421 million customers, lost 6.5 million subscribers in November.

Jio aims to get to 99 per cent coverage by May 2019, according to a Morgan Stanley report. The capital expenditure in the first nine months of Jio reached $7 billion. The foreign brokerage expects the total capex to reach $8 billion in this financial year and $6.5 billion next year.

Parallel to Jio, RIL made another huge investment, about Rs 1.5 lakh crore, to build the world's largest refinery off-gas cracker and its downstream units, and a para-xylene plant. The pet-coke gasification project will transform Jamnagar into a unique bottomless refinery. "While recently refining margins were weak, RIL has been relatively insulated due to its integration advantage. Petcoke gasification start should boost refining margins," Nomura states in a report. However, Kotak Institutional Equities states that "the recent sharp deterioration in refining and petchem margins may compound woes in the near term." 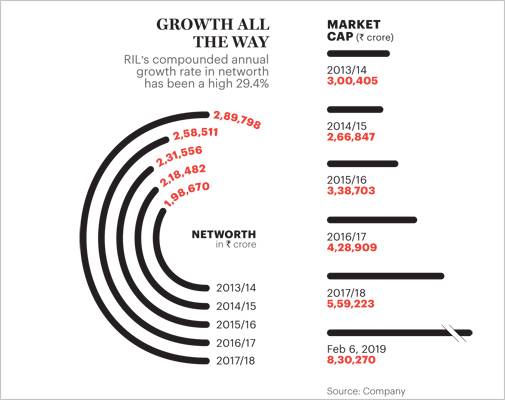 The investments have burdened the company with a gross debt of Rs 2,74,381 crore. Ambani has, however, promised at a shareholder meeting that the company will again become debt free.

Moving in tandem are RIL's consumer businesses. Reliance Jio is preparing the ground for an entry into home broadband services and recently bought majority stakes in cable operators DEN Networks and Hathway Cable. This will give the company an advantage in its fibre-to-home business and further threaten the non-mobile business of rivals such as Bharti Airtel.

At a recent shareholders' meet, Ambani said Jio is committed to building a deep-fibre network across India and its GigaFiber home broadband services would offer complete fixed-mobile convergence, where the users would be able to travel seamlessly between both mobile and broadband networks. Jio's goal, he said, would be to offer 4G and 5G coverage when on the move and WiFi when indoors.

Another customer focussed business, Reliance Retail, posted 104.9 per cent growth in revenue to Rs 69,198 crore in the last financial year, while profit before depreciation, interest, and taxes (PBDIT) grew 114.5 per cent to Rs 2,529 crore. The company posted a profit of Rs 1,243 crore, according to its annual report. In the nine months of this financial year, the revenue grew by 109 per cent to Rs 93,903 crore. PBDIT grew by 195 per cent to Rs 4,278 crore. The retailer received a footfall of over 57 million across its stores during the Diwali festival period, up 25 per cent from the same period last year.

Reliance Retail has jumped 95 places on Deloitte's Global Powers of Retailing 2019 index to reach the 94th spot as revenues have soared on the back of growth in grocery, consumer electronics and fashion and lifestyle segments. Reliance Retail, which operates 9,907 stores in over 6,400 towns and cities, is India's largest retail chain, both by revenue and the total number of stores.

Over the past five years, the business has grown at a massive 45 per cent annually - doubling every two years. "Reliance Retail ranks among the world's Top five fastest-growing retailers," Ambani said in the annual report.

RIL is now a cluster of businesses, and there are possibilities of unlocking value in the company, say experts. Retail and telecom have the potential to become independent businesses. But it is up to the company to decide when.