2017 is a year of correction; good times will have to wait.

It's the norm these days. One start-up that applied for Business Today's Coolest Start-ups survey described its performance in two words: "5X Growth". The jury, which included four venture capitalists, cracked up. "From what base", a jury member asked. There wasn't a base number. Another start-up wrote it could not disclose revenues. The jury refused to spend time discussing such a company. "It often means their revenues are embarrassingly small," a jury member quipped. All of them mostly thrashed copycat ideas, consumer businesses that wouldn't scale up or those where building a brand would involve too much time and money.

Instead, they preferred companies with simple ideas executed well, where product innovation was palpable, teams were strong, and which had demonstrated resilience in a tough competitive or operating environment.

The bar is now high - and the jury meet reflected that. Far fewer deals are being cracked than a year ago as the Indian start-up ecosystem stutters through a period of correction after the excesses of 2015, when, at times, deals were closed in 24 hours. The flow of easy money is down to a trickle. Venture capital investments slid 32 per cent to 162 deals worth $624 million in the first six months of 2017, compared to the same period in 2016 data from research company Venture Intelligence show. The first half of 2016 had seen 238 investments worth $693 million. Compare this to the heydays of 2015 when 253 deals worth nearly a billion dollars were struck in the first half. In the last six months of 2015, 283 investments crossed the billion-dollar figure yet again. Investments by angel networks and super angels declined nearly 50 per cent to 57 deals in the first six months of 2017, compared to 106 in the same period a year ago, according to Venture Intelligence. Seed investments fell 53 per cent, Series A 7.5 per cent and Series B 43 per cent.

"While the challenges in consumer Internet and mobile sectors had become apparent last year, they are beginning to reflect quite starkly in terms of VC investment figures," Arun Natarajan, Founder and CEO of Venture Intelligence, noted in a statement. "While investments in consumer Internet and mobile have fallen by half, VC investors displayed sustained interest in fintech and enterprise software start-ups right through the year. And given the plentiful capital in the system, once the dust settles on the consumer Internet front, newer themes like health tech and deep tech should emerge stronger on radars of investors," he added. The consumer Internet segment saw 80 investments in the first six months of 2017 versus 151 in the year-ago period.

Roma Priya, a lawyer and Founder of Burgeon Bizsupport, a company that structures start-up deals, says contractual terms of the investments have not materially changed. However, inflated pre-money valuations are not being appreciated any longer. And angel investments, where money is stitched from various individuals, are taking longer than usual. "The process of closing a transaction is longer. During the upturn year, individuals made a lot of instinct-based decisions. Now, they are evaluating returns, what the founders did with previous funding, etc. They have learnt from investments made four years back," she says.

This correction isn't necessarily a bad thing, say investors. "We have gone from irrational exuberance in the consumer Internet industry to a sense of normalcy. I don't think we want to return to those yo-yo years," says Sharad Sharma, an investor and co-founder of start-up think-tank iSPIRT. Sharma was on this year's Coolest Start-ups jury. "That created resonance in the market; people chased valuations rather than creating businesses. Salaries were crazy. That was an irrational period and I don't think there is any desire to go back to that. The Indian ecosystem's capacity to handle irrational exuberance is low, because it causes more pain in the absence of exits," he adds. One needs to look no further than Snapdeal to understand how difficult things are in India. Snapdeal, India's third-largest e-tailer, recently terminated talks for a merger with Flipkart, a deal that would have helped its early investors exit while creating an Indian front against Amazon. Vani Kola, MD at Kalaari Capital, one of Snapdeal's investors, told a television channel that she was "extremely disappointed" as the founders disregarded the interests of investors and employees.

Snapdeal made many errors typical of start-ups during the upturn - it chased gross merchandise value and acquired multiple companies in sectors not core to its business, which resulted in depletion of resources. Investors are no longer willing to tolerate such adventures.

T.C. Meenakshisundaram, Founder & Managing Director, IDG Ventures India Advisors, says it takes about 18 months for the correction to go through. "Our view is that the bar is high. Most people have come out of euphoria of 2015. For example, in 2015, many foodtech companies got funded by some form of institutional investment. I don't think that will happen anymore. People will be fairly cautious. For a Series A funding, one requires decent traction. At a seed level, we are looking at fairly differentiated and defendable intellectual property-driven plays," he tells this writer on phone.

So, what's in store for the rest of 2017 and beyond? Sharad Sharma thinks Three Ps will gain prominence - Patanjali, Paytm and PhonePe. He doesn't imply these three companies but the markets they address - the Bharat market, or the non-metros. "Companies have realised that the 'India One' market is not as big as people made it out to be; it is much smaller. Real India lives where Patanjali and Paytm are going to make money. Here, copy-paste kind of business models don't work. They have to invent the right business model. To reflect this, new funds are coming up," says Sharma.

IIM-Ahmedabad's Centre for Innovation Incubation and Entrepreneurship is coming up with the Bharat Innovations Fund. Aspada, another venture capital company, is looking to close a new fund, of over $100 million, that will provide capital to companies catering to the Bharat market. 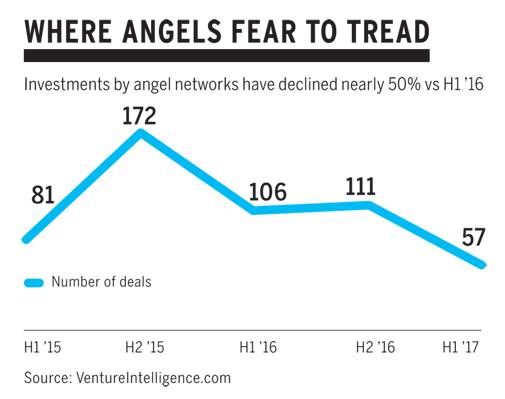 "Our philosophy is based on investing in businesses that serve the big middle of the country - people with household income of `2-10 lakh per annum," says Sahil Kini, a Principal at Aspada. "That is why we invest so heavily in agriculture. Six out of our 16 investments are in agriculture; four are in financial services because we believe they don't have access to enough credit; then there are education and health care. All our future investments will also be in these areas because we feel very deeply about this philosophy."

Kini leads financial services investments for the firm. Aspada has invested in NBFCs such as Capital Float and NeoGrowth, companies into SME loans. "India needs a lot of financial services. A lot of it will open up because of UPI. Fintech is narrowly viewed as payments and consumer lending. That's not correct. There is a lot of stuff around business lending, GST, and micro insurance. Those will continue to be built," he says.

While lending will continue to gain traction over the next 12 months, investors are already citing caution. "In the lending space, we have a chicken-and-egg situation. One needs to see a good track record, but to build a track record, one needs some funding. Not many new deals will get done - more and more funding will go to people and will better track record of lending and recovery," says Meenakshisundaram.

Apart from fintech, artificial intelligence-based start-ups are likely to remain hot this season. So would content companies, with cheaper data and growing smart phone usage in the country.

Every cloud has a silver lining.