Over the past decade, when everybody was focusing on solving problems of end consumers, Rahul Garg, founder and CEO of Moglix, was looking to find pain points of businesses and how to resolve them. He started out with a simple statement in 2015: "How can we re-imagine B2B commerce with technology?" And he entered a segment which had not seen innovation in a long while, and that is how the B2B e-commerce startup came in to being.

Moglix offers products from over 30 categories - from electrical to safety bearings and fasteners - is also simplifying procurement and supply chain processes. It serves both large- and mid-sized companies. Moglix says it has 300 large manufacturers as clients and that over 200,000 SMEs have transacted on its platform. Recently, the company started developing business applications to help solve taxation and supply chain problems. Its clients range across automotive, FMCG, steel, chemical, pharma, oil and gas sectors. To supply across India, it has established fulfillment centres in Delhi-NCR, Chennai, Mumbai, Pune, Ahmedabad, Kolkata, Aurangabad, Maharashtra and Pant Nagar, Uttarakhand. It has 5,000 suppliers across 25 states and in multiple countries.

When it started out, building a start-up serving businesses was unheard of but fund raising was not a challenge. Garg says since 2015 was a boom year and they were asking for a smaller amount they got funding easily. Till date, it has raised $18 million from International Financial Corporation, Accel Partners, Jungle Ventures, Venture Highway, SeedPlus and Rocketship in three rounds of funding. Ratan Tata too is an investor. 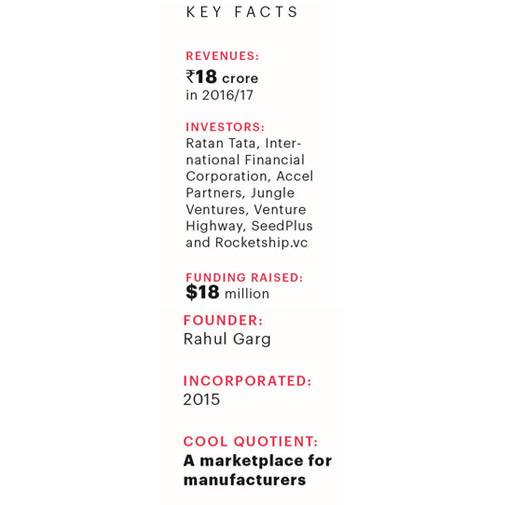 However, attracting the right talent was tough in the initial days. "It was tricky because in 2015 there wasn't that much glamour to the B2B sector. But we attracted the right set of folks," explains Garg. Also, since the space is nascent, everything has to be built from scratch. "We have been building on what needs to be done - what problems buyers have, what problem suppliers have, what are the transport logistics, how does the payment cycle work? I think there was a fair bit of complexity," he adds.

Moglix has developed a SaaS (software as a service) platform for its customers, which they are using across their entire supplier base and charge a fee for the subscription. They also take a cut of 5-15 per cent of every transaction channeled through them. The company usually gets big-sized deals and they could go as high as `45 lakh. One SaaS offering is a GST supply chain product, which it introduced to help customer when the new tax regime came in force. In fact, with the introduction of GST, the company saw a boost in demand for its services as it brought processes as well as organised supply chain to the B2B world. They announced their GST product in November last year and claim that $4 billion worth of GST goes through them.

Scalability is often a question when it comes to B2B companies. Most experts state that the largest organisations globally are consumer-facing. However, operating in the B2B space has its own advantages. To scale up you don't need to necessarily incentivise your products by offering discounts and spending on customer acquisition.

"Here you are growing at a more normal pace, at which a healthy company should grow versus an incentivised or a buyout growth," says Garg. "Also, the consumer is a lot less finicky and may not go away as soon as you stop offering discounts." Repeat customers are higher and this makes for better financials.

The company claims it is Ebitda positive and will be profitable in fiscal 2019. For now, it is in expansion mode. It recently opened centres in eastern India and has been hiring people aggressively. Currently, it employs 360 people.

"We are at the cusp of growth and the next year is about crossing that scale. We are more focused on organisation building, so we are doing a lot to build capabilities and train people, as this is not a sector that people have been trained in," Garg says.