The founders of GROWW want to make it the Amazon of the financial services space.

Lalit Keshre is a start-up junkie. In 2010, he founded a marketplace for teachers and students, EduFlix, where teachers could stream videos. The company ran for over two years but hit the bandwidth challenge as video transmission, five years ago, was not fast enough for uninterrupted streaming. The company shut down.

Keshre joined Flipkart in 2013 as part of a team that launched its marketplace. Later, he incubated a company within Flipkart to solve last-mile delivery problems.

Flipkart is also where Harsh Jain, Neeraj Singh and Ishan Bansal worked. The four quit to start Groww in 2016. The idea was to start a company that leverages technology to create an impact in the consumer space. The founders saw a huge gap in delivery of financial services in India. The penetration was low and small investors found it difficult to invest in mutual funds, buy insurance or apply for loans. Mutual funds, for example, are agent-driven. The agent tells investors which funds they should invest in. But he services those who have a lot of money as mutual fund selling is mostly commission-based. There is no incentive to advise very small investors.

"Consumer experiences were disrupted in e-commerce and cab services. However, financial services was still old school. Plus, there was lack of transparency," says Keshre. "We thought we could build a scalable product that anybody could use. Buying financial services should be as simple as buying on Amazon or Flipkart." Groww, which has raised about $2 million from Y Combinator, Insignia Ventures, Mukesh Bansal and Ankit Nagori, among others, started as that platform. Today, it is an app where one can both learn about and invest in mutual funds.

Keshre keeps going back to disruption in e-commerce. Amazon and Flipkart started with books as they were commoditised and so simple to sell. This got people into a habit of buying online. "Similarly, we picked mutual funds. It is simple and good for retail investors. The long-term vision is to make finance easy for users like us or build an Amazon of financial services. We will add products such as stocks and government schemes," he says. 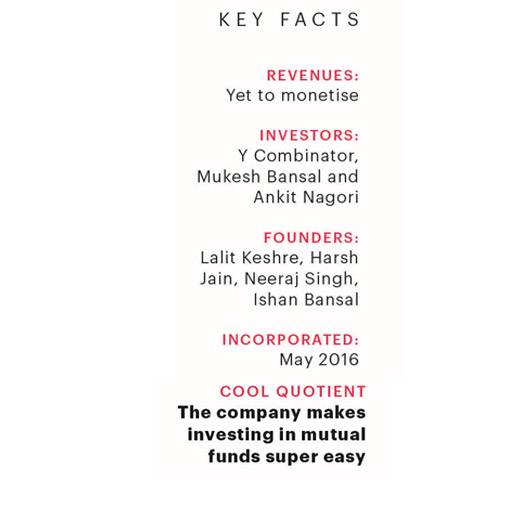 Groww charges no commission on transactions. This appears to be its biggest differentiator, apart from the neatly-designed app - the app summarises funds with good returns and has a section on 'handpicked collections' that segregates funds into 'Top Tax Saving Funds', 'Top High Return Funds', 'Top Large Cap Funds', etc. If you scroll down further, there is a 'Learn About Mutual Funds' segment and videos. One can invest and also create a portfolio with ease.

"There are companies which are trying to solve the problem of purchasing mutual funds online (Groww competes with PayTM Money, Fundsindia, ETMoney and Cube Wealth). However, we hand-hold users and help them learn about the various products through the content on the app," says Keshre.

It is early days but over time a network of advisors would help users interested in investing; there are about 300,000 users now. Groww is also experimenting with a freemium model around advisory services and tools. The number of transacting users is growing at 50 per cent every month, says Keshre.

There is work left to be done. While most users rate Groww's interface highly (on Google Play), there are those who want changes. One user, Venkata Ranganathan, writes: "The app is good and simple but its competition like Paytm Money provides more information on mutual funds. Hoping to see those improvements soon."