Chai cafes are multiplying, becoming as aspirational as coffee chains and attracting investment.

It fills the mandatory cup many of us reach for first thing in the morning; it lifts mood, banishes languor and speeds up bonding with co-drinkers. India is a tea-drinking nation, consuming - according to National Sample Survey Organisation data - 15 times more tea than coffee, but until recently, the number of upmarket cafes in the country emphasising the variety and quality of their tea were just a handful. Tea was usually prepared in homes, or bought dirt cheap from roadside chaiwallas. This was in striking contrast to coffee, which following the rise of Cafe Coffee Day, Barista, Costa Coffee and others in the past two decades, has become an aspirational drink, for which customers shell out fair sums.

However, in the last few years tea has begun to go the way of coffee, with the growth of chai cafe chains across urban centres - brands such as Chai Point, Chaayos, Tpot, Chai Thela and Tea Trials. Bengaluru-headquartered Chai Point, for instance, starting in 2010, has expanded to eight cities and recently opened its 100th outlet, and maintains it sells 300,000 cups of tea a day. Not far behind is Chaayos, begun in 2012, with 52 cafes in Delhi NCR, Mumbai and Chandigarh. Both have made an impact strong enough to win the support of hard-nosed investors. Paragon Partners led the clutch of venture capital funds which put $20 million (about Rs 148 crore at $74.15 a dollar) into Chai Point in its third round of series funding this April, while Chaayos opened 25 cafes in last 10 months with Rs81 crore of Series B round of funding from SAIF Partners, Integrated Capital and Pacatolus.

Neither Chai Point nor Chaayos is profitable yet, but both are confident that given their growth curve, they soon will be. Chai Point's revenue rose to Rs 59 crore in 2016/17, against Rs 39 crore the previous year, though its losses increased to Rs 38.5 crore from Rs 20 crore in 2015/16. "Operationally, each one of our 100 stores is profitable, but we are also investing heavily in supply chain, technology, etc., which are eating into profits," says Amuleek Bijral, Founder, Chai Point. "But these are one-time capex expenses and once in place, will contribute to both our top- and bottomlines. We expect to be profitable by the end of this fiscal." Chaayos's founders are similarly upbeat. "We are operationally profitable and looking to generate net profit in FY 2018/19," says Chaayos Co-founder Raghav Verma. Chaayos's revenue increased to Rs27.6 crore in 2016/17 from Rs12 crore in 2015/16; losses grew marginally to Rs16.3 crore from Rs14 crore.

The business plan is straightforward - to grow into a market leader first, with profitability coming in its wake. It is the opposite of the traditional approach which favours growing conservatively and achieving profitability first. "Companies have different views and both approaches are correct as long as they work," says Ankur Bisen, Senior Vice-President, Retail and Consumer Products, Technopak - a management consulting firm. While this is not the first time chai cafes have sprung up - some start-ups tried and failed in the early 2000s - one indication of their impact this time is that they have induced some of the leading tea producers to follow suit. Ahmedabad-headquartered Wagh Bakri has set up 15 'tea lounges', Kolkata-based Goodricke Group and Tata Global Beverages four each. "We want to introduce our brand to people and make them understand what good quality tea is," says Vikram Gulia, Vice-President, Goodricke Group.

Getting the Fare Right

There are numerous varieties of tea and tea making, which makes catering to individual taste difficult. But there are six basic categories - black, green, oolong (Chinese), yellow, white and fermented tea - which can be further subdivided by the way they have been processed. Black tea, for instance, can be either CTC (crush, tear and curl) or orthodox (leaf tea), with flavour also varying according to the region where the tea was grown - Darjeeling, Assam, the Nilgiris, etc.

There is 'kadak chai', 'cutting chai', 'Irani chai' - and indeed, many tea lovers have their own way of brewing tea which they believe tastes best. Pankaj Judge, Founder, Chai Thela - started in 2014, with 16 outlets across Delhi-NCR and Mumbai - recalls an incident at one of his cafes where a middle-aged female customer wanted to brew her own tea. "She was willing to pay three times the price to be allowed to do so," says Judge. "She intended to use some chai spice she was carrying with her."

To accommodate changes individual customers might want in the tea-making process, Chai Thela has stuck to the traditional stove-and-pan method of brewing. Chai Point and Chaayos, in contrast, use machines, believing that consistency of every cup is more important. Chai Point has codified 65 different flavours at its Mountain Trail Academy, with centres in five cities, where it trains its staff before assigning them to outlets - and sticks to these. "People have their tea preferences, but they want the same cup every day," says Bijral.

Chaayos has developed a robot in-house, which it calls Chai Monk, to standardise its tea, and which has so far been employed in seven of the 52 cafes, but hopes to cover all of them by end of the year.

The chais, priced at Rs 80 per cup or more, are significantly cheaper than coffee at similar spots. But there is a difference - coffee chains can justify their prices not only by the ambience they offer, but also because they virtually introduced Indians to European-style coffee - like cappuccino and latte - which were not widely available earlier. Tea, familiar to Indians in many varieties, has no such aspirational pull.

"Still, India is a huge market and there is not much competition in this space so far," says Pinakiranjan Mishra, Partner and National Leader, Consumer Products and Retail, EY - a global financial services firm. The demand for quick service restaurants is also growing, so these chains may be on to a good thing. 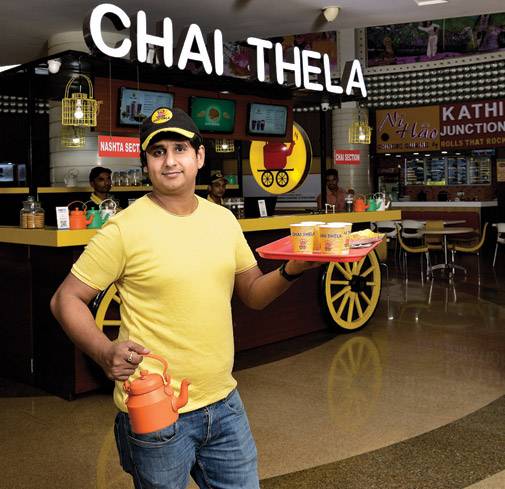 Chai cafes are also trying to buttress their fare, and justify their prices, by offering a range of food accompaniments - pakoras, poha, cake rusk, mathri and more, to go along with the tea. "Indian consumers like to complement their tea or coffee with a snack - light or heavy, which is quite different from global food consumption trends at retail cafes," says A. Venu Madhav, CEO, Cafe Coffee Day. Thus Chai Point has created a separate brand 'Made for Chai' which offers packets of mathri, cake rusk, fox nuts, banana chips and more.

Some chai cafes have gone even further. Chaayos, for example, provides an entire range of light and heavy savouries. At its tea lounges, Tata Cha - as the cafe arm of Tata Global Beverages is called - even provides full meals with its tea - dishes such as paneer khichri, butter chicken khichri, chhole kulche, rice and stew, and more. Starbucks confirms this quintessential Indian trend by noting that 25 per cent of its sales in India are food products - the highest in the Asia-Pacific region.

The success of a food and beverages (F&B) venture also depends critically on both the location and nature of its outlets. "It is critical to be present at prominent locations in cities to generate visibility and reach a wide consumer base, however, the rents for these are high as well," says Madhav of Cafe Coffee Day. "Increasing real estate cost is a major challenge."

Chai chains are doing the same within the limits of their resources. Chaayos started with standalone cafes, but has now opened outlets in food courts, malls and along highways. "People like to have tea while travelling, but highways often don't have good options where they can sit down and have it," says Saluja. Chai Point began with outlets in tech parks and office-dominated areas, but has since moved into malls, high streets and high-end hospitals as well. Chai Thela, in keeping with its name, has set up carts in food courts and large restaurants like Haldiram's, along with kiosks in tech parks and a big cafe in Delhi's Fortis hospital. "Sales at 'cart' and 'store-in-store' outlets are not as much as at kiosks in IT parks or in hospitals, but the former help to establish a brand presence," says Judge. Kiosks and carts also need less investment and enable faster break-even than cafes. "Earlier, organised F&B players only had the options of malls or high streets, but now there are many more (options) such as metro stations, transportation hubs and highways," says Bisen of Technopak. The new chai chains deliver tea to homes and offices as well, taking orders online. Despite the relatively high cost of their fare compared to brewing tea in the kitchen, they have found a sizeable market. "About 20 per cent of our revenue comes from delivering orders and 50 per cent of these are to homes," says Saluja of Chaayos. It is easy to see why - the growing numbers of people who find themselves pressed for time, not money. "My life is so busy that by getting quality chai delivered at home, I simply have one thing less to worry about," says Aparajita Bharti, Co-founder, Young Leaders for Active Citizenship. Chai Point launched a special Chai on Call service, complete with mobile app, in 2017. "By May 2018, we had delivered one million chai flasks," says Bijral. 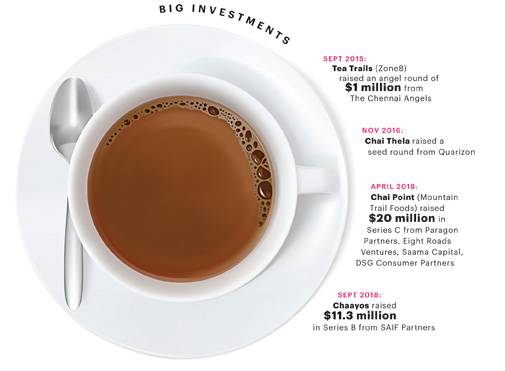 Ultimately, the biggest advantage of the tea chains is the ingrained Indian dependence for tea. "Chai is a must to get my brain cells working," says Deepti Bhattacharya, a media professional. "At brainstorming sessions at work or in strategy meetings, many of us need tea to contribute effectively and chai cafes have become an obvious choice for sourcing it." For other tea lovers, chai cafes are also a refuge from the families and workplaces. "My 'me-time' consists of a half-hour at Chaayos after a long day at work where I can sit in silence," says Delhi-based communications professional Supriya Singh.