MPW: Why Women Remain a Minority in India’s Startup Ecosystem

Despite venture capital investments continuing to shatter records and more unicorns popping up than ever before, the number of women-led start-ups, investments they raise, and even the count of women investors, remain low

“Even after a decade of running a fast-growing and profitable company, I had to experience someone calling me ‘emotional’ when I disagreed with their unsolicited business advice. Once, my COO (chief operating officer) and I went to meet someone who refused to acknowledge my presence and only spoke with my COO, assuming I was there to only take notes. I was also ‘advised’ against having a woman CFO because I was already a woman CEO, something that simply doesn’t happen in companies where the entire management and board are men.”

There may be a growing refrain calling for gender equality in the workplace, but the experiences of Hardika Shah show this may merely be lip service or an exercise in ticking the box. The Founder and CEO of Kinara Capital, which works on financial inclusion for small business entrepreneurs, says the systemic conditions make it difficult for most women to run their own business in India.

That holds true even for women entrepreneurs who are well educated, have a financially sound background, and know people in the start-up ecosystem. Take, for instance, Priyanka Gill. The Founder of POPxo, a womenfocussed digital community platform, says that at one pitch meeting, she was asked why she was looking for venture capital instead of asking her husband Raj, a London-based trader, for funds. “Raising capital is hard. For female entrepreneurs, it is harder,” says Gill. Regardless of their background, she adds, women still have to battle the inherent conscious and unconscious biases, including the age-old questions on juggling a career and family, to secure investments. 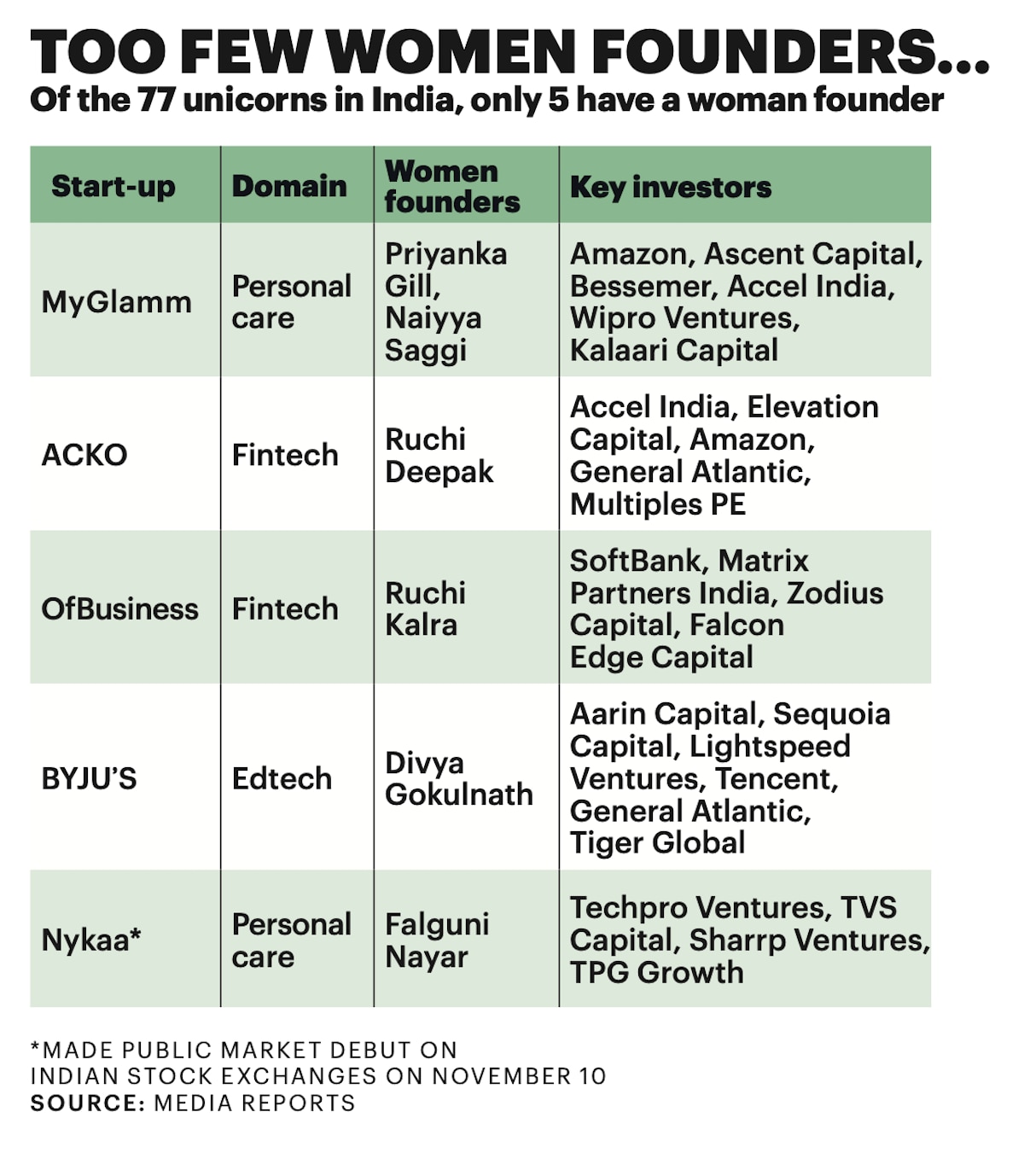 No wonder, then, that according to Shah, less than 6 per cent of all start-ups in India are founded solely by women. “Despite being the world’s fastest-growing major economy, India ranks low, at 70th among a list of 77 countries covered in the Female Entrepreneurship Index, because of a lack of [family and financial] support, infrastructure and opportunity that would make it possible for women to enter the formal workforce,” she says. And if they do, with the idea to start their own venture, they have to fight the odds right from kickoff.

A strong support network is crucial to secure earlystage funding. Founders with access to the coterie of entrepreneurs and investors find it easier to get backing for their ideas. Women founders, in most cases, don’t have inroads to these networks because they originate from the IIT/IIM dorm rooms which, more often than not, are male bastions. Women only account for about 20 per cent of students at the IITs even after they introduced a ‘supernumerary quota’ in 2018-19 by adding additional seats reserved for women.

“Women raise far less money than men. They raise money at a lower base, so you are undercapitalised pretty much from the get-go,” says Gill. “It means they have to go to the market sooner than their male counterparts for the next round, which gives them lesser time to show the traction that will make the next round possible.”

Indeed, globally, investments in companies with a woman founder/co-founder averaged $935,000, less than half the average of the $2.1 million that male-run firms attracted, according to a 2018 study by Boston Consulting Group and MassChallenge, a US-based global network of accelerators. Ironically, the same study also found that start-ups founded or co-founded by women generated 10 per cent more in cumulative revenue over a five-year period. “It makes business sense to invest in women,” says Naiyya Saggi, Founder of online parenting platform BabyChakra. “The opportunity lies with women because they are the next wave of consumers. Also, it makes all the more sense to invest in women who are solving for women, because they understand the consumer journey better. Therefore, you need creators of the new economy coming from the people you intend to be consumers of the new economy.” 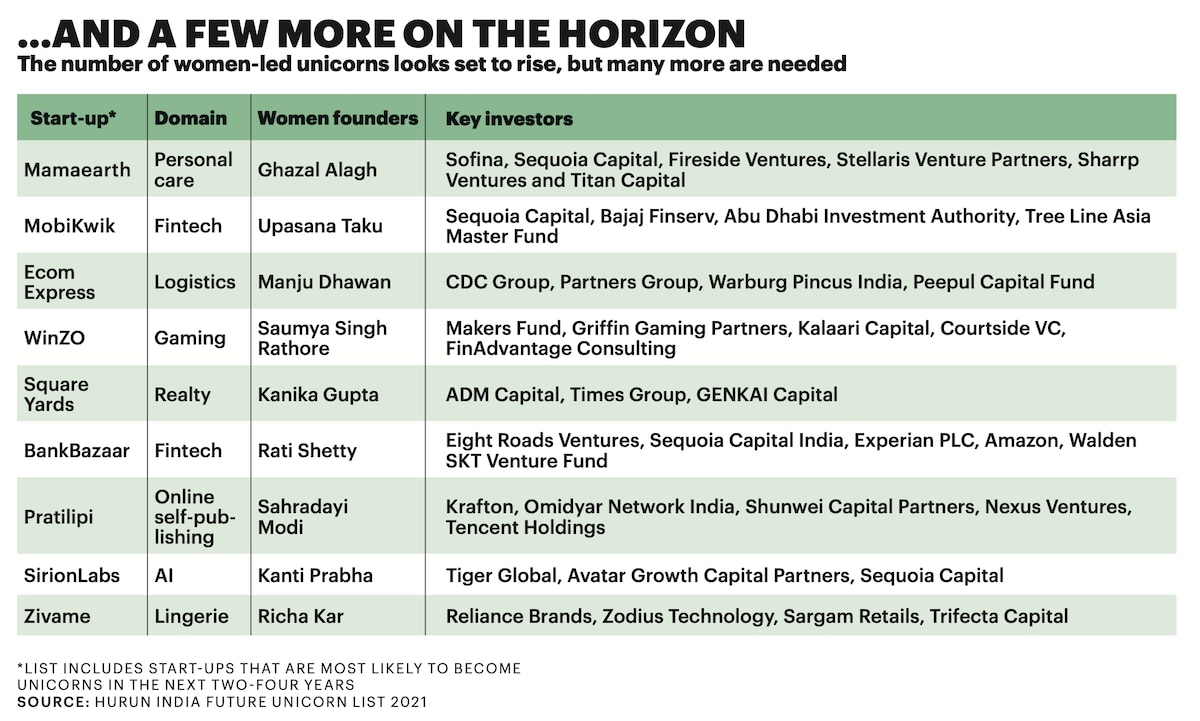 If women founders do manage to secure support and funds in the early stage of their start-up life, this peters out as they progress on their entrepreneurial journey, a senior executive at a non-profit social impact advisory firm, who wished to remain anonymous, said. A research by the US-based firm’s India arm shows that the representation of women founders is less than 1 per cent in growth-stage funding rounds, meaning investors sidestep women-led start-ups when it comes to more serious and large rounds of capital.

“In the start-up world, there is a biased view against women. They believe that they operate at the speed of a rocket and women with various personal responsibilities will not be able to cope and succeed at that speed. This view is obviously garnered by male-dominated start-ups. In most start-ups that have a female co-founder, you will find gender diversity to be very strong even at the senior or middle management level,” says Upasana Taku, Co-founder, MobiKwik. Taku is leading the fintech company’s IPO, which, if completed, will make MobiKwik the second woman-led tech company ever to hit the public market in India.

The first is, of course, Nykaa. Fifty-eight-year-old Falguni Nayar took her online beauty and personal care start-up to a blockbuster public market listing in November, becoming India’s richest self-made female billionaire in the process. Nykaa is among the five women-led start-up unicorns in India. That list includes the Good Glamm Group, the direct-to-consumer (D2C) beauty company that acquired POPxo and BabyChakra, and made Gill and Saggi co-founders.

“When we see more women scaling up, you’ll automatically see more women starting up,” adds Aishwarya Malhi, Co-founder of Rebalance, an early-stage accelerator for female founders that has facilitated over $10 million in venture capital (VC) funding for women-led companies so far. She says it’s time the investment community supported women entrepreneurs. “We all like to invest our time, resources and money in places that are, at some level, either testified or familiar. It’s natural, but this builds an unbreakable echo chamber of deal flow and founders over time. As VCs, we need to actively break that. Things turn around for founders when we put the right amount of faith, money and resources in their hands. Getting access to these shouldn’t be any harder for women entrepreneurs.”

And that starts with gender parity among the decisionmakers, adds Malhi. “Nine out of 10 decision-makers at VC firms are male, which can affect how a pitch/idea is received if the problem does not affect those in the room. On the other hand, improving diversity in venture capital is a matter of increasing access to wealth creation for women who have the expertise, experience and capital to be an investor. Less than 2 per cent of women invest as angels, while only 7 per cent of women are partners at VC firms.”

VC funds will have to adopt a gender lens to investing and this can be done effectively when there is better representation in senior management that evaluates deals and at partner levels that make investment decisions. Vani Kola, Managing Director, Kalaari Capital, explains why this is important. “Women investors are up to 3x more likely to fund women founders. When women venture capitalists are in positions of decision-making, they are actually twice as likely to invest in diverse, women-led founding teams or start-ups. We are seeing this number steadily on a rise, so that’s a step in the right direction.”

Madhu Shalini Iyer, Partner, Rocketship. vc, advocates for a dedicated fund allocation for women start-ups. “There’s a lot of support coming through for women investors globally. It’s time to put your money where your mouth is. A more effective way to solve this is to have a dedicated amount of capital for women founders. It’s a subjective topic, you have to have LP support. Once you start creating special allocations for women founders, all of the downstream and upstream problems get solved.”

This is already happening. Kalaari launched its CXXO programme in July this year, which gives women founders access to capital and mentorship. There is also Sequoia’s Spark Fellowship, which offers capital and mentorship to women in India and South-East Asia. Dedicated funds such as She Capital and Saha Fund are also trying to narrow the gap.

Ganesh, though, says change is needed at the roots. “We need to create social acceptance of women entrepreneurship,” she says. “Secondly, training women on various fronts and making them believe it is not as difficult as they might think. We need to create confidence in our young women. Thirdly, even women with great ideas tend to keep their ventures smaller because there is a confidence issue. To think ‘I can build something all India or global’ or ‘I can raise money, do marketing and sales’ requires a little bit of confidence and push.”

Luckily, self-confidence is something that Shah has in abundance. She ignored the unsolicited hiring advice that came her way. “I did hire a woman CFO and have proudly built a women-majority management team.”