EV sales in India to breach the 9 mn mark by 2027: IVCA-EY-IndusLaw report

The report says that the surge in EV sales can be attributed to factors such as the need for personal mobility, greater-than-before awareness of the environment and a spike in prices of petrol and diesel in the recent past.

As per the report, the Indian EV ecosystem is currently in the initial stages of development but has been gaining traction

India’s electric vehicle (EV) market is projected to witness sales to the tune of 9 million units mark per annum by the year 2027, says a report by Indian Venture and Alternate Capital Association (IVCA) in collaboration with EY and IndusLaw. The report titled ‘Electrifying Indian Mobility’ sheds light on the evolving dynamics of the country’s EV market, existing vehicular pollution levels that have powered the shift towards EVs, climate change,  the overall economic impact of EVs, state-wise registration figures, projected growth in the coming years et al.

As per the report, the Indian EV ecosystem is currently in the initial stages of development but has been gaining traction. In 2021,  330,00 units of EVs were registered in India, clocking a growth of 168 per cent as compared to 2020. This surge in sales was led by 2- and 3-wheelers, which accounted for 48 per cent and 47 per cent of the overall sales, respectively, followed by passenger vehicles at 4 per cent.  The e-rickshaw/e-kart category took the major share among three-wheelers with a share of close to 45 per cent, while e-buses had a minuscule share of 0.36 per cent.

The report says that the surge in EV sales can be attributed to factors such as the need for personal mobility, greater-than-before awareness of the environment and a spike in prices of petrol and diesel in the recent past. The second phase of Faster Adoption and Manufacturing of Hybrid and Electric vehicles (FAME II) has accelerated the adoption of electric 2-wheelers, which has witnessed close to 110,000 units in Q1 2022. 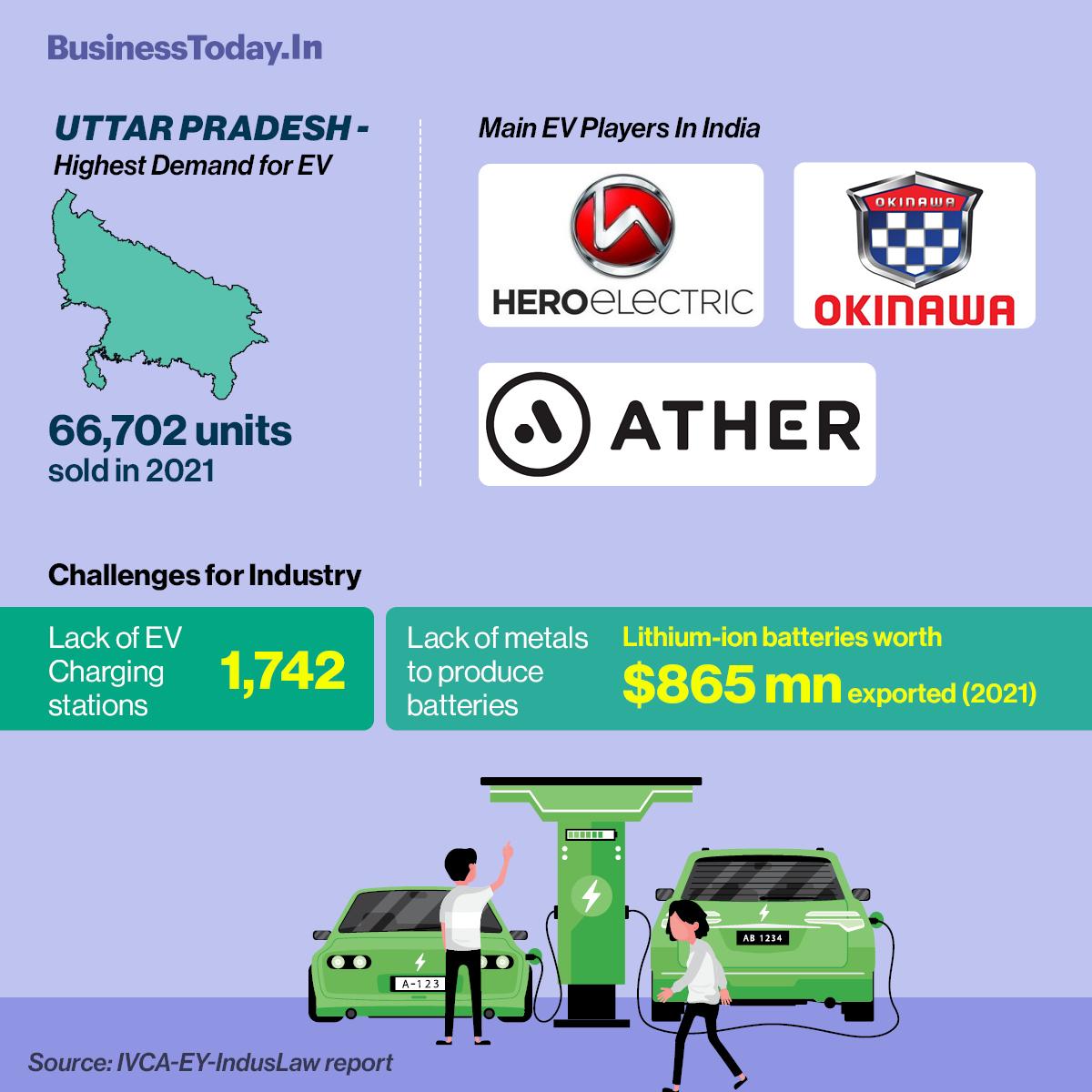 “As of CY21, electric vehicles accounted for 1.1 per cent of total vehicle sales and is expected to account for 39 per cent of total automotive sales by CY27 growing at a ~68 per cent CAGR over the next 5 years. The majority growth in EVs is expected to come from the travel segment, especially E3Ws and E2Ws due to fixed duty cycle and companies (E-commerce, groceries, shops) committing to going completely electric in their last mile deliveries,” the report stated.

One of the largest challenges that is ailing the sector and impeding its growth is the lack of charging infrastructure.
The report states that currently, there are only 1,742 charging stations in the country and the number is expected to increase to 100,000 units by 2027 to fulfil the demand put forth by 14 lakh million EVs that are anticipated to be running on the Indian roads by then. The EV industry has also managed to attract substantial investments and is expected to grow even further. In 2021, the EV industry saw investments to the tune of $6 billion and is expected to gain $20 billion by 2030. Private equity (PE) and venture capitalist (VC) investors too have ramped up their investments in this sector, which surged from $181 million to $1.718 billion clocking an annual growth rate of 849 per cent. (time frame not specified). As per the estimates put forth by the Ministry of Skill Development and Entrepreneurship, the EV industry can create 1 crore (10 million) direct jobs and 5 crore (50 million) indirect jobs by 2030.