The luxury four-seater coupe is powered by a twin-turbo V12 engine coupled with a eight-speed automatic ZF transmission.

Rolls-Royce General Manager for Emerging Markets-Asia Herfried Hasenoehrl at the launch of Wraith in New Delhi on Monday. PHOTO: PTI
IANS
Rolls-Royce, the super-luxury vehicle manufacturer, has launched its four-seater coupe Wraith in India with a starting price of Rs 4.6 crore.

The luxury four-seater coupe is powered by a twin-turbo V12 engine coupled with a eight-speed automatic ZF transmission. The engine is powerful enough to generate 624 brake horse power and 800 Nm of torque and can attain 0-100 km speed in 4.6 seconds.

According to the company, the new vehicle is the most powerful Rolls-Royce motor car ever made. 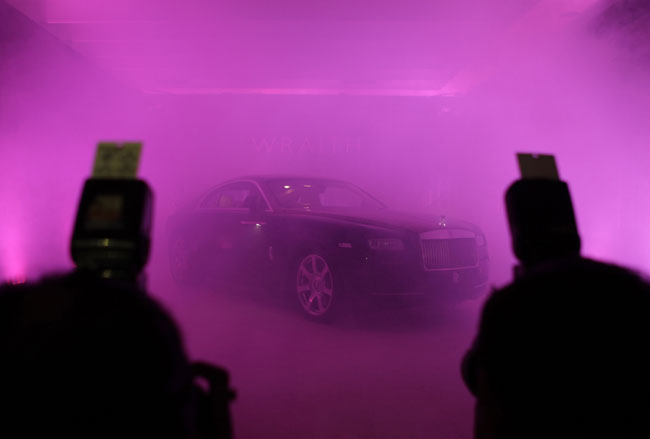 Media personnel take photographs of Rolls-Royce Wraith during its launch in New Delhi on August 19, 2013. PHOTO: AP
"Today we are proud to reveal the most dynamic and powerful Rolls-Royce ever built," said Herfried Hasenoehrl, general manager for emerging markets-Asia, Rolls-Royce Motor. "Rolls-Royce has enjoyed a great and lengthy history in India, and we're happy to greet our customers here with this exceptional new model." Rolls Royce Motor Cars General Manager of Emerging Markets, Asia, Herfried Hasenoehrl (left) and New Delhi Director Yadur Kapur pose with Rolls Royce Wraith during its launch in New Delhi. PHOTO: AP
According to the legendary British automotive manufacturer, India remains one of its best performing markets in Asia and that company expects sales momentum to continue in the country as there are a growing number of ultra-rich individuals in the untapped market South Asian market.

"We have seen an exceptional last year when we sold 3,575 vehicles (globally). This year we are confident of surpassing certain targets that the company has set. India continues to be one of the strongest markets and we expect the sales momentum to continue even this year," Hasenoehrl told IANS.

The 109-year-old carmaker, which returned to India in 2005, has been witnessing strong growth since 2010 and has plans of expanding its reach from the current base of three dealerships in Delhi, Mumbai and Hyderabad. The company plans to have two more dealerships at Chandigarh and Ahmedabad. 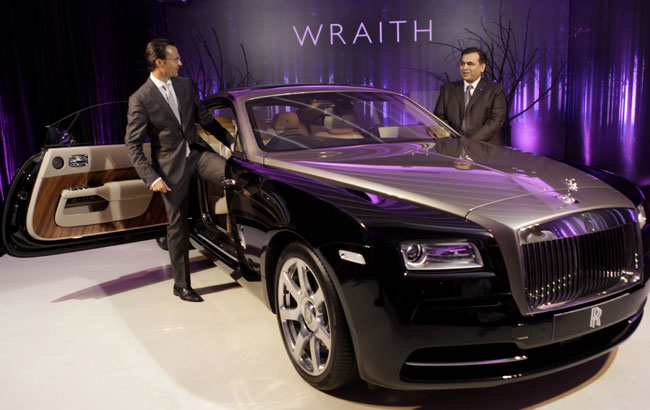