India administered 1,87,55,540 first doses of the vaccine in the first 17 days of March. At this rate, it will take 2.36 years for India to vaccinate 70 per cent of its population with the initial dose of the two-dose regime vaccination programme. 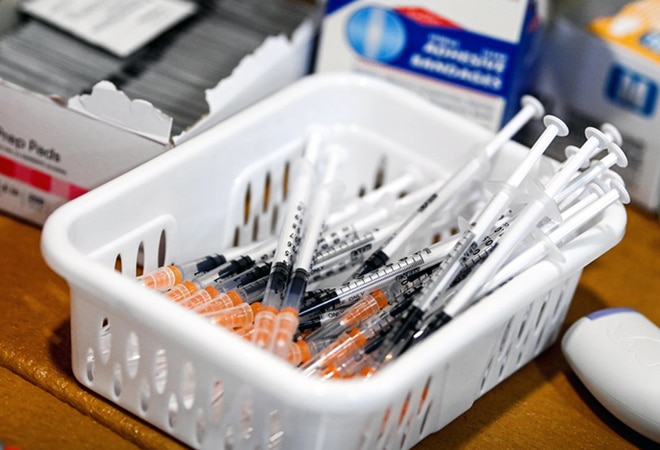 India, the second most populous country in the world, has administered the first dose of COVID-19 vaccine to 3.06 crore people till March 18, 2021. However, this figure represents only 2.3 per cent of India's 135.5 crore population. Full vaccination (both doses) has been given to only 0.5 per cent of the total population. At this rate, India will take 10.8 years to administer both doses to 70 per cent of its population to attain herd immunity. 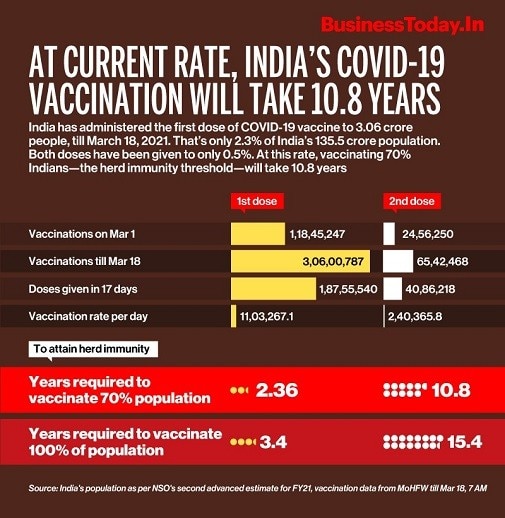 As per the vaccination data of Ministry of Health and Family Welfare (MoHFW), India administered 1,87,55,540 first doses of the vaccine in the first 17 days of March (from 7am on March 1 to 7am on March 18). This translates to an average of 11,03,267.1 first doses per day. At this rate, it will take 2.36 years for India to vaccinate 70 per cent of its population and 3.4 years to vaccinate the entire population with the initial dose of the two-dose regime vaccination programme.

However, the vaccination time period is even higher if data for administering second dose is considered. A total of 40,86,218 second doses were administered in the first 17 days of the month, an average of 2,40,365.8 doses per day. At this rate, it will take 10.8 years to vaccinate 70 per cent of India's population and 15.4 years to cover the entire population.

While there is no clear number for herd immunity, experts believe that vaccinating about 70 per cent of the population should be enough for developing herd immunity to break the transmission of coronavirus.

India began its COVID-19 vaccination programme on January 16, covering healthcare workers in the first phase. In early February, the vaccination programme was expanded to include frontline workers. In the ongoing second phase, which began on March 1, people aged above 60 years and those above 45 years of age with co-morbidities are being vaccinated.

Oxford University-AstraZeneca's Covishield vaccine, manufactured by Serum Institute of India, and Bharat Biotech's Covaxin are being used for the vaccination programme.

Drug firm Dr Reddy's application for emergency use authorisation (EUA) for Russia's Sputnik V vaccine is currently awaiting approval from the Drugs Controller General of India (DCGI). In September 2020, Dr Reddy's had partnered with the Russian Direct Investment Fund (RDIF) to conduct the clinical trials of Sputnik V, and for its distribution rights in India.

India currently has 2.52 lakh active COVID-19 cases, while 1.59 lakh people have lost their lives because of the disease. The number of cases has seen an upsurge in some states in the last few days.