A study by researchers at Harvard University in the US in September showed that an increase of only one microgram per cubic metre in PM 2.5 is associated with an 8 per cent increase in the COVID-19 death rate 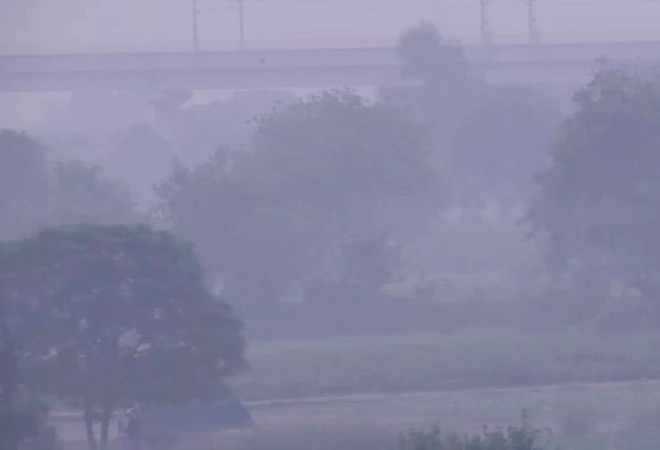 The level of small particulate matter (PM2.5) levels in Delhi have averaged around 180-340 ug/m3 in the past few weeks while that of bigger pollution particles (PM10) has hovered between 120 and 450 during the time

The causal link between air pollution and COVID-19 cases is yet to be established conclusively but long-term exposure will certainly make people more vulnerable to lung infections, warn scientists as the skies over large parts of north India, including Delhi, turn smoky and the air quality deteriorates rapidly.

Their concerns come amid several global studies pointing to the possible connection between higher air pollution levels and increased COVID-19 cases and deaths. A study by researchers at Harvard University in the US in September showed that an increase of only one microgram per cubic metre in PM 2.5 is associated with an 8 per cent increase in the COVID-19 death rate.

"Given the current limited literature, the surge of PM2.5 level in Delhi may be associated with increased COVID-19 cases... Although the literature is relatively sparse at this stage," Xiao Wu, corresponding author of the Harvard study, told PTI.

He said the relationship between long-term air pollution and COVID-19 has been documented in many studies, which indicate that adverse health impacts of air pollution can make people prone to the infection or exacerbate the severity of COVID-19 symptoms once infected.

This is interesting, especially considering COVID-19 causes viral pneumonia and acute respiratory distress syndrome, and severe inflammation to the heart and circulatory system, the scientist said. Another study by the University of Cambridge in April found an association between living in an area of England with high levels of air pollution and the severity of COVID-19, caused by the SARS-CoV-2 virus.

"Based on our findings, I would expect to see an association between higher levels of air pollution in India and COVID-19 in the winter, similar with what we found in England," said Marco Travaglio, corresponding author of the Cambridge study.

"If the levels of air pollution have been consistently above the legal limits for several months or years before this coming winter, I would expect to see a relationship between those levels and COVID-19 burden across different parts of India in November and thereafter," Travaglio told PTI.

The level of small particulate matter (PM2.5) levels in Delhi have averaged around 180-340 ug/m3 in the past few weeks while that of bigger pollution particles (PM10) has hovered between 120 and 450 during the time. Long-term exposure to chronically high PM2.5 levels weakens the ability of the lungs to fend off infections, therefore making people more susceptible to COVID-19, the scientists said.

In addition, studies from Italy have shown that traces of SARS-CoV-2 RNA, the genetic material of the virus, can be found on pollution particles, meaning that increased air pollution may act as a vehicle to increase COVID-19 transmission in highly polluted places. The air quality in north India is expected to deteriorate further from November to February due to several factors such as stubble burning, festive fireworks and low wind speed conditions which lead to an uptick in vehicular and industrial pollution being trapped in the lower atmosphere.

"In view of this evidence, high levels of PM2.5 in Delhi may lead to a higher number of COVID-19 cases," Travalgo added. Studies in humans have shown that toxic air particles can penetrate airways and cause widespread infiltration of lung cells. This chronic state of inflammation may induce or aggravate health conditions such as asthma, chronic obstructive pulmonary disease, cardiovascular diseases and diabetes, experts said.

Because these conditions have been widely found to be associated with increased risk of contracting COVID-19 or incurring into critical illness, it is likely that air pollution acts as a risk factor to increase the susceptibility to COVID-19. India has the world's second-highest caseload of over 7.9 million and the third-highest death toll with more than 115,000 from the novel coronavirus.

The National Centre for Disease Control (NCDC) has warned that Delhi is likely to report around 15,000 COVID-19 cases daily in winter because of the prevalence of respiratory illnesses during this season that worsen the symptoms of the disease. On Sunday, the national capital recorded 4,136 fresh COVID-19 cases, the highest single-day spike in 38 days.

D J Christopher, head of pulmonary medicine at the Christian Medical College in Tamil Nadu, noted that the increased severe form of COVID-19 among patients would lead to an increased ICU hospitalisations, thereby increasing the burden of the healthcare system. "Let us hope the numbers are not so high. There is a chance of hospital beds getting filled and shortage of ICU beds," Christopher told PTI.

Prof. Rajneesh Bhardwaj concurred, saying there is growing scientific evidence that airborne respiratory droplets carrying the virus travel and contaminate the air after an infected person coughs. Pollution may help this airborne droplet to remain suspended for a longer time and may increase the spread of COVID-19," Bhardwaj, associate professor at the Indian Institute of Technology-Bombay, told PTI.

According to pulmonologist Anurag Agarwal, however, the relation between air pollution and COVID-19 cases is very complex. While in general high air pollution increases risk of respiratory infections, it is difficult to say much more," Agarwal, director of the CSIR Institute of Genomics and Integrative Biology, told PTI.