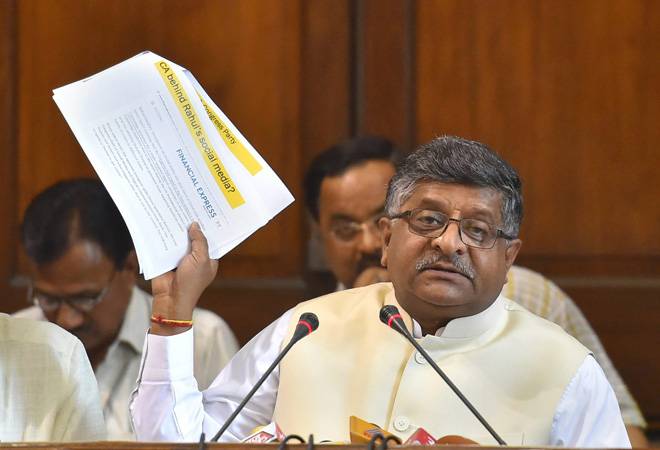 Information Technology Minister Ravi Shankar Prasasd opened fire against Congress on Wednesday for its alleged ties with Cambridge Analytica. The UK-based data mining firm has been in the eye of storm for manipulating US presidential elections in 2016 to help Donald Trump win.

"My question to Congress party is whether to win elections, Congress will depend on data manipulation and theft of data. What is the role of Cambridge Analytica in social media profile of Rahul Gandhi," Ravi Shankar Prasad said quoting reports while talking to reporters at the Parliament House complex.

Based on media reports, Prasad alleged that the company has been accused of using bribes, sex workers to entrap politicians and stealing data from Facebook. UK and British media reports suggest that Cambridge Analytica used data mined from Facebook in the voter research it conducted for President Donald Trump during the 2016 elections campaign.

As of now, the US Federal Trade Commission (FTC), an independent government body charged with insuring that companies abide by their own privacy policies, is looking at whether Facebook violated a 2011 consent decree after media reports alleged that it had handed the data of millions of users to a political consultancy.

"...let me make it very, very clear, we fully support freedom of press, speech and expression; we fully support free exchange of ideas on social media. But any attempt, covert or overt, by social media, including Facebook, of trying to influence India's electoral process through undesirable means will neither be appreciated nor be tolerated," Prasad said.

"Mr Mark Zuckerberg, you better note the observation of the IT Minister of India. We welcome the FB profile in India, but if any data theft of Indians is done through the collusion of FB system, it shall not be tolerated. We have got stringent power in the IT Act, we shall use it, including summoning you in India," Prasad warned.

On the question of whether the government would investigate data usage by Facebook, Prasad said that India had a regulator in the form of Telecom Regulatory Authority of India (TRAI), and in case of any specific complaints, the same would be taken under a structured investigation.

"We have got very robust mechanism available, we will look into it. But today, this very stern observation I gave that let my warning be heard across the Atlantic far away in California," he said.

Indian government and Facebook have had their tussles in the past. In 2016, TRAI had issued regulations on discriminatory pricing over internet access that had led to ban of platforms like Facebook's Free Basics.