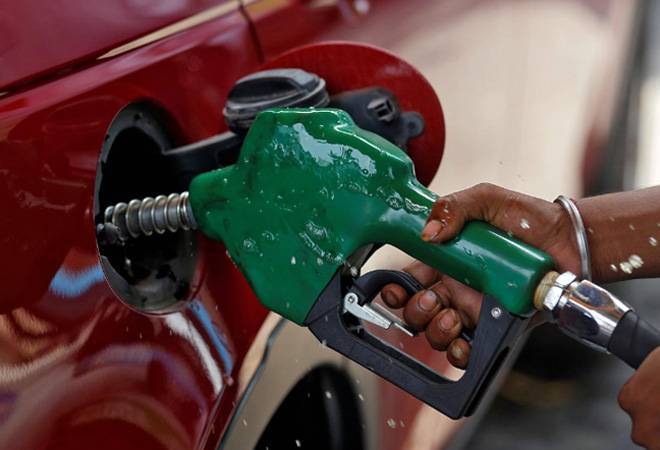 Diesel prices are at an all-time high; diesel is more expensive than petrol for the first time ever

After a record increase in prices of petrol and diesel over the last 18 days, the government on Wednesday said that the days of such steep hike in domestic prices of fuel are over.

The rate of increase, which is the highest for an 18-day period ever, is not exactly commensurate with the increase in prices of crude oil for the Indian basket in the international market. Since June 7, crude prices have gone up only by 6.5 per cent in dollar terms-from $40.75 per barrel to $43.41 per barrel. In rupee terms-which also takes into account currency fluctuation, the increase is again a relatively modest 6.9 per cent. 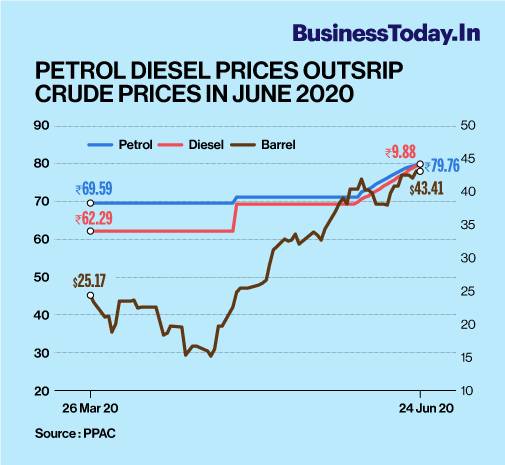 "The increase in domestic prices of petrol and diesel has happened with a lag in the last few months. But almost all of it has now been factored in. I do not foresee any significant spike in prices on a daily basis unless of course international prices turn very volatile," a senior official in the ministry of oil and gas told Business Today. "Crude prices had crashed to sub-$20 levels in mid April but have gone up to over $40 per barrel now. Prices have more than doubled. This spike in petrol diesel prices so far this month is only a reflection of that."

While fuel prices are revised on a daily basis in India, a practice that was adopted in 2017, the official said it was put on hold in March as the country went into a lockdown to combat the spread of the coronavirus pandemic.

"You can criticise us for not being transparent but please understand our logic. We did not wish to increase prices during the lockdown period as only essential services were allowed so it would have been an unnecessary burden on our corona warriors," he said. "Also, with so few vehicles on the road, it would not have served any purpose in terms of revenue generation either. So the revision of prices was deferred till the time unlocking of the economy begins, which started in the first week of June."

Crude prices have indeed fluctuated wildly in an uncertain global economy this year so far. Crude oil prices first crashed from $65.5 per barrel in December 2019 to just $16.19 per barrel on April 28, a fall of over 75 per cent before rising again to $43.41 per barrel today. Consumers have, however, not benefitted from the low prices as the government has increased taxes likes excise and VAT on numerous occasions to shore up revenues for the exchequer. However, prices have always been promptly been revised upwards whenever international crude prices have firmed up.

The last time, the government increased excise duty on fuel was in the middle of the lockdown on May 5 when duty on petrol was hiked by Rs 10 per litre and on diesel by Rs 13 per litre. It was the steepest ever hike in one go on petrol and diesel. Retail prices, however, were not revised as low crude prices meant oil marketing companies could easily absorb the hike. On the same day, the government of Delhi had hiked VAT on diesel by Rs 7.1 per litre and by Rs 1.6 per litre on petrol, which is a big reason for the near parity on prices of the two fuels in the national capital today.

Increase in cost of fuel has a debilitating effect on every part of the economy. The direct impact of this is being felt in the public transport and shared mobility business which are anyway struggling due to the pandemic.

"Fuel price hike for 18 consecutive days has created a pandemic of its own for commuters and public transport operators alike. These hikes are not sustainable and will have a debilitating effect on public transport sector which is already under severe duress due to policy apathy," says Prasanna Patwardhan, President Bus and car operators federation of India.  "Social distancing norms have slashed capacity by 50 per cent, so operators will now be forced to pass on the hike to passengers, sending ticket prices through the roof."

"It will have a cascading effect on overall health of the economy, especially at a time when there are job cuts and pay cuts, people may not be able to pay more for public transport.  This will also affect the school children and factory owners. We anticipate all of this will have a high impact on overall employment and economy. The government needs to step in and find a middle path so that both the operators and commuters can co-exist without undue financial burden on either."