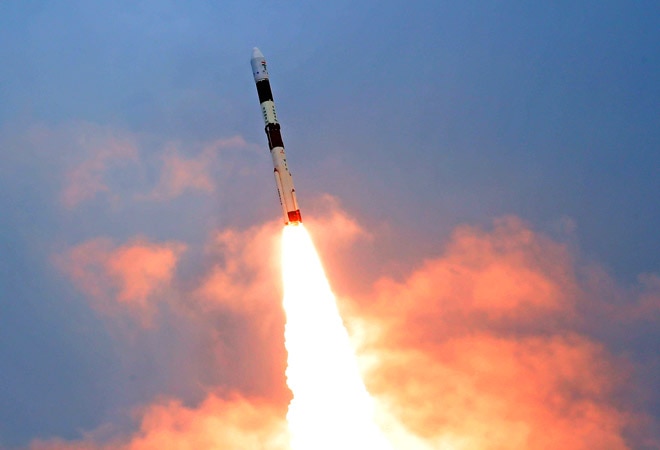 Indian Space Research Organisation (ISRO) has launched its earth observation satellite EOS-01 along with nine other customer satellites in its first mission this year. The satellites were carried by the space agency's trusted workhorse, Polar Satellite Launch Vehicle (PSLV-C49) which lifted off from the Satish Dhawan Space Centre (SDSC) in Sriharikota at 3:12 pm on Saturday. This was ISRO's first mission since the coronavirus outbreak.

The R2 satellite from Lithuania is for 'technology demonstration'. Four satellites from Luxembourg Kleos (KSM- 1A/1B/1C/1D) would be used for maritime applications. The other four satellites from the United States - Lemur (Lemur-1, 2, 3, 4) - are meant for multi-mission remote sensing purposes.

Personnel present at SDSC mission control centre took precautions in view of the COVID-19 pandemic. Scientists, mission directors and project directors wore face masks and maintained social distancing while overseeing the launch. There was no gathering of media persons and the public viewing gallery was closed too. Instead, ISRO arranged for live telecast of the launch through various platforms, including its website and social media sites.

ISRO Chairman K Sivan described the mission as a "success" and termed it as "unusual" for ISRO as a rocket launch cannot happen like 'work from home' and all engineers and technicians had to travel from different centres and work together at Sriharikota for rocket launches.

"Today, I am extremely happy to declare that PSLV-C49 successfully placed earth observation satellite EOS-01 as well as nine customer satellites precisely into 575 kms orbit," he said at the mission control centre.

The launch, originally scheduled for 3:02 pm, was delayed for 10 minutes as scientists "decided to put on hold following debris on the path of the rocket and inclement weather conditions" around 15 minutes before lift-off. The four stage 44.5-metre tall PSLV-C49, in its 51st flight, blasted off from the first launch pad at 3:12 pm after a 26-hour countdown.

All four stages performed as programmed, where the rocket first injected primary satellite EOS-01 into orbit around 15 minutes after lift-off, followed by the customer spacecraft.