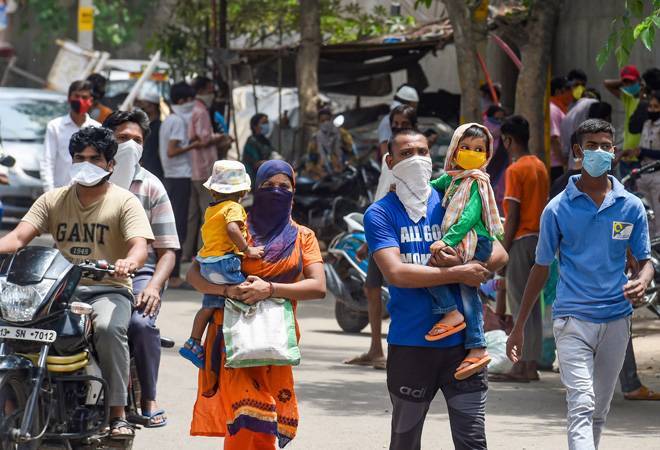 The Supreme Court on Tuesday took suo motu cognisance of the plight of migrant labourers stranded across the country amid coronavirus lockdown. The apex court said that there are lapses on the side of the Centre and the State governments and urgent measures are needed to address the problems of the migrant labourers, PTI reported. The matter has been listed by the Supreme Court for May 28. The top court has also asked Solicitor General Tushar Mehta to assist it on the issue, the report added.

The apex court further said, "They have also been complaining of not being provided food and water by the administration at places where they were stranded or in the way i.e. highways from which they proceeded on-foot, cycles or other modes of transport. In the present situation of lockdown in the entire country, this section of the society needs succor and help by the concerned governments, especially steps need to be taken by the government of India, state governments/Union Territories in this difficult situation to extend a helping hand to these migrant labourers."

Notice has been issued to the Centre, states and Union Territories by the bench of Justices Ashok Bhushan, Sanjay Kishan Kaul and M R Shah  and replies have been sought by May 28 on the measures taken to redeem the situation.

There were reports of many migrants being stranded in different parts of the country due to the suspension of transport services amid lockdown. Many were reported to have walked long distances to reach their villages from the urban centres of the country.

The nationwide lockdown in India, which started about a month ago, has impacted nearly 40 million internal migrants, the World Bank recently said in a report. The lockdown in India has impacted the livelihoods of a large proportion of the country's nearly 40 million internal migrants. Around 50,000 60,000 moved from urban centers to rural areas of origin in the span of a few days, the bank said in a report.

Meanwhile, the Uttar Pradesh government recently announced creation of a Migration Commission for employment of such labourers in the state and made it clear that any state that wants them from UP has to seek its permission. Over 23 lakh workers and migrants have returned to the state till last Sunday.

India's GDP to contract 6.8% in FY21 due to coronavirus lockdown: SBI report