The 2,000-page agreement was held up by deliberations pertaining to the access to waters for the purposes of fishing. Both sides quibbled over fishing rights as to whether fishermen from the EU will get access to British waters starting next year 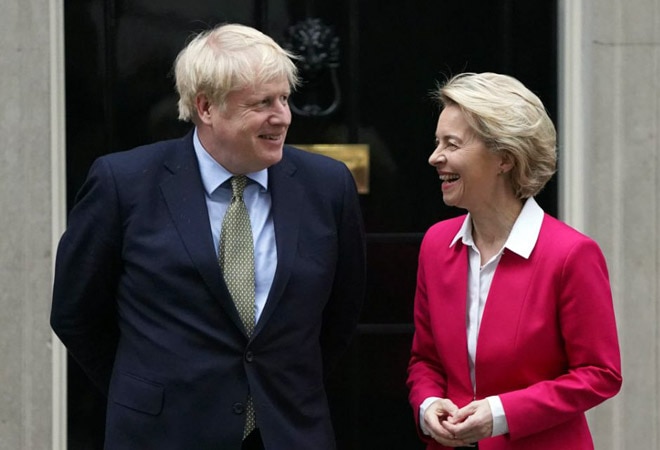 The United Kingdom finally struck a post-Brexit trade deal with the European Union on Thursday to mitigate the economic consequences incurred by the country post the departure from the single market earlier on January 31 this year.

The deal is done. pic.twitter.com/zzhvxOSeWz

"We have finally found an agreement," announced Ursula von der Leyen, president of the European Commission. "It was a long and winding road, but we have a good deal at the end of it," she added, saying that the single market will always remain fair.

Brexit - the withdrawal of the UK from the EU - was formally brought into effect on January 31, 2020. A controversial referendum, with about 52 per cent voting in favour of exiting the economic bloc, took place in 2016. The island nation became the first country to split from the union that was created in the aftermath of the second World War.

Having said that, the capital of England as well as the UK, shall remain bound by the EU's rules until the end of the transition period on December 31.

The 2,000-page agreement was held up by deliberations pertaining to the access to waters for the purposes of fishing. Both sides quibbled over fishing rights as to whether fishermen from the EU will get access to British waters starting next year.

The European Commission will now send the accord to the member states of the EU, who are expected to analyse the agreement and come out with a unanimous decision regarding its implementation. A vote on the deal will also take place in the UK parliament before December 31, warranting an interruption in the end-of-year festivities in the country. The signed-off text of the accord will enter the EU's official journal, indicating Britain's exit from the bloc's single market starting January 1, 2021.

The European Parliament will also have a provision to approve the deal later in 2021, EU officials said.

The referendum of 2016 had seen British voters choosing to leave the EU, with the claim of being able to win the "easiest trade deal in history". They argued that after aligning their businesses to the EU regulations decades on, the economies of both parties would still be a good fit for each other when separated. However, many in the EU were concerned about a powerful neighbouring rival adopting deregulation of its industries, thereby creating unfair competition for their firms.

Having said that, trading across the English Channel will have to be within the bounds of a new set of regulations and delays. Economists worldwide expect both - the EU's and the UK's disrupted supply chains to have taken a toll on their respective economies.

On the bright side, a trade deal removes the threat of tariff wars, with the relations between the former partners to be starting off on stable conditions.

In the negotiations between Von der Leyen, her chief negotiator Michel Barnier, and Britain's David Frost that lasted over 10 months, a technicality over fishing rights had stalled the agreement to the penultimate week of the year.

The UK aimed to reduce EU fishing fleets' share of the annual estimated business of 650 million euros by more than a third, with changes phased in over three years. Countries like France, Denmark, and the Netherlands in the EU on the other hand, insisted on 25 per cent over at least the next six years.

While the final details about the conclusion on fishing are not revealed, Barnier had informed ambassadors as well as the senior members of the European parliament (MEPs) on Tuesday about his final offer on the matter, leaving it up to the political leaders to make the decision.

This prompted a series of phone calls between PM Johnson and von der Leyen, concluding in the pre-Christmas negotiation.