In his speech, PM Narendra Modi said the friendship between India and Russia was not restricted to governmental interactions in capital cities, but was about people and close business relations 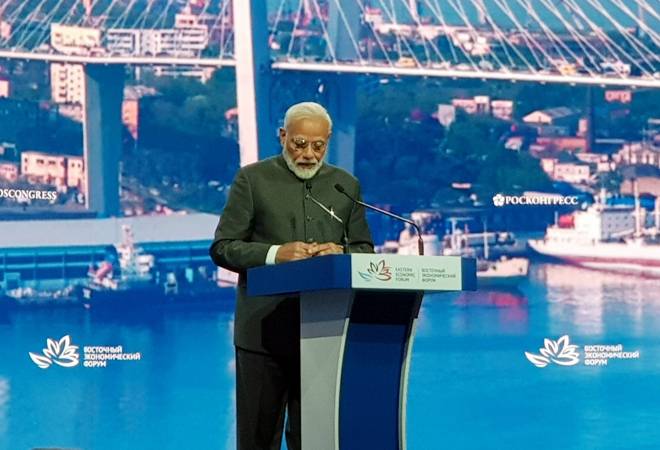 "India will give line of credit worth $1 billion to contribute to the development of Far East. This is the first time that we have extended line of credit to a specific region of a country. My government has actively engaged East Asia as part of its 'Act East' policy. And I firmly believe that today's announcement would be the take-off point for 'Act Far East'. This move will add a new dimension to the economic diplomacy of the two countries," Modi said at a packed house here.

In his speech, PM Modi said the friendship between India and Russia was not restricted to governmental interactions in capital cities, but was about people and close business relations.

"India's connection to Russia's Far East go back a long way. India was the first country to open a Consulate in Vladivostok. India has invested in the energy sector and other natural resources like diamonds here. The oil fields on Sakhalin are a great example of India's successful investment," he said.

Indian companies have invested more than $7 billion to acquire a stake in Russian oil and gas fields. India ventured into Russia when its flagship overseas firm ONGC Videsh (OVL) in 2001 acquired a 20 per cent stake in Sakhalin-1 oil and gas field in Far East Russia. OVL later bought Imperial Energy, which has fields in Siberia, as also stakes in Vankor oilfield in eastern Siberia.

Indian Oil Corporation (IOC) and its partners have picked up 29.9 per cent stake in a separate Taas-Yuryakh oilfield in East Siberia. In 2017, Russian oil firm Rosneft bought Essar Oil for $12.9 billion, which operates in Vadinar oil refinery in Gujarat and some 5,500 petrol pumps.

PM Modi also expressed hope that the efforts and investments of Indian diaspora would speed up the pace of development in the Far East region. "I invite all the 11 Governors of Far East to come to India to carry forward the best results of India's participation in the Eastern Economic Forum," he added.

In his address, PM Modi also emphasised on India's commitment to become a $5 trillion economy by 2024.

Modi is the first Indian prime minister to visit the Russian Far East Region. He arrived in Russia for a two-day visit to participate in the 20th India-Russia annual summit with President Putin and the fifth meeting of the Eastern Economic Forum (EEF).

The EEF focuses on the development of business and investment opportunities in the Russian Far East Region and presents enormous potential for developing close and mutually beneficial cooperation between India and Russia in the region.