By putting a cap of 20 kgs for check-in baggage, the airlines would make themselves unattractive for a family travelling with two kids, who would find it difficult to follow
Manu Kaushik

Even as the civil aviation ministry is close to taking a final call on when to allow the air travel in the country, new draft guidelines for airlines and passengers came out on Tuesday. While some of the rules outlined in the draft are clear - temperature checks, web check-ins, and declaration before flights - some are rather surprising. These include travel ban on people above 80 years, ban on cabin baggage, no compulsions on airlines to keep middle seats empty, and green signal on Aarogya Setu app.

The mandatory requirement of green signal on the Aarogya Setu app is particularly bewildering. Why? It essentially denies air travel to a vast population who don't own smartphones. As per market research firm techARC, India had 502.2 million smartphone users as of December 2019, which means that an estimated 42 per cent of the population use smartphones. There's nothing wrong in this approach but the question is why disallow people on the basis of their income levels (assuming that smartphone users are in a better position to afford air travel than non-smartphone users). It also goes against the current government's programme UDAN (Ude Desh Ka Aam Naargik) which is targeted to make the flying affordable for masses.

The other big issue that has emerged from these draft guidelines is that there's going to be a tough competition between railways and airlines for passengers. For years, airlines were giving a tough fight to railways by offering comparable fares, but things could change going forward.

By putting a cap of 20 kgs for check-in baggage, the airlines would make themselves unattractive for a family travelling with two kids, who would find it difficult to follow. Remember that people are going to travel far lesser (by public transport) in any case, and they would want to stay longer at one place which means that they would pack more stuff while travelling. On the other hand, there are no such restrictions on the train travel. 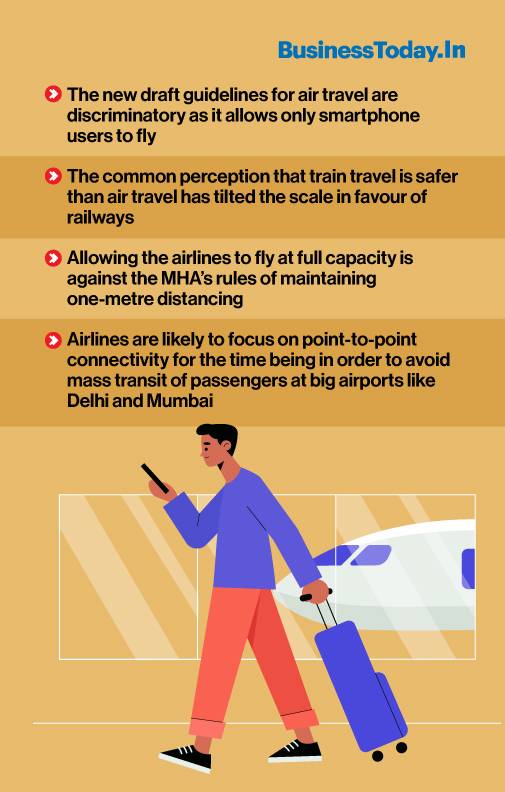 Nishant Pitti, CEO of online travel aggregator EaseMyTrip says that the airlines will have to fight a big misconception among travellers that train travel is safer than air travel when it comes to catching virus. "The value of time has gone for a toss. Even after the lockdown is lifted, people would not mind going into a Rajdhani to Mumbai because they are not in a hurry. During my conversations with airlines, they have said that aircraft are equipment with filters that clean the air but the general perception of the travellers is that trains are better because they provide for free-flow of air within cabins unlike the aircraft," he says.

As the safety compliance and costs for airlines are going to rise, they are partially relieved by the directive to fly planes at full capacity. Globally, debates are taking place on whether the airlines should keep the middle seats empty. Although this particular guideline flouts the government's directive of keeping one-metre distancing between individuals. But it seems that domestic carriers and even the aviation minister Hardeep Singh Puri are taking a line similar to the global aviation body IATA (International Air Transport Association).

"Besides, the ATF (aviation turbine fuel) prices have plunged to multi-year low. So when the services are resumed, airlines would have some breather. The airlines like IndiGo would also resort to point-to-point air connectivity (its initial strategy) as hub-and-spoke model would be discarded for the time being in order to avoid large gatherings at big airports like Delhi and Mumbai," says an aviation consultant. ATF prices have been cut by almost two-thirds since February to Rs 22,544.75 per kilolitre in Delhi, as per Indian Oil Corporation data. In the normal course, fuel is the largest cost item for airline contributing about 30 per cent to the overall costs.

Since March 25, when the first lockdown was enforced, scheduled flight services were discontinued on domestic and international routes. Barring cargo services to ferry essential supplies, and the recently-launched Vande Bharat Mission under which the government is bringing stranded citizens from 31 countries (in 149 flights) back to India, the commercial aviation has come to a halt.