Indian pharma firms on the road to discovering new antibiotics

The Indian drug firms have joined the global fight against antibiotic-resistant bacteria. The good news is that they are steadily moving ahead.

It is turning out to be a serious health scare. With bacteria fast developing resistance to existing antibiotics, we may soon reach a stage where a simple bruise may prove fatal. What is making things worse is that no new antibiotic has been discovered for bacteria that have developed resistance to some currently available antibiotics. This seems set to change.

In India, a bunch of bravehearts, knowing well that drug discovery is 'high risk, high reward' game, is doing extensive research to discover the next big antibiotic. They know that there are no clear timelines for drug discoveries. They know that the failure rate is high. But they are passionate about their work. If things go as planned, a new antibiotic for multidrug-resistant infections based on a made-in-India compound will hit the market by 2023.

"We have four programmes and hope to reach proof-of-concept in the target population by 2018. We could then, it not earlier, out-license the molecule to a global company for milestone payments and royalties as it takes it up for further development," says Radha Rangarajan, the CEO and co-founder of the Hyderabad-based Vitas Pharma. Such out-licensing is a common practice in the pharmaceutical industry, as further development of a molecule, till the time it hits the market, is a very costly affair. The risk of failure, too, is high.

The nine-member Vitas is working on developing the next-generation antibiotic for multidrug-resistant infections. These infections kill lakhs of people globally. The problem - a result of misuse of antibiotics - is so acute that even simple infections that were easily treatable in the past are becoming life-threatening (See Antibiotics: A Short History).

Vitas has got seed funding from the Indian Angel Network and two grants from the Biotechnology Industrial Research Assistance Council. It also has a research collaboration with Biocon. The drug is at the toxicology study stage (in which scientists look at the adverse effects in living organisms), though Rangarajan is hopeful that next year the company will be able to file for an IND (investigational new drug) application with the US Food and Drug Administration (USFDA), which could give the product QIDP status. QIDP, or Qualified Infectious Disease Product, is a fast-track approval programme of the USFDA for new antibiotics. "Radha and her team have been working a lot in this space. I extended my support as it is important for India to do something in this area," says Biocon Chairperson and Managing Director Kiran Mazumdar-Shaw. 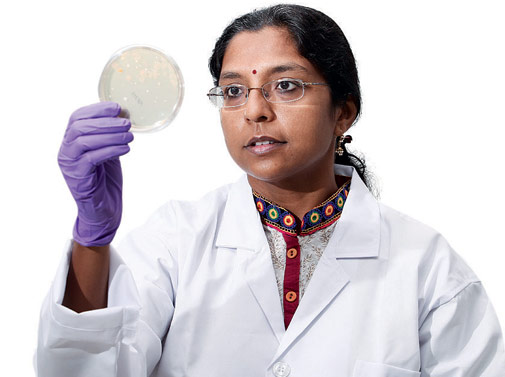 'We have four programmes and hope to reach the proof-ofconcept in humans in three years', says Radha Rangarajan, CEO, Vitas Pharma
In Bangalore, Shaw's home town, a 15-people team of Bugworks has been working on drug-resistant and hospital-acquired infections since January 2014. "Our product is at an early stage but the results look exciting, though we are still some time away before we can say that we have a strong chemical compound," says CEO Anand Anandkumar. "By 2019, we hope to reach the stage of early proof-of-concept in humans," he says. He says they are also working on bio films, a chemical for coating biomedical devices so that these do not catch infections and spread them on to patients.

There is no fixed timeline for approval as it depends upon the product and the USFDA policy for the therapy segment it belongs to. Though the average time taken for drug discovery is 10 years (See It's a Long Road), in case of new antibiotics, after Phase II, it could take three to five years (three for clinical development and two for approvals), as are under the QIDP programme.

What makes these developments important is that almost no big cash-rich Indian pharmaceutical company is investing in basic research in this field. "It is difficult for generic companies, with 24 per cent EBITDA margins, unlike the 40-50 per cent margins that innovator companies earn. On top of that, the government wants to impose price control," says a senior executive at a leading pharmaceutical company. Even worldwide, few companies are working on antibiotics, as they are not as profitable as, say, drugs for cancer and diabetes. This is because a course of antibiotics lasts just five days while medicines for diabetes and hypertension have to be usually consumed for life and, therefore, turn in more profits. The total global market for antibiotics is estimated to be worth $40 billion.

This is not to say that Indian pharmaceutical companies are not doing basic research or have given up on new drug discovery. For instance, Sun Pharma Advanced Research Company is working in oncology, ophthalmology, dermatology and respiratory segments. It is working on new drug delivery systems and two new chemical entities (molecules), Sun k706 (for leukaemia) and Sun 597 (for dermatology). Both are at the pre-clinical stage. Glenmark, which has always seen itself as a drug discoverer, is doing research in pain, inflammation and oncology segments. Among the leading Indian companies, Wockhardt is arguably the only one focusing on the antibiotic space, where it has three compounds. In May this year, it said the USFDA had granted WCK 4873, from its new drug discovery programme, QIDP status. This is the third product from Wockhardt to get this status. 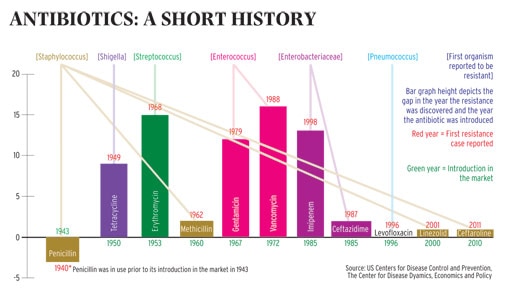 "There is a need for mission-oriented research in antibiotics with stronger commitment from the pharmaceutical sector. A starting point could be making this a national priority, with the government partnering with some cash-rich pharmaceutical companies," says K.V. Subramaniam, President, Reliance Life Sciences. On why Reliance Life is not working in this field, he says, "We are focused on biological research. If there are opportunities from a biological standpoint, we will certainly look at them." Reliance Life Sciences is developing novel therapeutics for treatment of cancer, inflammation, and cardiac and neurology disorders.

Globally, though, there are signs of renewal of interest in antibiotics, with drug majors such as Merck and Roche re-entering the space. For instance, last September, the USFDA granted QIDP status to Merck's Relebactam, which is for treating complicated urinary tract infections.

Among the bigger Indian players, Dr. Reddy's, where Vitas' Rangarajan used to work earlier, is also looking at the field through Aurigene, an independent subsidiary based in Bangalore. Aurigene, which offers drug discovery services to global companies, has in its pipeline products that boost the immune system, which is one of the ways of fighting drug resistance. These are at the pre-clinical stage. The company is working on two anti-infective assets. Aurigene CEO C.S.N. Murthy says the company is doing this work on its own and hopes to get to the stage of early proof-of-concept in human in two years. It will then take a call whether to out-license it or develop it further on its own. 'There is a need for mission-oriented research with stronger commitment from the pharma sector', says K.V. Subramaniam, President, Reliance Life Sciences
Then there is Cadila Pharma-ceuticals, which has tied up with the UK-based Helperby Therapeutics. "Big Pharma has all but left the playing field in favour of more lucrative treatments for long-term conditions and it has been left to fledgling drug discovery companies such as Helperby to try to fill the void," Professor Sir Anthony Coates, Chief Scientific Officer, Helperby, had said in July 2014. Helperby "has discovered the world's first antibiotic resistance breaker, which is currently in development under license by Cadila Pharmaceuticals," he said. An antibiotic resistance breaker is combined with an obsolete antibiotic to rejuvenate it and make it active against highly-resistant bacteria. Cadila is taking the compound through further clinical trials.

The money, too, is flowing in, though it may not be enough. "We have raised $750,000 through angel funding and are in talks with venture capital firms and a large pharmaceutical company to raise a million dollars. The $1 million should get us to the animal proof-of-concept stage. After that, we will need another $5 million to take our assets to the human proof-of-concept stage," says Anandkumar of Bugworks. "We have three assets that look interesting, though we can put money in any one at a given point in time," he says. He adds that a lot of companies are also looking even at a pre-clinical licensing deal due to the growing threat of superbugs, strains of bacteria that have become resistant to antibiotic drugs.

Even the government is pitching in. Anandkumar says they have received two grants from the Department of Biotechnology with a total ticket size of Rs 90 lakh, or $150,000, over a two-year period. However, this is much less than what is needed. According to a study by the Tufts Center for the Study of Drug Development, the discovery of a new drug is estimated to cost $2.6 billion. But those working in this field say it is not that high. "Since the failure rate is more than 93 per cent, companies load costs of all failures against one success. But I still think you need $500 million from inception to the time the drug is fully out in society," says Anandkumar. Rangarajan of Vitas Pharma says "the cost of early clinical development varies depending on whether it is a big pharmaceutical company or a small biotech player. For antibacterials, this work can be done for less than $10 million depending on where the trials are conducted, the infections chosen and the time taken for regulatory approvals."

No matter what the costs are, it is important for humanitys survival that these companies succeed.