The court in a notification said the hearing has been cancelled due to the non-availability of Justice Aniruddha Bose. Justice Bose and Justice N Rao are in the bench hearing the case

The Supreme Court (SC) will not pronounce its verdict on modification appeals by telcos as the bench comprising Justice Anniruddha Bose and Justice N Rao stands cancelled
BusinessToday.In

What happened today? Actually, nothing...

The Supreme Court (SC) will not announce its verdict on the AGR case today. The court in a notification said the hearing has been cancelled due to the non-availability of Justice Aniruddha Bose. Justice Bose and Justice N Rao are in the bench hearing the case.

This is what the court said...

"Take notice that due to non-availability of …Justice, Aniruddha Bose on Thursday, the 22nd July, 2021, sitting of court number 6 comprising of …Justice Nageswara Rao and Aniruddha Bose stands cancelled and matters listed before this bench on 22. 07.2021 Thursday will not be taken up for hearing," stated the apex court in a notification.

But something did happen at the court few days ago!

The SC had on Monday, July 19, said it would pass the orders on applications filed by telecom majors-Vodafone Idea, Bharti Airtel and Tata Tele Services Ltd- on July 22. The telcos, in their pleas, raised the issue of alleged errors in calculation in the figure of adjusted gross revenue (AGR)-related dues

Oh no, is there an error?

The top court in September last year had given 10-year time to telecom service providers struggling to pay their outstanding AGR dues to the government. During the hearing on Monday, a bench headed by Justice L.N. Rao referred to the earlier order passed by the apex court in the matter and observed that they said no re-assessment of AGR-related dues can be done.

However, the firms submitted that arithmetical errors can be rectified and there are cases of duplication of entries.
Senior advocate Mukul Rohatgi, appearing for Vodafone Idea, said they were not blaming the Department of Telecommunications (DoT) for it as there are arithmetical entries. He said they want to place the entries before the department so that they can re-consider it.

The bench also observed that the top court had earlier said there can't be any re-assessment. 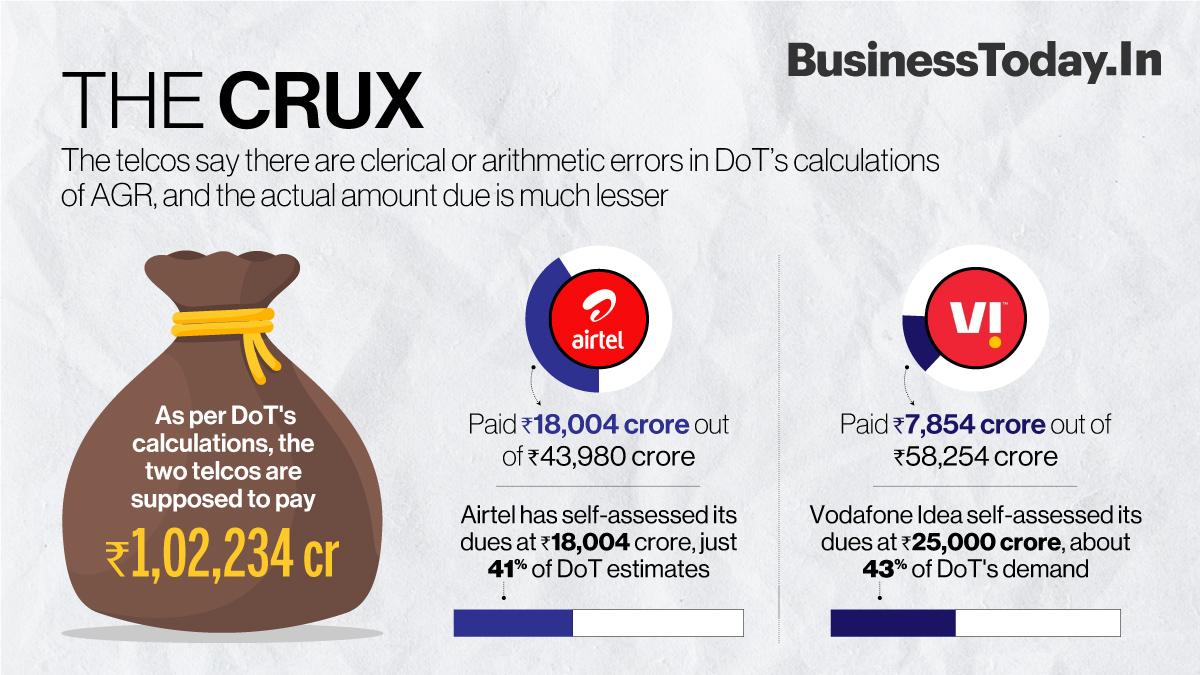 But they can be fixed

Rohatgi said figures are "not cast in stone" and several tribunals don't have the power of review, but they do have the power to correct arithmetical errors. "Allow me to place these entries before DoT and let them take a call on this," he said, making it clear that they were not seeking any extension of time.

Senior advocate A.M. Singhvi, appearing for Airtel, said there are cases of duplication and also of payments made but not accounted for.

He said these issues should be considered by the DoT.

It was only looking at the bar on re-assessment which was imposed by earlier orders.  The bench then asked solicitor general Tushar Mehta, who was appearing for the DoT, about the issue raised by these telecos.

After hearing the submissions, the bench said it would pass order on the issue.

The top court said some other applications, including those raising the question whether airwaves or spectrum can be transferred or sold by telcos as part of their assets, would be heard after two weeks.