'Jobs - Reality Check': Not just Modi! Any government will struggle to create jobs in future

This story is a part of BusinessToday.In series on unemployment titled 'Jobs - Reality Check'. Absence of reliable data has made unemployment a highly debated topic this election season. The series will try and answer some of the most prevalent questions related to the jobs scene in the country.

The multiple claims, and counter-claims on job creation numbers make for a fascinating read.

In July 2018, Prime Minister Narendra Modi told Parliament that nearly a crore or 10 million jobs were generated in a year if both formal and informal sectors were taken into account.  Citing a study from an "independent institute", he stitched the new enrolment numbers from the Employee Provident Fund and the National Pension Scheme while also factoring in the number of new professionals such as chartered accountants and doctors joining the system to calculate formal jobs. Professionals, when they start their own practice, create jobs. For informal job creation, commercial and passenger vehicles sold were cited as a proxy - vehicles need drivers and helpers.

The counter claim to this estimation: the 10 million number, considering it is accurate, don't say whether they are net new jobs. Higher Provident Fund and Pension Scheme numbers could be reflective of higher formalisation of the economy. Instead of new jobs, those working in the informal sector may have simply switched over. Government databases have overlaps too. Also, those driving new commercial vehicles may have either changed jobs or switched over from driving older vehicles.

Meanwhile, over the last three years, in the absence of timely publicly released, survey-based employment-unemployment numbers from the government, a private effort gained currency. The Centre for Monitoring Indian Economy (CMIE), which maintains business and economic databases, conducts an unemployment survey with a sample size of over 178,000 households. The company's survey indicates that in calendar year 2018, the number of people employed had shrunk by nearly 10 million. In December 2017, about 406 million were employed; that number was 396 million by December 2018. The unemployment rate, in February 2019, is estimated at 7.23 per cent, higher than the 5.87 per cent in the year-ago month. Unemployment, in February 2018, was the highest in Tripura (26.1 per cent), followed by Haryana (21.3 per cent) and Jammu and Kashmir (17.3 per cent). Unemployment was the lowest in Puducherry (0.9 per cent), Tamil Nadu (1.4 per cent), and Karnataka (2.1 per cent).

The numbers point to an economy under stress. And it is not going to get any easier, going ahead. The difficulty of the Modi Government to generate enough jobs is partly because of few things beyond its control. It took over at a very difficult time - the demographic pressure, of more than a million people joining the workforce every month, has coincided with two mega trends sweeping the world. The pressure to create jobs with decent wages have also been crippled by historical neglects, by all governments of the past, in primary, vocational, and higher education as well as healthcare.

Here are the demographic numbers: The World Bank's South Asia Economic Focus Spring 2018 report stated that between 2015 and 2025, India's working age population or those above the age of 15, is expanding by 1.3 million a month. India, therefore, needs to create millions of jobs a year.  How many millions depends on the estimates of the employment rate. Not everyone in the working age population works. The World Bank calculates the share of the working-age population that is at work at 50 per cent. India, the report stated, would need to create more than eight million jobs a year to maintain the same level of employment rate, going ahead.

That's a difficult number to sustain every year for any government even when the country's economy expands fast. Growth creates fewer jobs than it used to. Azim Premji University's State of Working India report states that a 10 per cent rise in GDP now results in less than one per cent increase in employment. In the 1970s and 80s, when GDP growth was around three-four per cent, employment grew at two per cent an annum.

One of the reasons for this divergence is the mega trend of automation driven by newer technologies. This is the reason why all future governments would struggle to show good jobs numbers in either manufacturing or services. Companies are building smart factories that require one-fourth or less of the manpower needed even five years ago. 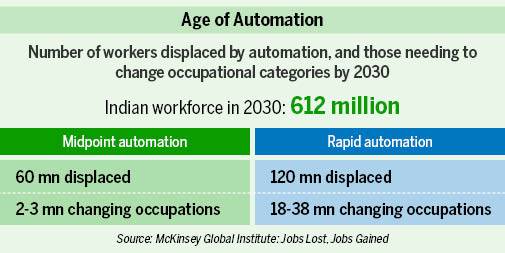 By the time Modi became Prime Minister in 2014, the world had started adopting Industry 4.0, the new industrial revolution enabled by smart sensors, automation devices, new generation of robots, Internet of Things (IoT), cloud computing, location detection technologies, human-machine interfaces, augmented realty, 3D printing, artificial intelligence (AI), big data analytics, and mobile devices among others. Indian manufacturers are adopting smarter manufacturing to close the productivity gap with other countries - India's labour productivity, compared to world standards, is low with one manufacturer of automobile stating that India was 10-15 per cent lower compared to countries such as Japan, Korea, and the US. Meanwhile, the cost of hardware is falling too. New generation of robots, such as cobots, are cheaper than traditional robots, have higher reliability and thereby need less people to maintain. Manufacturing, in short, would simply struggle to absorb the migration of workers from the less remunerative farm sector.

In services, Artificial Intelligence-driven bots are reducing the number of employees needed for information technology and call centre jobs. Home automation is the next frontier where a range of today's blue collar jobs could potentially be wiped away.  The McKinsey Global Institute, in December 2017, came out with a report titled 'Jobs lost, Jobs gained: Workforce transitions in a time of automation'. The report plotted different scenarios - slowest, midpoint or fastest - on the impact of countries adopting automation. The Institute stated that nine per cent of India's current work activity hours can be automated by 2030 in the midpoint scenario, and up to 19 per cent in the rapid scenario. By 2030, India's workforce will total 612 million and in the rapid automation scenario, about 120 million workers will be displaced.

Lower labour productivity traces back to poor vocational education, and also healthcare. Work in older generation factories was robotic and standing for eight hours, baring two breaks, required physical endurance. Smarter factories require more cognitive skills but very few of India's blue-collar workforce may be able to up-skill. According to the National Family Health Survey, in India, about 38 per cent of children under age five years are stunted (too short for their age), about 21 per cent of children are wasted (too thin for their height) while 36 per cent are underweight. Among other reasons, stunting can happen when an undernourished woman delivers a child. It leads to poor development of the frontal lobe in the neocortex, which impairs learning, judgement, planning, decision-making and being able to see the big picture. One of the micro trends in manufacturing, at least in the organised sector, will be the shrinking of the blue collar segment since Industry 4.0 jobs comes with a higher skills bias. When loading and unloading work in a factory is done by robots, for instance, the worker may be expected to programme the robot or maintain it. This work borders on the white-collar. Workers who are unable to up-skill will be rendered useless.

The second mega trend is anti-globalisation. The book, Jobonomics, states that between 2004 and 2011, global trade was growing almost double the rate of global GDP growth of about 3.5 per cent. In other words, economies were far more open. Trade growth tanked in 2009, after the recession, but recovered for a couple years. However, since 2012, global trade slipped and is growing slower than global GDP growth. 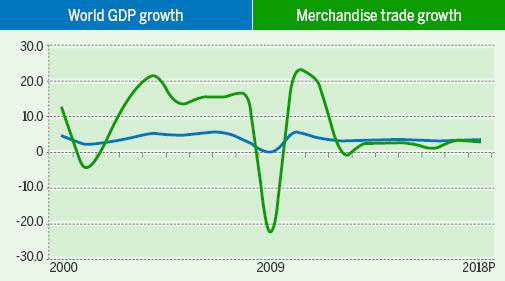 The book also quotes Sunil Kumar Sinha, Director of Public Finance and Principal Economist at India Ratings and Research: "Global GDP is back to over three per cent growth rates after the recession, but trade has fallen below three per cent (in most of the years). The fiscal and monetary policies that different countries pursued, by and large, have been able to put their economies back on track. But this has not been accompanied by a similar growth in trade as was witnessed during 2004-2011. Countries are not willing to trade."

If the last five years were difficult, the next 10 would be equally challenging for jobs generation. This would be a period of adjustment, and pain. And one that would determine whether India made use of its demographic dividend, or created a nightmare.