In the past few months, several phone sellers have announced that they want to make handsets in India instead of sourcing from China.

A Lava International assembling facility in Noida: The company has invested Rs 50 crore to set up the factory with a capacity of one million a month (Photo: Vivan Mehra)
Goutam Das

Sunil Vachani's one-line profile on LinkedIn fails to reflect his entrepreneurial fervour, now more than two decades old. After all, the 'CMD at Dixon Technologies (I) Pvt. Ltd.' - as the profile reads - was one of the earliest in India to start an electronic manufacturing services company, making TVs, set-top boxes, DVD players, washing machines and induction cookers for top multinationals such as LG Electronics, Philips, Panasonic and Toshiba. Working through the rough-and-tumble of India's manufacturing landscape, it touched Rs 1,200 crore in revenue in 2014/15.

Vachani, ever vigilant to new opportunities, started thinking about building an Indian multinational in the next 10 years, riding the country's ambition to become the factory of the world. Indian manpower, given the right environment, would be more productive than the Chinese, he told himself.

Then came March 2015. Three Chinese phone makers selling products in India approached him, one after another. Will he start a phone manufacturing plant?

Vachani jumped at the thought. Dixon is now setting up a handset factory in Noida with an initial investment of Rs 25 crore. The plant, with a capacity to make 700,000 units a month, will start humming in August. "An anchor client will make two models out of the plant," says Vachani.

Dixon is not a one-off case. In the past few months, several phone sellers have announced that they want to make handsets in India instead of sourcing from China. Some have already started doing so while some, who were producing in limited quantities, have started scaling up.

For instance, Samsung, the country's largest phone seller, has been manufacturing in India since 2006. This year, it has spent more than Rs 500 crore to add capacity at its plant in Noida where it makes many models, including the Tizen-powered Z1, Galaxy S6 and S6 Edge. Micromax, India's second-largest phone maker, has started a plant at Rudrapur in Uttarakhand and is planning investments in Telangana, Rajasthan and Maharashtra. Lava has so far invested Rs 50 crore to build a facility in Noida to assemble one million units a month. The plant employs 400 people and assembles two models - X8 and Xolo. A second unit, with an investment of Rs 1,200 crore and a capacity of 10 million units a month, is on the drawing board. Celkon Mobiles has a 30,000 sq ft. plant in Hyderabad with a capacity to build 3,500 phones a day.

Similarly, Spice Mobility is investing Rs 500 crore in Noida to build a facility it says will be up and running by the next quarter. Karbonn is investing Rs 200 crore in two plants, in Noida and Bangalore. "We will start production this month (June 2015). Overall, 10 lines will be up and running, which means a combined capacity of 40,000 units in one shift a day," says Karbonn Chairman Sudhir Hasija.

Tom Lu, the CEO of another Chinese handset maker, OPPO Mobiles, says the company will soon announce plans to make in India. And the big daddy of electronics manufacturing, Taiwan's Foxconn, is planning to build no less than seven-eight units, say sources. It did not respond to a clarification sought by Business Today. 'An anchor client [at the Noida factory] will make two models out of the plant,' says SUNIL VACHANI, CMD, Dixon Technologies. (Photo: Shekhar Ghosh)
Recently, some media reports suggested that the company could make Apple's smartphones in the country. But sources told BT the deal has not been closed yet as Foxconn is still evaluating the idea and talking to different states for benefits.

Remember that these companies will assemble, not manufacture - the distinction is often lost in the noise over 'Make in India'. True manufacturing entails making components such as processors, cameras and touch screens as well. One can call it low-end work with little value addition but that is how most manufacturing ecosystems start.

Still, the larger point is that a second start is being made. The earlier one had come to an end with Nokia's plant at Sriperumbudur in Tamil Nadu. At its peak, the plant, Nokia's jewel in the crown, was the world's largest, producing more than 15 million units a month. It exported to 72 countries. Then came two tax disputes, with total claims of Rs 17,658 crore. Slowly, the company shifted production to Vietnam. When Nokia sold its 'Devices and Services' business to Microsoft in September 2013, the tax authorities froze the plant, preventing a transfer. The plant closed in November 2014.

The closure of the Nokia plant means a lot of capacity is lying idle. India today has a capacity to assemble 270 million phones a year, according to data from the Indian Cellular Association. The figure for China is 1.1 billion. Because of economies of scale, and the presence of a fullfledged ecosystem, production cost in China is the lowest in the world. The question, therefore, is - why should anyone make in India, especially when there are too many gaps in the country's ecosystem? For one, there is no component base here. This means high freight costs. And the cost of finance, power and water - key to electronic manufacturing - is lower in many other Asian countries.

In 2011, KPMG compared India and China's competitiveness in handset manufacturing. The landed cost of materials, it assumed, would be 10 per cent lower for the Chinese. While an Indian manufacturer would have to import 80 per cent components, the figure for a Chinese company would be only five per cent. Chinese labour, according to KPMG, was 1.8 times more productive. Power costs were 20 to 30 per cent lower while water was 30 to 35 per cent cheaper in China. These ensured that a mid-sized Chinese manufacturer with a capacity to make 20 million units a year would have a profit margin of nine per cent. For the Indian company, the figure would be 2.6 per cent.

However, since 2011, rising labour costs and currency movements may have eroded some of China's advantages. "In the past three to four years, labour costs in China have risen 20 per cent," says Alekh Tiwari, Associate Director, Management Consulting, KPMG. The rupee has weakened while the yuan has strengthened against the dollar. A weak currency aids exports. "China's competitiveness has been hit and handset manufacturers are struggling to maintain margins. Many companies from developed countries are looking at shifting production to Southeast Asia and India," he says.

On China's east coast, starting salaries in the mobile manufacturing industry are equivalent to Rs 25,000 a month. In India, they are Rs 7,000 to Rs 8,000. Availability of manpower is also an issue. There are not enough people in China willing to do manual low-paying jobs as the country has moved up the value chain. "When an economy grows, there are enough opportunities. Nobody wants to work as a labourer," says Hari Om Rai, Chairman and Managing Director, Lava International. "I can see that manufacturing will shift out of China. India has huge human capital."

India, too, is taking to smartphones, but has a long way to go. According to IDC, a market research firm, smartphones accounted for 35 per cent mobile business in the fourth quarter of 2014, up from 13 per cent in the same quarter a year ago. The country, therefore, has an opportunity to move into the entry-level market, just like in automobiles. Modi thinks India has an opportunity to lead in $50 (Rs 3,000) smartphones. "The cost of components is falling. China has seen the emergence of chipset companies. They have significantly brought down the cost of 3G chipsets. You can now give someone a 3G smartphone for less than Rs 3,000," he says.

It is fashionable to talk about a "China+1" de-risking strategy. Can India become an alternative? Sanjay Kapoor, Chairman, Micromax Informatics, believes so. "I think one of the most important ingredients for making manufacturing viable is domestic demand. India is a large market. If the world has to choose an alternative and have a de-risking strategy, India will be the most potent destination," he says. 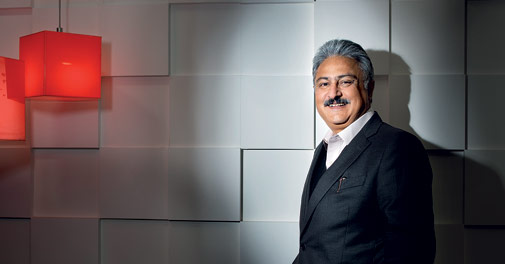 'If the world has to choose an alternative, India will be the most potent destination,' says SANJAY KAPOOR, Chairman, Micromax. (Photo: Vivan Mehra)
Under the government's 'Make in India' campaign, phone sellers were nudged to go for local manufacturing. Micromax saw it coming before anyone else. Early in 2014, Vikas Jain, co-founder of Micromax, told BT the move to start making phones in India was aimed at managing risks. "As we talk of our huge trade deficit with China, we foresee that in times to come there could be some trade embargo or anti-dumping duty. We thought it would be prudent to have local manufacturing," he had said.

When we ask Spice Mobility's Modi whether the companies were coerced to make in India, he responds: "Coercion is a very strong word. There is encouragement."

The 2015/16 Budget had an 11 per cent excise duty differential between local and imported phones. This was a step up from the earlier figure of five per cent, designed to create a pull for local manufacturing. But a recent Supreme Court order, in a case related to SRF and ITC, implies that if there is no duty on domestic goods, there can't be a countervailing duty (CVD) on imports either. In an order dated March 26, the court held that SRF and ITC were entitled to exemption from payment of CVD. SRF, for instance, had imported nylon filament yarn and claimed nil rate of additional duty of customs. The customs department had held the company was not entitled for CVD exemption, but the court ruled in the company's favour.

Will the government respond with an alternative incentive? Pankaj Mohindroo, National President of the Indian Cellular Association, says the order will not hit manufacturing plans. "We believe India's fundamentals are sound. Incentives and enabling policies will make manufacturing happen. It is not dependant on one order," he says. 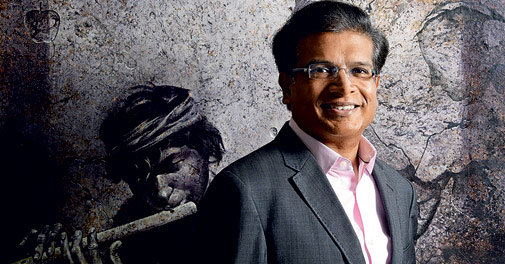 'The cost of components is falling... You can now give someone a 3G smartphone for less than Rs 3,000,' says DILIP MODI, Chairman, Spice Mobility. (Photo: Shekhar Ghosh)
State chief ministers and the central government, meanwhile, are busy in the revival act. Information Technology Minister Ravi Shankar Prasad recently visited a Samsung fabrication plant in South Korea where he was "blown away" by the investment figure - $14 billion. Maharashtra Chief Minister Devendra Fadnavis went to see Foxconn's plant in China in May. In the past few months, bureaucrats have toured factories in Taiwan, Japan and Germany. The Ministry of Communications and IT has formed a "fast-track task force" - a motley group of phone sellers, tax advisors, skilling experts and bureaucrats - to "re-establish and catalyse significant growth" in mobile manufacturing. One of the group's terms of reference reads like a CEO's directive to business line heads. "To achieve production of 500 million units of mobile handsets by 2019, i.e., annual manufacturing output of Rs 150,000 crore to Rs 300,000 crore - 20 to 25 per cent of total global manufacturing." If that is achieved, it can employ 1.5 million people.

That will be a goal worth going after. But there's many a slip 'twixt the cup and the lip.