Gig workers in India faced a decline in take-home earnings in 2021 with added input costs of fuel and platform commissions impacting their wages, a report by Fairwork India Team spearheaded by the Centre for IT and Public Policy (CITAPP), International Institute of Information Technology Bangalore (IIIT-B), in association with Oxford University stated. The report titled 'Labour Standards in the Platform Economy' examines the working conditions of app-based gig workers. In its third year, the study assesses eleven platforms, from service-domains such as domestic and personal care services, logistics, food delivery, e-pharmacy and transportation.

The study reports a decline in take-home earnings of workers across platforms as increases in work-related costs (such as fuel costs and platform commissions) during the second wave of the COVID-19 pandemic reinforced a long-term decline in the incomes of gig workers due to decreases in rate cards and incentives. However, in consultation with the Fairwork project, three platforms have committed to ensuring minimum wage after accounting for work-related costs for all their gig workers.

Flipkart, Urban Company, Big Basket  and Swiggy have scored 7, 5 and 4 out of 10 respectively according to Fairwork India ratings. This year, no platform scored more than seven out of the maximum of ten points, and none scored all basic points across the five principles including fair pay, fair conditions, fair contracts, fair management, and fair representation, the report stated. 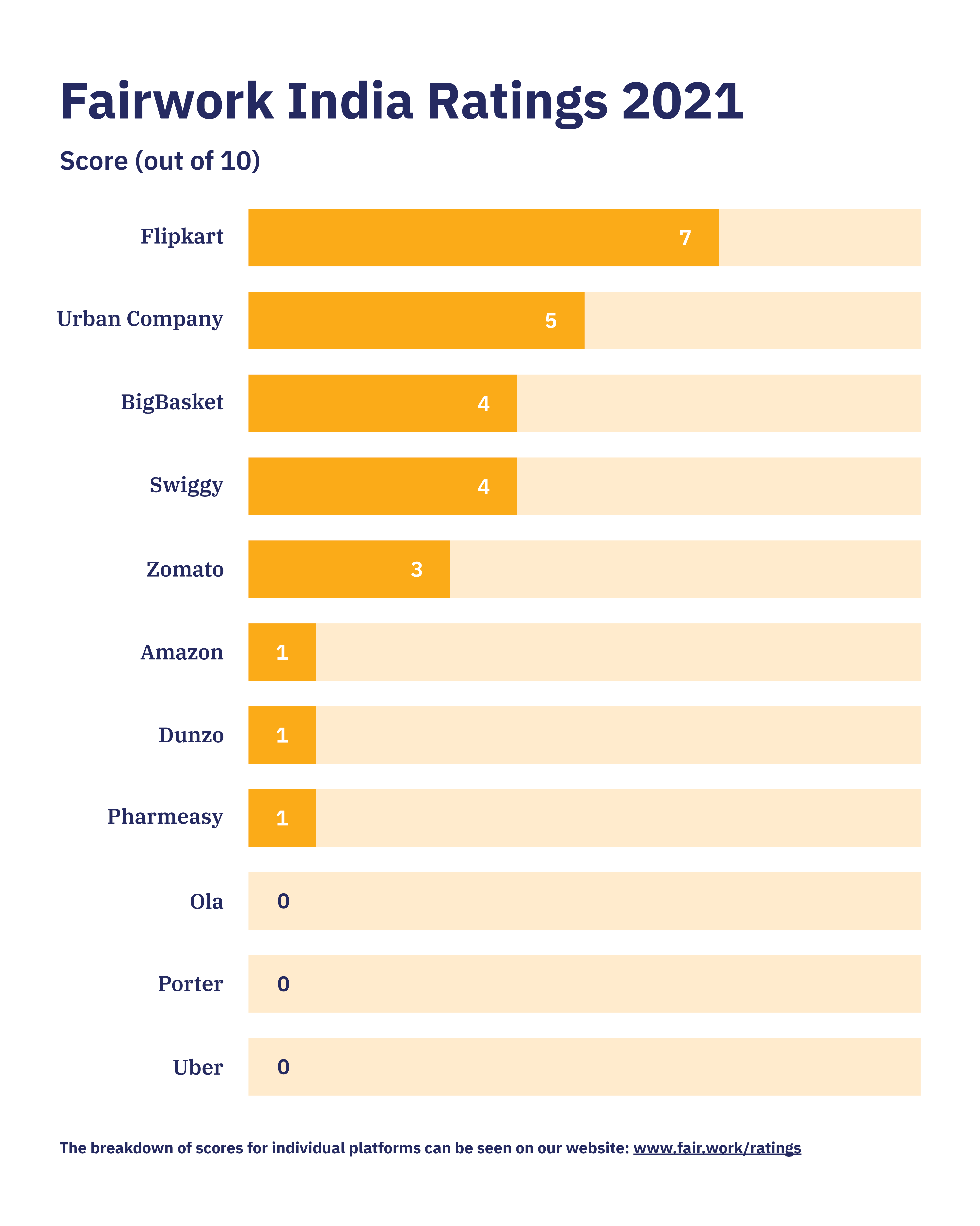 It combined desk research, worker interviews, and evidence provided by the platforms. The Fairwork India Ratings 2021 scores 11 platforms, including Amazon, BigBasket, Dunzo, Flipkart, Ola, PharmEasy, Porter, Swiggy, Uber, Urban Company and Zomato. A platform can earn a maximum of ten points. “We hope that platforms, workers, regulators and consumers, will use the Fairwork framework and ratings to imagine, and realize, a fairer platform economy in India,” said Professors Balaji Parthasarathy and Janaki Srinivasan, the principal investigators of the team. Researchers Mounika Neerukonda, Pradyumna Taduri, Amruta Mahuli, Kanikka Sersia, and Funda Ustek-Spilda, constituted the rest of the team.

When it comes to fair conditions principle, most platforms as per the survey were unable to effectively mitigate occupational risks that workers routinely face, including road accidents, theft, violence, and adverse weather conditions, in their work. Workers also faced the additional risk of contracting the COVID-19 virus in the past year. Three platforms provided their workers with accident insurance policies, had taken steps to improve claims processes and raise awareness of accident insurance, and had in place responsive emergency helplines. To deal with the threat of COVID-19, they also provided masks, sanitizers, a COVID-19 vaccination drive and insurance cover. Other platforms were either making policy changes, or were in the process of implementing them, to deal with the various occupational risks faced by workers, the Fairwork survey suggested.

It noted that there was an improvement in the accessibility and readability of contracts. Several platforms provided agreements in multiple languages.

“However, the comprehensibility of contracts remains a challenge, and many platforms lack either a defined notification period, or a process, before changes are made to worker terms and conditions.  Three platforms have committed to reducing the asymmetry in liabilities imposed on workers. Yet, the (mis)classification of gig workers as ‘independent contractors’ or ‘partners’, continues.,” the report said.

Of the platforms rated, seven had an appeals process for workers to challenge disciplinary action initiated against them. Some of these platforms further committed to speeding up their appeals process, to reflect workers’ sense of urgency. Only four platforms took a proactive stance to eliminate discrimination of workers on their platforms by consumers, by other workers, or by work allocation systems.

In terms of fair representation, while the overall rates of collective association among workers are low, instances of workers raising their collective voices grew. However, based on the study, a corresponding willingness to recognize and negotiate with worker collectives among platforms is lacking. ”It should come as no surprise if the reluctance of financially and technologically powerful platforms to bridge the asymmetries between them and their socially vulnerable workers fuels more protests,” the report added.