How we reported our Wipro cover feature

Business Today had been chasing the Wipro marketing and PR machine for an interview with Azim Premji since the beginning of 2011. The story we wanted to do was simple: how had Premji taken his eye off the ball and let the software business in his company slide into sloth.

His media handlers control which journalist gets to meet him and what he will talk about. They relax a little with the international press - and that too mainstream media - but it is clear that the Wipro chairman expects his people to do their homework very diligently.

Business Today had been chasing the Wipro marketing and PR machine for an interview with Premji since the beginning of 2011. The story we wanted to do was simple: how had Premji taken his eye off the ball and let the software business in his company, once admired for its processes and attention to detail, slide into sloth. Premji's company had been overtaken by Cognizant, just 17 years into the tech outsourcing business, and there were no signs of Wipro getting back into the race.

Through the year, we watched from the sidelines - and heard from CIOs and tech industry executives - how Wipro was churning from inside under its new CEO T.K. Kurien and for the first time in the company's history, Premji was allowing a CEO to, well, run riot.

Kurien had made it clear to Premji, we were told, that he would clean out the stable if it had to be done to get Wipro back in the reckoning. (In an interview, CFO Suresh Senapathy likens Kurien to former CEO Vivek Paul and describes both of them as ruthless). STEP UP TO THE PLATE, OR SHIP OUT
By the time our first on-the-record interviews with Wipro rolled in December, it was clear that Kurien was beginning to deliver. The visible signs were that the growth in business volumes - a measure of how much new revenues a company is making compared with the previous quarter - was back and the outlook was strong.

The more subtle change in the organisation was a heightened sense of accountability. I have covered the company since the mid-1990s and, even in the best of times, Wipro came across as a company that was just that wee bit bureaucratic compared to, say, an Infosys or Accenture.

And, over the years, especially after Paul left in 2004, the slide was marked. The same processes that it had worked so hard on ensuring quality were now slowing it down. And, with lip service to quality gaining ground, customers were downbeat on Wipro.

Kurien has changed that. And, how!

In the first of three interviews he gave BT for the cover feature, the CEO, relaxed in loafers and a cotton shirt, chuckled (some in the lower ranks at Wipro would have called it an evil chuckle) and told us the instance of a customer relationship management tracker that Wipro had.

The software was designed to capture customer interactions on a daily basis but it was updated by just about nine per cent of Wipro's sales and marketing people. Today "we are running at 100 per cent. Not a single guy has defaulted," he told us.

The CEO can be intimidating. This trait played out when we set up for a shot with Photo Editor Vivan Mehra. The theme that Vivan wanted to come through was of a driven CEO. I count Kurien among the most driven leaders in Corporate India today. The man starts his day at 5.30 am and often ends it not before 9 pm. A nugget that Associate Editor Goutam Das, who led the reporting for this story, dug out illustrates Kurien's manic work style: he had 38 meetings lined up for the four days he was at Davos late-January this year.

Back to the picture of a driven Kurien that Vivan wanted. After a little horsing around, Kurien and his chief marketing officer Rajan Kohli started talking about a strategy meeting scheduled for later in December. Into the conversation, Kurien reacted with a "I will kill you" on something Kohli said.

Kurien was play-acting for Vivan's sake but just for a couple of seconds, Kohli's face reddened; he was not sure if his CEO - nicknamed Kolaveri Kurien in Wipro - was serious or joking. Kolaveri in Tamil means murderous rage and a Tamil song Why this Kolaveri Di was a viral hit on the Internet last year. 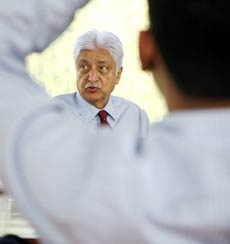 PREMJI OPENS UP
Our interview of Premji - I was meeting him after seven years - was less eventful but full of interesting insights into the personality. Premji, 64, is slowly but surely ageing. He walks with a pronounced stoop and the effort of climbing the narrow staircase up to his office is evident. He still goes for his weekend hikes around Bangalore, he told me.

It was a first time that I was in his office (and Kohli told me it was very rare he meets journalists in his office; Ahem!). It is a quaint office reflecting Premji's personality: understated and elegant.

Artfully arranged across his room are metal and glass globes, bronze sculptures, and a helicopter model. Artifacts and several white sea shells sit on his working desk together with a golden-coloured metal paperweight with an inscription that could well be a subliminal play at auto suggestion by Premji: "The buck stops here".

The office has wooden floors and tall glass windows and leads into a private terrace he has access to. The glass windows give a 180 degrees view of an eucalyptus forest outside.

Another anecdote that will stay with me for a long time to come is when I asked Premji about the Chandrika soap brand, which Wipro's consumer care division acquired in 2003. For some personal context, I tell him that my 78-year-old father has used the soap since when I can remember.

I am surprised when he tells me that the brand pulls in revenues of around Rs 70 crore. Then comes the jaw-dropper. "I use it to shave. It has the most coconut oil content among soaps," he tells me with a shrug that suggests that as someone who grew up in coconut country Kerala, I should know better.

Clearly, Premji was in a jovial and expansive mood. Lucky you, dear BT reader.

WHAT NEXT, WIPRO?
I might be reading too much into it, but a small bit from Premji's interview seems to be a direction that the chairman was giving his CEO. When we asked him to put Kurien's management style in context for us, he was generous with his joint CEOs, Suresh Vaswani and Girish Paranjpe, saying their leadership style was more "reflective, more management by consensus".

He supported Kurien saying the CEO was willing to "make the big swings". What he said next was interesting: with momentum going now at Wipro, he thought there was little need for "drastic changes now". "We require some amount of stability with our employees also," he said. Is Premji telling Kurien to slow down and signalling to Wipro employees that they will not face buffeting winds any longer?

Kurien himself was candid - in fact, I sensed some elements of Zen Buddhism in his view - on the direction that Wipro is headed. I directly quote what he told us in our first interview with him about where Wipro was on its current mend cycle:

During change, an organisation first goes through a shock. Then, as deal wins come in, there is a phase of super confidence. Then, it goes to depression because they hit a massive capability gap. You tell yourself 'I am not capable of doing this'. Then, you bring in people from outside. At this stage, the organisations start seeing this and say I can also compete. Then it goes through one more level of confidence. Then you hit the third big wall - what is the disruption I am going to play? Then you hit the depression of differentiation. Then you go past that with new solutions. Then you go back to the first cycle. Right now, we are hitting second cycle - the capability issue. Shock is over, confidence is gone.

Note that this interview was on December 13. Since then, Wipro and Kurien may have moved beyond the "capability issue" stage. The CEO has been actively hiring at the top and middle management levels, a push that was reported by The Economic Times here.