Meghnad Desai's book is a critique of economics discipline

Meghnad Desai, Emeritus Professor of Economics at the London School of Economics, member of the House of Lords, and a regular face on Indian TV, has written a remarkable book on the state of the economics discipline. It is a critique of the self-assuredness of a discipline in crisis. 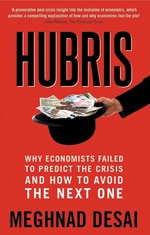 ttttWhy Economists Failed to Predict the Crisis and How to Avoid the Next One By Meghnad Desai PAGES: 304 PRICE: Rs 399 Collins Business
The economics profession has been in disrepute ever since the transatlantic economies slipped into a crisis and pulled global growth down. China, the best performing economy of the past decade, has not yet produced a Nobel Prize winner in the discipline, while Europe, home to so many Nobel laureates in economics, is unable to stabilise itself. Clearly, there is something as wrong with the economies of the West as with their economics.

Meghnad Desai, Emeritus Professor of Economics at the London School of Economics, member of the House of Lords, and a regular face on Indian TV, has written a remarkable book on the state of the economics discipline and of the world economy. It is a critique of the self-assuredness of a discipline in crisis.

Desai's argument is simple. Economics, or rather 'political economy ', as the discipline was originally called, developed as an intellectual attempt at understanding the way goods and services are produced, traded and consumed, and incomes are generated and distributed. It was a study of the practical world. Yet, in seeking to be regarded a 'science', economics not only became far too mathematical in exposition but also mechanical in its understanding and interpretation of human behaviour and social organisation. Relevance to an understanding of the real world was sacrificed at the altar of technique.

The first 200 pages offer a tour de force of the evolution of modern economics, and Desai writes for the lay reader, with the exception of chapters four and five that only trained economists may find more accessible than others. The hero in Desai's narrative is Joseph Schumpeter, the celebrated author of The Theory of Economic Development, who understood the significance of innovation and technological progress to economic development. Schumpeter's theory, that development progresses in long cycles of expansion and contraction of economic activity, was statistically validated by the Russian economist/statistician Nikolai Kondratieff, who discerned a 40-year cycle-two decades of growth followed by two decades of slowdown - that explained the ups and downs of western economies from the end of the 18th century through to the middle of the 19th.

Desai sees the global economic slowdown following the Lehman collapse and the transatlantic financial crisis in 2008 as the beginning of the downswing of a Kondratieff cycle, after the 1992-2007 boom period. Hence, his prognosis for economic growth over the next decade: things will go down before going up again.

What makes the current cycle different from the four cycles of the 19th and 20th centuries is the rise of China and other Asian economies. Can growth in these economies, and the innovation cycle in the US lift the global economy up? The prognosis for Europe is bleak, but there is hope for Africa.

The only weakness in Desai's argument is an inadequate appreciation of the role of public policy. Can policymakers learn from the past and intervene so as to modulate the impact of Kondratieff and other shorter-term (Juglar and Kitchin) cycles? It is possible that Desai would suggest that economic policymakers must first relearn their economics if they have to come up with relevant solutions.

Desai's book is an important contribution to contemporary economics as well as the history of economic thought that many will greatly profit from reading.