Turmeric, tulsi, lime, and more – fusion blends are the way forward for Luxmi Tea Group, the legacy tea company that was born out of the revolutionary zeal of Paresh Chandra Chatterjee back in 1912. MD, Tea Group Rudra Chatterjee shares his views on global tea-drinking trends with Business Today.

Over a hundred years old, Luxmi Tea Group was started by Paresh Chandra Chatterjee, a member of the Nationalist group, Anushilan Samiti when he decided to develop a tea plantation in independent Tripura back in 1912. The idea was that he and his friends would have a place where they can meet and discuss their views and plans about the ruling British. However, years later, Luxmi’s Makaibari tea made its way to the Royal kitchen and was served to Elizabeth, the late Queen of England. The company is now in transition as it embraces technology and the changing tastes of time with new flavours. Luxmi Tea Group acquired the Makaibari estates in 2014. It is also the parent company of OBEETEE carpets and Manor and Mews Ltd, a furniture company with stores in New York and London.

Luxmi Tea Company has 25 plantations, some in India and the rest in Africa. It exports tea to all major tea-drinking hubs of the world - Japan, Germany, France, UK and the US. Its tea plantations cover 50,000 acres of land and employ 25,000 people. Chatterjee says that despite its huge volumes of production, Luxmi has remained in the ‘premium’ segment of teas and even as it launches its fusion labels, it will in its price points and quality remain in that category. “Come to us only when you want premium tea, we do not dabble in mediocrity and there are several suppliers for average teas out there,” Managing Director, Luxmi Tea Company, Rudra Chatterjee, told Business Today.

Pandemic and the turning point

The pandemic has come with its lessons for Chatterjee, it was a time when he learnt two things: to sell tea online and to adapt flavours. The second led to the launch of a whole new line of fusion teas to match the tea-drinking whims of the health-conscious, globetrotting tea drinker. With its foray into flavours, Luxmi has made a deviation from its legacy, strait-laced pure line of Darjeeling or Assam teas. “During the pandemic, I started selling tea online. I started selling the two Darjeeling teas - Makaibari green, which was very famous in Japan called the Tokyo blend and Makaibari black, which became the most popular of the Luxmi teas called Queen Elizabeth blend because it was the same tea that the Prime Minister presented Queen Elizabeth. And then we did teas like green tea from Assam which is very famous in northwest India. We did CTC from Assam and a silverback blend from Rwanda. All these have started two years ago,” Chatterjee said.

At the same time, he started toying with flavours and soon became very serious about it. “I realised that when it came to flavours, we had everything to add value to our teas – our own tea plantations have fruits and herbs which are available for adding flavour – so we created fusion teas with turmeric, basil, jasmine, lemongrass, gandharaj or scented lime and so on,” said Chatterjee. His perception of blending tea and flavours has changed over time. “I used to look at flavoured teas in a certain way in the manner, say why would you take good tea and ruin it with flavours? Then I started changing my mind, not because I started liking flavours, but I saw that the flavour of tea itself was changing. For example, our new turmeric tea blend, jasmine, basil, gandharaj named Citrus Sky – these are all very healthy teas and I saw why people were adapting to these fresh blends,” he said.

The Indian tea story is strong as it stands as the second largest tea-exporter second to China and followed by Sri Lanka and Kenya. Among the top five exporters, India contributes 10 per cent to the world’s tea exports. In the year 2021, the total value of tea exports from India was around US$ 687.9 million. The major tea-producing areas of India are Assam, Darjeeling and Nilgiri, and the maximum export volume of India is made of black tea followed by regular tea and green tea. India's total tea exports during 2021-22 in quantity was 201 million kg. Tea Board of India data shows, the total exports during January-April 2022 were 65 million kg and valued at US$ 215 million, a 9 per cent increase from the same period in 2021. While the total volume of tea production dropped 4 per cent in 2021 as compared to pre-pandemic (2019) data, the prices have remained stable. 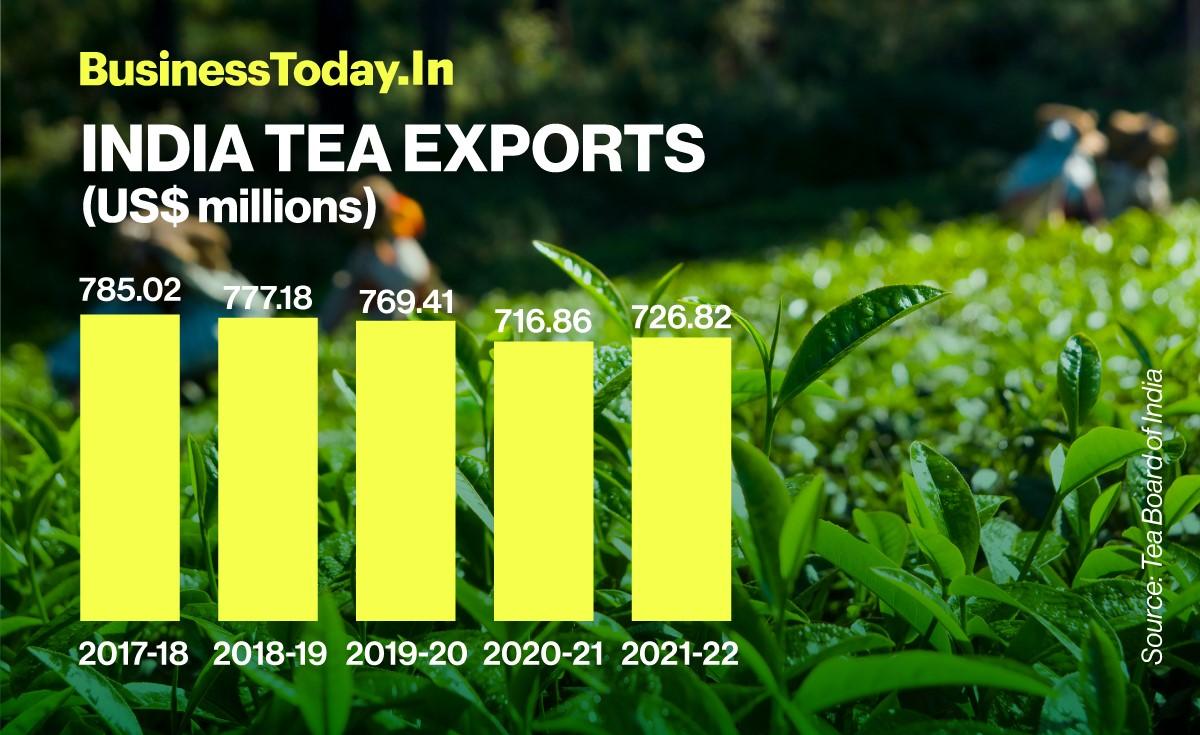 Makaibari – the best of Darjeeling?

Makaibari tea which is grown in the Makaibari estates of Luxmi Tea house is considered among the best Darjeeling tea and has connoisseurs across the world. “Our Makaibari tea has enjoyed global popularity and even Queen Elizabeth is known to have enjoyed it,” said Chatterjee. Our estates span 50,000 acres of exceptional terrain in India and Africa.  India may not be able to play the volume game, but it certainly has an edge over other countries when it comes to its tea, and we should be able to make the most of that.

Coffee or tea?
The privilege coffee has enjoyed over tea and has been able to percolate the market and make a wide presence is because of powerful branding – something tea has not been able to capitalise on.
“Coffee chains, branded coffees – all these have created a coffee culture. Tea has essentially remained a drink enjoyed by people at home and never enjoyed an aggressive presence like coffee. However, globally there is increased consciousness about high caffeine intake and its effect on health. Health-conscious people are gravitating towards tea," Chatterjee said.

Rudra Chatterjee also owns Furniture Company Manor and Mews Ltd. which was launched in 2015. It has launched stores in London and New York.  Luxmi Tea Group is also the parent company of OBEETEE, the handmade rug company. Tea, however, is the cornerstone of his business.
“Now our teas are available worldwide online. World over, people are beginning to understand the value of tea as a healthy drink as compared to coffee. We do a lot of business in the US, and it is now quite common to see people sitting down with a cup of Darjeeling tea in New York than a mug of coffee. It is a good day for tea!”