Chandni Chowk Lok Sabha Election result 2019: The BJP incumbent is leading by a vast majority followed by Congress and then AAP. With nearly 15 lakh registered voters, this constituency has voted for the party that eventually rules the country every single time since 1957 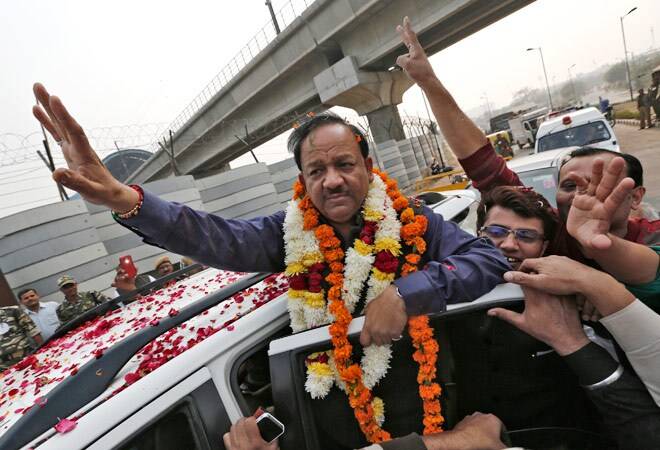 Trends so far show that Chandni Chowk's sitting MP Harsh Vardhan, also the Union Minister for Science and Technology, has a massive lead in the triangular fight for this seat against Congress party's JP Agarwal and AAP's Pankaj Gupta. He has bagged over 54 per cent of the vote share. Incidentally, Chandni Chowk is known to be a bellwether seat of Delhi, which in turn has traditionally decided who gets to rule India. With nearly 15 lakh registered voters, this constituency with 10 segments under it has coincidentally chosen the winning side every single time, right from Congress party's Radha Raman as its first MP in 1957 to BJP's Dr Harsh Vardhan in 2014.

In the 2014 Lok Sabha elections, Vardhan had bagged 4.37 lakh votes (45%), defeating two-time Congress incumbent Kapil Sibal with a margin of over 2.61 lakh votes, while AAP's Ashutosh - who quit the party last year citing personal reasons - came in second with a little over 3 lakh votes (31%).

In the Modi wave five years ago, although the saffron party had cornered only 33% votes in Delhi, it had managed to win all seven seats due to split of votes between the Congress and AAP. This same factor seems to have helped the party yet again, at least in the battle for Chandni Chowk.

In the campaigning phase the Union Minister had banked on his appeal to all sections of the society and the popularity of Modi apart from echoing the BJP's high-pitched nationalism narrative. On the other hand, Agarwal had tried to claw back lost ground for the Congress on the back of his old connections with local traders community, leveraging sentiment against GST and demonetisation apart from anti-incumbency. He had won from the constituency in 1984, 1989 and 1996. He is in the second place so far with close to 28 per cent vote share.

On the other hand first-timer Gupta, who had even released a constituency-specific election manifesto for Chandni Chowk, is trailing far behind in third place. All seven seats in Delhi had voted on May 12, in the penultimate phase of the elections and had recorded a 60% voter turnout, down from 65% in 2014.