Corporations today are running thin on patience with CEOs. They’re booting them out for non-performance, often without the courtesy of a golden parachute, says John Grumbar, Executive Chairman, Egon Zehnder International, the largest non-US-based executive search firm with revenues of SF 700 million (Rs 2,730 crore). Also, exclusivity to information is no longer in the domain of the CEO, who now increasingly finds himself working his influence across geographies and cultures, and managing intra-organisation conflicts. In this exclusive interview with Business Today’s Tejeesh N.S. Behl, Grumbar speaks about, among other things, the skill-sets required in the global CEO. Excerpts: 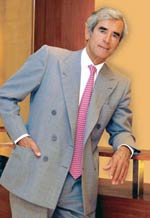 John Grumbar, Executive Chairman, Egon Zehnder International
Q. How has the role of the CEO changed over the years; what are Boards of Companies looking for now?
A. There has been an evolution—a few years ago, traditionally one looked for skills that had a lot to do with controlling a hierarchy, giving orders and the CEO typically had a lot more information than everybody else, working in his marketplace. Now, as we all know, the world is a lot flatter and everybody has to deal with lots of different countries. Typically, in the larger and even the mediumsized organisations, everybody has the same information and so the CEO no longer has the advantage of knowledge and has to demonstrate that he can inspire and lead. So, we are looking for slightly different skill-sets—the ability to influence across borders and the ability to grasp the developments in knowledge, which are happening much faster than before. You also need adaptability and ethics because as information travels further forcing more transparency, people get found out more quickly; and at the moment we’re seeing a lot of leaders being replaced, particularly in the financial services.

Q. So, is the CEO more of a coach or a mentor?
A. That’s obviously a key part of it— building a team around you. It’s very hard to find many organisations now where there’s a single dominant person who can really be effective without the support of a great team. I think choosing people has become critically important as organisations spread geographically. And the job’s become so much more demanding that CEOs are lasting less long—particularly in public companies. If they don’t perform, they have less time to prove themselves.

Q. But have the jobs become demanding or the compensation levels increased so much that people are not willing to cut you any slack?
A. Probably, but I think shareholders and fund managers have become impatient; they want results and ultimately they are the ones who call the shots. They are also becoming tough on compensation, cracking down on obscene packages. Companies have been trying for years to align the interests of the individual with the interests of the company and there has been a move away from highly leveraged compensations towards equity. But at the end of the day, the really outstanding leaders with a great track record are still able to command very large packages. And I think you’re going to see the same thing in India where there’s more and more competition for a limited pool of talent.

Q. What are the trends that are coming to the fore now, in terms of compensation?
A. The norm today is one year contracts. Also, golden parachutes— which were the norm five years ago—are no longer tolerated, especially in the UK and the US. But the really talented people want to make the most of this opportunity and want to make a lot of money. If they can’t get it in public companies, they will go into private equity and they’ll get into situations where they can have a piece of the action. But you’ll always see huge packages being offered to truly exceptional leaders because they are a rare breed and have proved themselves.

Q. As an executive search firm, what are the trends you are noticing?
A. Search is moving—it’s becoming more and more sophisticated as resources need to be allocated ever more quickly between ever increasing opportunities. Whole new sectors have emerged, for example, infrastructure and media and thus the hunt for human talent is becoming much more intense. Executive search is becoming much more sophisticated in terms of how we evaluate people—there’s a lot of research being done into the candidate’s psychology, on how you can really judge people and measure their expected performance after hiring them. Which means looking at the effectiveness of the boards— of managing executive teams, how people interact with each other and how members of a team complement each other.

Q. Is there a difference in the qualities that you look for in a CEO during boom times and lean times, such as right now?
A. Yes, I think there’s a pattern here, particularly in the financial services sector in the US and the UK. In boom times, you look for visionaries, charismatic people who perhaps have come up the marketing route, or creative people who can set out a path of growth for the company. When there’re hard times, as there’re now, you look for more control—so somebody from a financial background will score over a marketing guy; a person who’s less charismatic and more down-to-earth. That’s rather sad actually as now is probably the time that you need somebody even more visionary than in boom times because you need to rethink on how to make money in the future.

A big challenge is to bring in managers who are experienced to deal with the global capabilities of Indian companies?
For instance, if you take UBS, you could criticise their corporate governance, but they’ve now got a chairman who was their chief legal counsel whereas before they had a chairman who was their best dealer—a money person and a business-getter. That’s an extreme case but it’s the sort of thing that’s happening.

Q. So, are you suggesting otherwise— that companies stick with people whose core expertise lies in the operational domain of the organisation?
A. No, I’m not saying that— what I mean is that there’s an overreaction and people look for a safe pair of hands, often somebody internally who knows how to sort out the problem. They want somebody who can be trusted and will not do anything surprising or frightening, which is a pity because in situations like that, you may actually need somebody who can find a new direction for the company.

Q. What are the global trends in the movement of talent?
A. The movement between countries is not as great as everybody makes it out to be. Clearly, Indian companies have a huge reservoir of Indian nationals who are educated abroad and are keen to come back. The same is probably true of the Chinese. But, there is a shortage of people to man the growth of the economy; and the domestic problems in India are not going to be solved by finding expats and bringing them in. The more challenging thing for the next stage for India is bringing in managers who’re experienced to deal with the global capabilities of Indian companies, and Indian companies adapting themselves to the global order. Also, the issue of governance is a subject of great interest as a lot of Indian companies look for fresh capital to go global.

Q. But, is there a clear distinction between the cultural ethos of say, a European or a US CEO and an Indian CEO?
A. For anybody to succeed globally, they’ve got to understand the differences and they’ve got to appreciate what each others’ culture offers. At Egon Zehnder itself, we have Indians managing the Indian operations and Japanese managing the Japanese operations—but we share a certain way of doing things, which makes it possible to run an organisation in 38 different countries.

Shareholders and fund managers have become impatient; they want results...They are also becoming tough on compensation, cracking down on obscene packages?
Any organisation that aspires to be global will have to appreciate the slight differences and avoid the bad things. So, the French and the Germans are obsessed with—for legal reasons—social charges of their employees. They have to respect employee rights to a much greater degree than, say, Chinese companies which give little attention than they need to. Similarly, American companies are more reward-driven and less-unionised—so, I think every environment is different.

Q. How do you seek a cultural fit for an expat manager with an Indian company, which is often family-owned or managed?
A. It’s difficult, so you expose them as much as you can but it’s a gamble. What we haven’t yet seen is how will these “global” Indian corporations be able to get to the next stage when they become truly next generation, how do they cope with the second generation when perhaps there isn’t the talent they need within the family. This is the thing that Germany coped with after the Second World War where many family companies of significant size had to bring in professionals and I suspect that’s what is going to happen in India— it’s happening in China as well. Then it becomes very difficult for the founders to let go or slacken the reins or recognise that their own immediate family are not competent. So, more and more of our work, in fact, is helping companies plan about succession.

Q. Do you also advise family-owned companies on what cultural changes they might be required to undertake to attract a talented CEO?
A. A lot of great opportunities are missed because clients don’t give enough emphasis to integration. They think we are paying so much and this person’s going to come and sort out all our problems. In a way, they take a certain sadistic pleasure in letting these highly-paid persons go into the deep end and sort themselves out; whereas the more intelligent thing to do is to recognise that anybody going into any new environment has a learning curve. So, a little bit of investment early on, in terms of initiation and helping to understand how the company works, as also its culture, can massively increase the chances of success.

Q. Are there any generalisations in terms of managerial skill-sets based on geographies?
A. Some nationalities are much more adaptable than others—like the Dutch and the Scandinavians who have been brought up to work overseas. So, are the British to a large extent, less so the French and Germans—it’s only in the recent generations that they have started to go overseas. The Anglo-Saxons are perhaps strong in finance as a lot of them have a strong financial understanding and upbringing. The Germans—maybe it’s a caricature— are strong in engineering and the Italians are perhaps stronger on flair, design and creativity. So, there are some characterisations and caricatures and much of it is true. Some nationalities are very difficult to move around.

Q. So, does that play a role while hiring a CEO?
A. We try to be totally objective and look for evidence of what people have achieved. But obviously, you do start with a slight (bias)—if you have a very senior banker who’s come out of the Anglo-Saxon system, you might take him more seriously than a very senior banker out of the German system or the Czech system or the Chinese system. You do have judgments but because we work globally according to the same norms, same criteria and same competencies and compare skills from one country to another, we try to be really objective.