'India can never become a global manufacturing base' 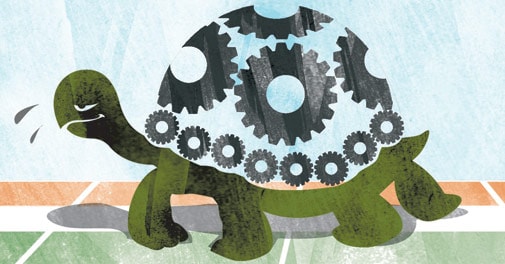 'India can call itself the next global factory in future'


India has followed a peculiar growth story over the years. While China focused on cheap, high volume commodity production, India has seen high growth in the services sector. The new government has begun its term hitting the right notes with the Prime Minister personally putting his weight behind the "Make in India" campaign.

Right from creating a single window facility for addressing investor concerns, identifying key manufacturing sectors, to creating a common platform to unite state governments, bureaucracy and corporate leaders; the government seems serious in its intent to elevate India's "ease of doing business" rank internationally. Overhauling complex compliance procedures and reforming archaic labour laws will put an end to institutionalised corruption and encourage entrepreneurship. Easing the FDI norms in construction, rail infrastructure and defence should only be the beginning of a series of positive signals.

India is blessed with a large labour pool and admirable levels of judicial transparency. It can leverage its territorial position to play a critical role in the global supply chains. Doubling up as a potential high consumption market can keep demand fluctuations in check as well as save up on the logistics costs. And if it can internally strengthen on three fronts: cost (cheaper labour), quality (high skilled workforce), and supply chain (robust infrastructure), India can call itself the next global factory in future.

'We lack a manufacturing culture like Germany, South Korea'


Despite intentions to scale up manufacturing since 1991, the industry's contribution to the GDP has declined. Manufacturing has been constrained by onerous regulations and policy, be it labour, land or environmental clearances. Successive governments have failed to implement these politically expensive but vital policies. Policies on taxation and customs are archaic to the extent that it is cheaper to import things like medical equipment rather than manufacture it domestically.

But that's just the tip of the iceberg. We lack a 'culture of manufacturing' prevalent in Germany and South Korea. This primarily includes your best brains not wanting to join the sector. Its outlook is bleak. Manufacturing lacks linkages. The lack of infrastructure pushes up the logistics cost, which at 14 per cent of GDP is one of the highest globally. The lack of a vocational training system like Berufsausbildung in Germany and Austria means lack of skilled labour, and inadequate capital expenditures by successive governments means high finance cost. This decreases manufacturing competitiveness and visibility of future investments.

The idea of promoting manufacturing was to ensure our demographic dividend finds meaningful employment but our labour conundrum has ensured that in labour-intensive manufacturing, China, Vietnam and other East Asian countries have a massive lead. Our past track record is very uninspiring.