News
Magazine
Back of the Book
Move Away Bicycle, Because the E-Cycle is Here

Move Away Bicycle, Because the E-Cycle is Here

Tired of pedalling your old bicycle? Time to move to an e-cycle for that extra oomph

Hero Lectro, with 14 models, has a 70 per cent share of the country’s e-cycle market.

Do you remember the first time you got on a bicycle? The unsteady first few pedals and then the feeling of freedom as you learnt to balance it and ride it into the sunset. Okay, you probably just rode it to the park as in all likelihood you learnt cycling as a child. While most of us rode the cycle to school or the neighbourhood park with friends when growing up, the environment-friendly two-wheeler was soon abandoned in the shed as we moved to fancy fuel-guzzling four-wheelers. If you would like the fun of cycling combined with the suitability of an automobile (think more speed, less sweat), try out an e-cycle—a cycle with an electric motor and battery.

Unlike an e-scooter or e-bike, an e-cycle features more of an assist function rather than a full-blown electric engine. So in case of an e-cycle your pedal movement is assisted as you ride, taking some of the pressure off your legs. The motor revs up when your speed drops below a certain level, giving you that electric power boost to lift up your mood and your speed, enabling you to keep feeling the wind in your hair, no matter how tired you are. Similarly, once the speed goes above a certain level, the motor cuts out allowing you to cruise along at a steady speed. While e-cycles have become all the rage globally, especially in Europe, they are still at a nascent stage in India. As per a report by research firm Mordor Intelligence, the e-cycle market in India was valued at $1.02 million in 2020 and is expected to double to $2.08 million by 2026, projecting a CAGR of 12.69 per cent during the forecast period (2021-2026). Over the last couple of years, several companies have launched e-cycles in India. These include Hero Lectro, GoZero Mobility, Zadd Bikes, Being Human, Giant Bicycles, EMotorad and Nexzu Mobility, among others. Given the lack of cycling lanes in the country, it’s unlikely a lot of us will move to e-cycles for our daily commute. But it is still fun to take one for a spin. So what should you look out for when buying an e-cycle? Rather than getting bogged down by price, speed, mileage, assembly, etc., Aditya Munjal, CEO of Hero Lectro, suggests that you first think about what you plan to do with the e-cycle. “While selecting an e-cycle, one should identify their purpose of opting for the e-cycle and select the bike best suited to them in terms of range and ergonomics,” he says. Hero Lectro offers 14 models, with the Hero Lectro F6i priced at Rs 54,999 being the fanciest. The e-cycle has a crossover MTB frame making it ideal for both on and off road. It comes with a detachable battery that gives it a range of 60 km-plus with a single charge.

It also has Bluetooth connectivity, an LED screen and USB charging. Hero Lectro currently has 70 per cent market share of the e-cycle market in the country. If you live close to office and decide to commute to work then chances are that you need something that is light, durable and easy to store once you get there. In that case, you may like to explore the idea of a foldable cycle. Or you may like to explore the idea of a foldable cycle simply because it’s super cool. EMotorad has launched Doodle. Priced at Rs 79,800, it is India’s first foldable e-cycle. With a maximum speed of 25 km/hour, it has a range of 40 km on a single charge. “It is a thought-through fat-tyre e-bike. It is also known as the SUV of e-bikes owing to its design and terrain-friendly structure,” says Aditya Oza, CMO and Co-founder, EMotorad. The world’s lightest folding e-cycle is manufactured by the UK-based Hummingbird and they ship to India. Priced at £4,495 (around Rs 4.5 lakh), the Hummingbird Electric Gen 2.0 weighs only 10.3 kg. It gives you a range of 50 km on a single charge, with a top speed of 25 km/hour. It’s available in four colours including canary yellow and by paying £500 (a little over Rs 50,000) extra you can get a customised paint job done. Another thing to look out for is the battery. Most e-cycles have lithium-ion battery packs with 8Ah-14Ah capacity, with voltage from 24V-36V. Depending upon the model you select, your battery life can vary significantly. Typically, the most common battery in e-cycles is a 36V, 10Ah one. On a single charge this can take you up to 50 km using the highest level of assistance or up to close to 100 km using the lowest. The higher the capacity of your battery, generally, the longer you can ride. Of course, these are just guidelines. Things like terrain, carrying heavy weight, etc., can drain the battery faster. Most e-cycles come with a two-year warranty. But batteries generally need to be replaced every three years. 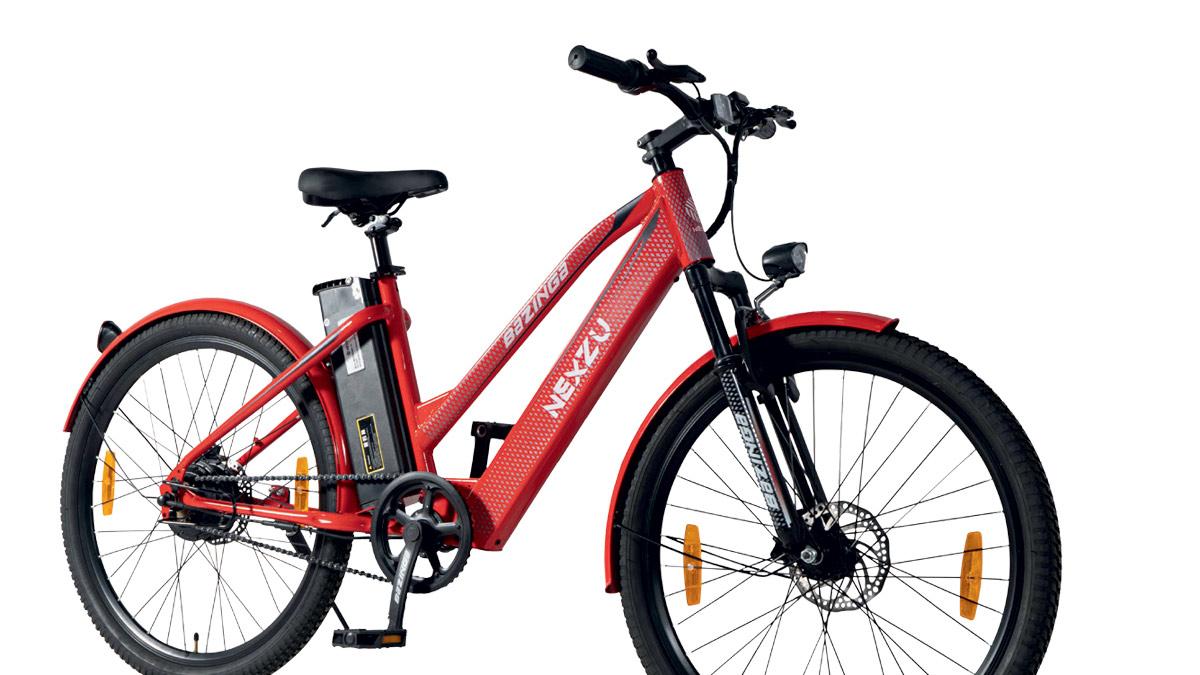 Nexzu Mobility’s Bazinga offers a 100-km range on a single charge. It has a 14.5Ah lithium-ion battery and has a battery life of 750 charges. Priced at Rs 49,000, the cycle gives a top speed of 25 km/hour. “Consumers can choose based on the riding range, user accessibility, technology used, build of the cycle, and travel distance,” says Atulya Mittal, Founder, Nexzu Mobility, adding that the Bazinga is ideal for commuters as well as those who ride for fitness. Of course, if you want an e-cycle for bragging rights then check out the limited edition Black Trail BT-01. Priced at $80,000 (around `60 lakh), this German e-cycle is considered the most expensive in the world. What’s peculiar is that it looks like something from the 1930s as that was the inspiration. Constructed of lightweight carbon fibre, aerospace aluminium, titanium, and magnesium, the e-cycle has a top speed of 100km/hour and weighs just 16 kg. Its 17Ah lithium-ion battery gives you a range of 200 km on a single 2.5-hour charge. If you enjoy cycling but want something with a little more speed and panache, the e-cycle is for you.