A first-of-its-kind study of the wine market in India shows that 65 per cent of the nation’s wine consumers live in two cities—Delhi and Mumbai—yet the Rs 300-crore industry is growing at 25 per cent. Dhiman Chattopadhyay goes into the details.

Twenty-five million Indians are drinking wine as you read this piece—that’s over six times the entire population of Guinness-drinking Ireland. And they are not just sipping Indian varietals. Everything from the best of Bordeaux and Napa Valley to Australia’s Jacob’s Creek and Italy’s Gaja wines—is now just a walk-to-the liquor-store away.

But here’s what will really light up the eyes of wine makers, importers and entrepreneurs across the world: 25 million is just 2 per cent of India’s population. And they consume a mere 1.1 million cases of wines annually (each case contains 9 litres of wines). Market watchers predict that by 2012, 10 per cent of Indians will be drinking wine.

So, what is fuelling this boom? A study conducted by the Washington-based research agency JBC International at the behest of the Wine Institute of California (where the cradle of wines in the US—the Napa Valley—is located) has analysed the reasons for wine’s success story in India.

The report, titled Comprehensive Study of the Indian Wine Market, says the annual growth rate of 20-25 per cent over the last six years will continue for the next eight years, at least, with more and more Indians taking to wine.

“The JBC International staff travelled to India for 21 days to conduct a practical on the ground research—travelling to Mumbai, Bangalore, Delhi and Goa and interacting with people from all walks of life,” says James Gore, the principal author of the monograph.

So, what are Indians drinking? “The tastes and preferences of the Indian population err towards still wines and, more specifically, table wines. A majority of sales has stayed on traditional red and white wines,” says Gore. While the current consumption is 1.1 million 9-litre cases at a value of $60 million (Rs 300 crore), it is poised to cross the 2-million cases mark by 2011. The economic gloom hasnt affected the wine industry in India
It is not that imported wines and, therefore, foreign wine makers alone have profited from India’s growing love affair with wine. On the contrary, protectionist policies at federal and state levels have meant that cheap foreign wines cannot compete with domestic wines. So, while a Sula’s Dindori Red sells for Rs 700 (approx.) and is one of the most expensive Indian wines, almost all foreign wines are priced above this. Such impediments, notwithstanding, the 80 registered wine importing firms in India currently bring in over 120 foreign wine labels to the country. 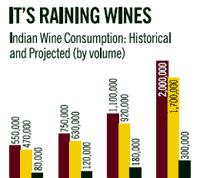 Click here to Enlarge
“French wines obviously dominate the market,” says Subhas Arora, President, Indian Wine Academy. The study confirms this, with statistics showing that the French, indeed, control 45 per cent of the imported wine market share. But their dominance is being challenged by new world wines from Australia and Italy, which together control almost 30 per cent of the market and they are growing rapidly as Indians become aware of good wines from other countries.

The real growth story, however, is in domestic production. Sample this: there were only six Indian wineries in 2000. Today, the number has grown to 65. Around 85 per cent of these are located in Maharashtra— Nashik, Pune, Baramati and Sangli. In Dindori—an elite area of Nasik—land is sold for Rs 10 lakh per acre today. This same land was sold for Rs 2–3 lakh in 2004. Click here to Enlarge
Between them, the top five players (Château Indage, Sula, Grover, Vinsura and Reveilo) produce over 920,000 cases of wines every year—a figure projected to be 1,700,000 by 2011 as relative newcomers on the block (Pernod Ricard, Mallya’s United Spirits and the multi award-winning new brand Château d’Ori) produce a further 480,000 cases by 2011. The best part is that the market is going only one way—up. “Our imports are growing by 50 per cent even in a year when recession seems to be all pervasive. Nearly 75 per cent of India’s population is under 25 years old, so this is an audience that is yet to really mature to wine drinking. So, nothing, not even a recession, will stop the wine industry in India from booming,” says Cecilia Oldne, Manager (International Business), Sula.

It’s not just the men either. More and more women are joining the wine sipping brigade—a reason, experts say, the sale of red wines are going up (apparently, women prefer red wines to whites across the world). “A survey conducted on the members of a wine club in India showed that nearly 50 per cent of consumers were women and this segment is growing at 5 per cent every six months,” says Dharti Desai, CEO, Finewinesnmore.

The recession and economic gloom, notwithstanding, the wine industry in India is on a spirited upswing and at present, at least, nothing, not even a draconian regulatory system, can stop its march. As Oldne concludes, quoting Napoleon Bonaparte: “In victory, you deserve Champagne, in defeat, you need it.”