How Suzuki got Maruti

Pursuing global auto giants to pick one as the partner, developing a modern supplier base, keeping politicians and lobbyists at bay... Maruti's founding management team braced all this and much more to create the iconic car. 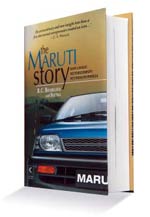 Pursuing global auto giants to pick one as the partner, developing a modern supplier base, keeping politicians and lobbyists at bay... Maruti's founding management team braced all this and much more to create the iconic car. R.C. Bhargava, a key member of the team, recounts the inside story of Maruti's birth in his forthcoming book co-authored with Seetha. Exclusive excerpts:

How Suzuki trumped Daihatsu, Mitsubishi and others:
By mid-January [1982], Daihatsu, Nissan/Subaru and Mitsubishi were the only companies in the running for partnering Maruti. British Leyland's Morris Ital was not found suitable. Renault had not supplied information that had been sought about the R-9...Fiat had also indicated that its capacity to render engineering and technical assistance was limited...Peugeot had a good car... but could not meet Maruti's time schedule.

One day, in February 1982, I was handed over a telex message...My blood ran cold when I read it. The telex was from Daihatsu to Escorts, assuring the latter that it intended to manufacture a car with it, and that it was maintaining the relationship with Maruti only to understand the Indian automobile market...How it landed up at the Maruti office is a mystery that has never been solved...Maruti was virtually stranded without a viable partnership opening....

When all seemed lost, providence provided a solution in the form of Suzuki Motor Co (SMC). A telex arrived within days of the Daihatsu fiasco, saying that SMC was very interested in the project and if it was not too late, it would also like to participate in the selection process. I telexed back saying Maruti was ready to talk. This unexpected development was also one of those events which show how chance shapes events and destinies. An article had appeared in the January 31, 1982 issue of India Today which recapitulated the twists and turns in the Maruti saga...and carried a picture of the Daihatsu Cuore as the likely choice for Maruti. A director of SMC, flying from Chennai to Delhi to catch his flight to Tokyo, read the India Today article.

He was horrified that SMC's arch rival, Daihatsu, was apparently walking away with such a big project and the SMC board was not even aware of this. He promptly alerted SMC headquarters, which lost no time in contacting Maruti. It later transpired that the letter which Maruti had written to Japanese car companies before the visit made in November 1981 had gone to the overseas engineering division instead of the overseas marketing division. This was treated as a routine enquiry and was apparently not brought to the attention of anyone in the top management of Suzuki.

SMC quickly followed up my telex. S. Nakanishi, who was then a young executive in the overseas marketing department, and is presently the Managing Director of Maruti Suzuki India Limited, was the first to arrive...SMC was asked to give a detailed commercial proposal in the next week or ten days. Within a few days, SMC sent what [DV] Kapur [Heavy Industries Secretary] recalls as a three-metre-long telex with a complete proposal for collaborating to manufacture an 800cc car.

Building faith, keeping politicians at bay:
The first 192 cars to roll out of the factory in December 1983 were almost entirely Japanese cars, with only the tyres and the batteries being Indian, supplies coming from Chennaibased MRF and Kolkata-based Chloride India (later renamed Exide Industries) respectively. The indigenisation percentage was a mere 2.76 per cent and it stayed at less than 10 per cent till March 1984.

The December 1983 deadline of starting production and sale of cars necessitated starting production with imported SKD kits.... Maruti had committed to achieving 95 per cent indigenisation in five years.... Maruti, however, had to face an uphill task in developing the vendor base. For almost the entire period after 1950, the supply of cars was less than the demand, with long waiting periods. In this situation, the manufacturers had little concern for providing quality cars.... The poor quality of original equipment meant a thriving market for spare parts, the shoddy quality of which ensured a steady demand of replacement pieces. There were enough stories about automobile manufacturers themselves, or their relatives, having majority or full stake in component manufacturing companies and making their profits from selling spare parts at high prices.

Maruti recognised the huge challenge before it, as hundreds of suppliers had to be persuaded to not only upgrade technology and manufacturing processes but also to change their attitude to quality and meeting obligations and commitments. Most vendors did not think that a small delay in meeting their supply schedules, or some shortfall in quantities, was a significant matter.... The problem of developing good vendors was compounded by the fact that in 1982 there were very few people in India who would have taken a bet, at almost any odds, on the success of Maruti, or the company achieving a production volume of anywhere near 1,00,000 units within five years. Maruti was seen as a political project. During 1984-85, the first full year of operations, Maruti exceeded its production target of 20,000 units... At that point, vendors, as many others, changed their attitude and realised that Maruti might not fail, and could even dominate the car market in India....

As the possibilities of Maruti beating the odds and becoming a success story increased, many people wanted to invest in component manufacturing and become suppliers to Maruti. Some thought political connections could be a substitute for experience, because Maruti was a public sector company. Mathur [V.K., one of the two officials in charge of vendor development] recalls one politician approaching him in his office at the factory and saying that he had ten acres of land next to the Maruti factory and a few crore of rupees. "You tell me what I should produce." Mathur replied that he would not be able to offer any suggestions and he could see the components displayed, choose what he wanted to manufacture, get the technology and return with a sample. "Come back then and we'll discuss it." The politician went into a monologue about how close he was to Mrs Gandhi and that she had sent him. As Mathur listened patiently, the man said, "I want you to know that I got Mr Krishnamurthy his job."

This gave Mathur an opening. He said, "Saab, since he is beholden to you, why don't you go and ask him?" The man left quietly. The next morning, on the way to the weekly project review meeting, Mathur told Krishnamurthy, "Sir, yesterday I was privileged to meet the person who gave you your job," and recounted the incident. Krishnamurthy laughed and said he would take care of the matter. The politician never reverted. The message went out to the Maruti management—no compromises. Getting the first dealers: The concepts of marketing and consumer satisfaction were almost alien to the automobile industry of that time. With the supply of cars lagging far behind demand neither car manufacturers nor dealers had to bother about marketing the cars or going an extra mile in providing after-sales service. Maruti was to change all that.... The dealers were going to be the lynchpin in the whole marketing exercise, since they were the public face of Maruti, and much thought went into developing a sound dealer policy....

Dealer selection was the only area where the management took political recommendations into account. It was felt that one of the requirements of success of a dealer would be his relationships and influence in the allotted territory. If the candidate met all the other requirements of being a dealer, it would be an advantage if an important political leader, familiar with the territory, would make a success of the dealership....

Interestingly, one of the applicants for a dealership was a young man from Ludhiana called Sunil Bharti Mittal. He came with his father, Sat Paul Mittal, who was then a Congress MP. SMC had also recommended his name, as he was importing and selling their portable generator sets in India. However, he came somewhat late, as a dealership in his town had already been committed to another person and there was no scope for a second dealer. Years later, Mittal got in the telecommunications business and founded the Bharti Group, which has become the largest mobile telecommunications company in India, and has diversified into other businesses. Mittal is now among the world's richest persons.