The simultaneous rise of China, Japan and India is posing a geopolitical conundrum. 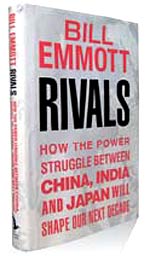 History has a strange way of repeating itself. The balance of power “game” in 19th century Europe between England, France, Russia, Prussia and Austria may well be replayed in 21st century Asia. Rivals, How the Power Struggle Between China, India and Japan Will Shape Our Next Decade, by Bill Emmott, is a riveting book that focusses on the rivalries and fault lines that are shaping the geopolitics of Asia.

Emmott, who was Editor of The Economist from 1993 to 2006, argues that the Indo-US nuclear deal is probably Step 1 of an emerging geopolitical equation that will increasingly shape global relations. And nuclear cooperation, says Emmott, is just a cover for closer strategic ties between the US and India. Why? To counter the economic, political and military rise of China, the emerging hegemon in Asia.

Emmott is no sensationalist. His tone throughout is sober and reasoned. The book makes it clear that China is decades ahead of India on every conceivable parameter. But, he says citing independent research on the subject, China’s growth over the last decade has not been as smooth as official statistics suggest. Rather than having maintained a steady 9-10 per cent trend line growth over this period, China’s growth curve has been on a roller coaster. In 1998-99, for instance, growth in its electricity consumption was only 3 per cent. Yet, the official GDP growth figure for that year was 8 per cent—a statistical impossibility. That is not to say that its awesome growth is not real. Rather, the Communist Party there evens out the spikes (both ways) and presents figures that look too good to be true.

It is this growth, and the resultant prestige and influence that it bestows upon China, that is most likely to lead to, if not a conflict, then at least intense competition, with Japan and India. Unlike many other authors, Emmott does not treat Japan as a tired power, but rather, as a rejuvenated one that is once again trying to reassert its position in the comity of nations. In this, he says, it is likely to find an ally in India—at present the weakest of the three—and encouragement from the US and the EU.

There are other flashpoints. India and Japan both have massive, unresolved territorial disputes with China, which itself is grappling with its still festering annexation of Tibet and dispute with Taiwan. Then, there’s the North Korea question, too. The book notes that this is the first time that Asia will see the simultaneous rise of three global powers. How each country responds to the rise of the other two will, thus, define international relations over the foreseeable future. So, is this a formula for conflict or cooperation? Emmott quotes a senior, but unnamed foreign ministry official in India as saying: “Both of us (India and China) think that the future belongs to us. We can’t both be right.”

But then again, Emmott argues, they can. 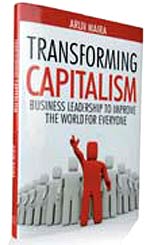 The last 17 years have been fantastic for Indian capitalism, which has delivered what Nehruvian socialism promised but failed to. Now, poised on the threshold of maturity, India Inc. must find answers to the new challenges—ecological degradation, persistent poverty and gutwrenching inequalities—that still stare the country in the face.

Arun Maira, Senior Advisor, Boston Consulting Group, has spent a quarter of a century advising Indian and multinational companies on business and related issues. In his new book, Transforming Capitalism, he now poses four fundamental, but related questions: Can the business of business be limited only to business? What is the true meaning of CSR and how can corporations serve society better? Can a business leader autonomously change the role his or her corporation performs in society? And, how will a collaborative process of change, involving several interacting institutions—like private and public companies, NGOs and the government—be facilitated? These are legitimate queries that need answers. Maira draws on his vast experience in Indian and international business to suggest a roadmap for the future.

Indian Inc. is now sufficiently developed for it to evolve an “Indian system of management.” This book can be an early milestone in that process.