Some of the new laws may be similar to old ones, but they come from a digital perspective. 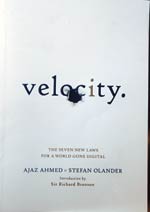 It would not be inaccurate to say that Velocity is a management book with a difference. The cover visual is arresting, with its impression of a bullet hole - signifying speed as well as disruptive change - piercing the title. The format is refreshing, presented as a discussion between the two authors. They are a distinguished pair, which adds to the book's credibility: Ajaz Ahmed, founder of digital ad agency AKQA, and Stefan Olander, Vice President of Digital Sport, Nike. The content is enjoyable, rendered in simple, easy-to-digest language. Interest flags only when the two authors seem to echo each other's opinions, but thankfully this does not happen too often.

The seven laws the authors have formulated present some serious points to ponder over for companies struggling to cope with the disruptive advances in technology. It is to Ahmed and Olander's credit that they make their points using examples not just from Nike, but also from other innovative companies such as Apple, Facebook and Amazon. Velocity is replete with smart one-liners, some from the authors themselves, others from iconic figures both in the world of business - such as the late Steve Jobs and Mark Zuckerberg - and elsewhere. The aphorisms, highlighted in large font sizes on some of the pages, serve as snappy, ready-reference management 'lessons'.

Sample this: "Don't look back; something might be gaining on you". This gem, from legendary American baseball player Satchel Paige, underscores the first law of Ahmed and Olander: "A Smith & Wesson beats four aces". If you (a company) think you hold all the aces in your sector, do not forget that a disruptive change agent, - with the symbolic Smith & Wesson revolver - could blow it all to smithereens. So look ahead, and continue to evolve to stay ahead.

What are the six other laws? "It is easier done than said" implies companies need to move quickly. The watchword is deliver, deliver, deliver... prepare prototypes, ally with experts, do everything needed to move fast. "The best advertising isn't advertising", another law, is a critical one in the current age when the consumer is bombarded with - and has, as a result, grown immune to - thousands of advertising messages every day. To make advertising effective, it must connect with the consumer, providing a meaningful service. Yet one more law, "Convenience is the enemy of right" exhorts leaders to obsess about details.

The law, "Respect human nature" drives home the message that executives and companies should never get so caught up with technology that they forget the human beings at the end of the line: the consumers. "No good joke survives a committee of six" urges companies to follow what the authors call "informed intuition" rather than long decision-making processes involving several people. And finally, "Have a purpose larger than yourself" urges leaders to create something that outlasts them. There are many ways to achieve this, but all of them need commitment, discipline, passion and imagination.

In many ways, the new laws proposed by Ahmed and Olander would seem a rehash of old principles. After all, innovating to survive, taking quick decisions, using advertising that connects, focusing on discipline and so on are fundamental principles of good business. But the book still scores because these principles are tackled from the digital perspective. Most companies today need answers to the myriad challenges posed by modern technology. Velocity is a good starting point.