'The Age of Instability... is a good read'

The book is a good read for anyone who wants to understand the various events that led to the global economic crisis, says N.S. Kannan. 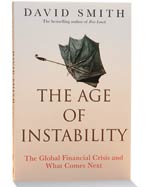 The Age of Instability: The Global Financial Crisis and What Comes Next
By David Smith
Publisher: Viva Books
Pages: 294
Price: Rs 695

When I was recently asked by an international researcher whether the lessons of the global financial crisis would be forgotten, I had mentioned that the ongoing sources of uncertainty such as Europe's sovereign debt issues, political news from the Gulf and the volatility in Indian equity markets would help prevent complacency from setting in. Of course, numerous books on the financial crisis have also not allowed us to forget the crisis, as we browse through the titles in any bookstore.

Yes, the global financial crisis of 2008 has been one of the most researched, discussed and commented upon events in recent years. To my mind this is deservedly so, given the far reaching implications it has had for financial markets worldwide, from the failure of large, important financial institutions to the questioning of traditional economic thought processes. It is, therefore, important to analyse the causes of an event of this magnitude and to take preventive measures to avoid any recurrence.

In this context, David Smith's book The Age of Instability may seem as one in a series of commentaries on the global financial crisis. The difference between other analyses of the crisis and the one by Smith lies in the author's recognition and linking up of economic events since the 1980s to the eventual build up of pressures in financial markets and the collapse in 2008.

The author draws out and highlights the causes that led to the financial crisis without, as many others have done, limiting his starting point only to the last decade. For example, the author has articulated that the reunification of Germany and the consequent impact on the economic thought process regarding capitalism, together with greater globalisation, were strong drivers of the sustained period of economic growth and stability preceding the crisis. The author has also highlighted the impact of events, such as the Asian financial crisis, the US technology stock bubble and the US terrorist attacks, on monetary policy and its consequent impact on financial markets, particularly the housing market. The book, therefore, provides a unique and sufficiently historical background to the build up of the excesses that led to the financial crisis.

The author has done an extremely good job of presenting a historical, detailed and yet simple to read account of the global financial crisis. The events covered in the narrative are flush with examples and quotes from people close to the developments, and will give readers a good insight into the mindset of policymakers, academicians and industry practitioners at the time the events unfolded. The book is a good read for anyone who wants to understand the shaping of economic policies and financial markets that led to one of the severest crises the globalised world has seen.

The reviewer is Executive Director and Chief Financial Officer of ICICI Bank. These are his personal views and not of the organisation