Rajeev Peshawaria goes to the core of the leadership

Rajeev Peshawaria goes to the core of the leadership issue. 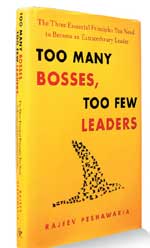 Think very carefully before you decide you want to be a leader, because it is not a glamorous role, it is not about power. These are hardly words that would attract hordes of paying students. But it is what Rajeev Peshawaria believes.

The core of this book - by a man who found his calling after 10 years of being a currency trader and a trainer - is that leadership cannot be learnt in a classroom, but comes from "deep energy" created by clarity of purpose and values. Peshawaria is a guru in the true sense of the term. He does not 'teach' using case studies, formulas or theories. He guides his readers along a path of self-discovery: whether you finally graduate from a boss into a leader is mostly up to you.

So I ask Peshawaria, who was in India recently to launch his book: why write a book if he does not believe in formulas and theories? He says the book is not intended as a classroom training programme, but was written to make people realise that formulas do not work.

Then Peshawaria springs a surprise. His biggest hero is not some alpha male with a bone-crushing handshake, but Mahatma Gandhi. "When Mahatma Gandhi was beaten up and put in jail, how did he reenergise himself and come up even stronger every time? He closed his eyes and imagined a free India... That energised him again," he says. "His purpose was very clear. He closed his eyes, and asked himself, what are my values? And he knew he should not hit back even when he was being beaten up." As I write this, India is being roused to a battle against corruption by Anna Hazare, a man who seems to have similar clarity of purpose and values.

Peshawaria was not a born leader, neither at school nor during his early career. After an MBA from Vienna, he came back to India to work for American Express in the 1980s, as a currency trader. Here he observed that when eight people with very high IQs are put together, the collective IQ falls "because they are not able to agree on anything".

That is when his disillusionment with bosses began. But it was only in 1994 that he made the switch to a full-time career in leadership, after a computer-based trading simulator that his team designed won the chairman's global award for quality, and got him shifted to training.

I drag him back into the real world of MBAs. How does one fit Gandhi, purpose and values into the fiercely competitive world of CEOs obsessed with quarterly results and the stock price of their companies? "When Gandhi was trying to free India without firing a bullet, was it easy for him?" he asks. "When any leader tried to create a better future, did people make it easy for him? No!" Real leaders succeed in spite of the environment, not because of it. So, if you blame your environment for your lack of leadership, you are not a leader, he says.

For now, he says, "My purpose is very clear: If I can convert five bosses into leaders, I have achieved my life's purpose."