Are software testing firms worth joining

The jury is out on whether software testing firms are worth joining.

Manasi Mithel
India's software testing companies have made a global mark. Software industry lobby NASSCOM estimates the testing business outsourced to India, currently about $3.2 billion, will grow to $13 billion to $15 billion by 2020.

Software testing firms test the software developed by companies, either for themselves or their clients, helping them to fine-tune it, identify and overcome possible shortcomings. With software applications running key operations in every sector today, the vital role of these firms is obvious.

"Companies spend around 25 per cent of their budget on different types of testing," says Sriram Rajaram, President, Strategy and Corporate Development, Cigniti Technologies, a software testing services company. "It is the job of a software tester to make this spend worthwhile." 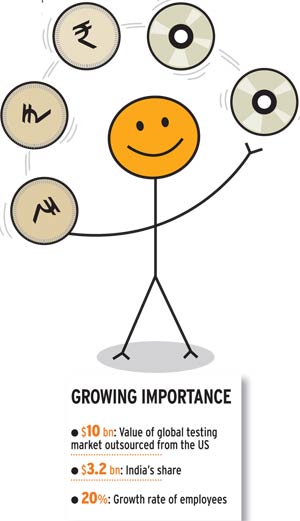 India has around 100,000 software testers. What prompts young people to join the segment and what are their career prospects? Initially, old timers recall, software testing had both low profile and low prestige. "There was a certain 'inferior' connotation attached to the job of a tester 10 to 12 years ago," says B.S. Murthy, CEO, Leadership Capital, an executive search firm.

Rahul Goel, Test Manager, Cigniti, explains why he prefers working with a tester rather than a software development company. Goel joined Cigniti in 2009 after having been with Microsoft India for four years. "Organisations are generally biased towards their own products," he says. "But people in an independent software testing company have the luxury of conducting quality assessments in an unbiased way."

And, salaries? Those who switch from software development to software testing, usually get a hike of around 15 to 20 per cent, say experts. "But it is not money alone that will draw people to testing," says Maveric's Reddy. "You need to offer cutting edge, challenging projects. Candidates will not move if it is just business as usual." Cloud computing, for instance, is an area where the demand for testers is high. Companies want their applications to be cloud computing compatible.

But the profession has its share of detractors, too. "It is a routine work ultimately," says Kris Lakshmikanth, CEO, Head Hunters India. "It is not a very attractive field." Indian companies still offer only application testing services, say insiders. Contracts to test complex products are still not usually given to them.

Murthy also feels there are limits to the segment growth. "It is projectbased work," he says. "So maintenance numbers at testing firms are low. A software testing company with, say, a 20 per cent annual increase in revenues thus only sees a seven to eight per cent increase in headcount every year."

Companies are also fashioning software that can automate the process of testing software, in a bid to do away with testers and thus cut costs. Both Murthy and Lakshmikanth call automation the greatest threat to the testing industry.