Assessment tools provide a useful filter even if their use requires companies to cast their nets much wider than before.

Manasi Mithel
Quantity does not always ensure quality. India's demographic dividend is all very well, but how many of the engineering and business school graduates who emerge every year are employable? A number of surveys and reports highlight the same, sorry truth: not many.

"Only 15 per cent of university graduates of general education and 25 to 30 per cent of graduates of technical education are fit for employment," says a recent report on employment based on deliberations at the Federation of Indian Chambers of Commerce and Industry. A survey by Aspiring Minds, an employability assessment company, restricted to the IT sector, says only 2.68 per cent of the 500,000 fresh engineers produced annually would find place in IT product companies, while the figure rises to 17.45 per cent in IT services. The Labour Report 2012 by HR firm TeamLease notes that ever since liberalisation began in 1991, private employers have been lowering their standards to ensure vacancies are filled. They have also been holding repeated training or 'repair' programmes to render fresh recruits capable of performing the tasks they were hired for. 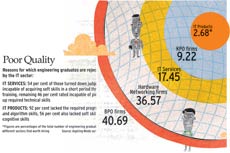 Click here to Enlarge
Corporate houses, especially those which hire in bulk, remain anxious to sift the grain from the chaff from among the plethora of jobseekers. "There is a lot of effort that goes into training our recruiters so that we get the right kind of talent for our company," says R. Ramkumar, Senior Vice President, Corporate Research and Communications, Cognizant. Around 250 to 300 Cognizant executives along with 50 to 60 people from its HR division fan out across 75 to 100 engineering colleges and B-schools. Last year, Cognizant added over 20,000 fresh engineering and B-school graduates to its workforce.

New and sophisticated assessment tools are also being devised. Aspiring Minds, for instance, in collaboration with the Gyan Ganga Institute of Technology and Management, has set up an employment exchange in Bhopal - the first of its kind - that examines those who enrol with it using an array of computerised assessment technologies, biometric kiosks and video monitoring, to pinpoint where exactly their skills lie. The firm intends to set up 30 such exchanges across the country to assess 300,000 people a year.

Another assessment company, MeritTrac Services, has designed online simulation tests which review a candidate's language skills, personality traits, and aptitude for different tasks, apart from domain knowledge. "It is important for companies to use hiring tools which test a candidate's skill performance in specific areas," says Murlidhar S., co-founder and CEO of MeritTrac. One such test, for instance, requires the candidate to simulate the organising of a college fest online in 40 minutes flat, taking care of all aspects of the task: the pricing of tickets, the inviting of celebrity guests, the handling of crowds and so forth. "If you price your entry tickets too high you won't draw crowds. But tickets can't be priced too low or you won't be able to budget for the very large crowds your fest will draw," says Rajeev Menon, General Manager, New Product Development, MeritTrac, who designed the test.

Assessment tools provide a useful filter even if their use requires companies to cast their nets much wider than before. "Earlier we were reaching out to around 100 colleges for our fresh recruits," says Nitin Bhat, Vice President and Global Hiring Leader at Genpact. "Today, we go to about 400 colleges."

It is also important for companies hiring in bulk to pay special attention to testing different skill sets. An IT company setting only a Java test, for instance - Java is a computer programming language - to gauge the programming skills of engineering graduates could miss out on some good programmers who know only C++, another computer programming language. "This typically happens in sectors like IT services where supply of people is high and companies have the luxury to reject a lot of people," says Himanshu Aggarwal, founder and CEO of Aspiring Minds.

Proper assessment tools enable companies to avoid such 'false rejects', as Aggarwal puts it. These tools are even more important for companies in sectors such as insurance and financial services, where the number of applicants is much lower than in IT, and which, therefore, do not have the luxury of rejecting too many.