Hiring likely to pick up in some sectors in 2013

The health-care sector is one of a handful where demand for trained professionals is rising even as hiring in several other industries such as financial services, IT and automobiles remains muted. The demand for clinical research professionals will also go up.

The overall demand for talent fell in 2012... We expect hiring to improve in 2013: Atul Vohra<em>Photo: Aditya Kapoor/www.indiatodayimages.com</em>
Manasi Mithel

The overall demand for talent fell in 2012... We expect hiring to improve in 2013: Atul VohraPhoto: Aditya Kapoor/www.indiatodayimages.com
Having completed his MBBS, Vaibhav Rastogi worked as a doctor for four years, but then decided to enroll for another course at the Indian Institute of Health Management Research (IIHMR), New Delhi. In November, close to completing it, he got a job with the All India Institute of Medical Sciences. He joined, however, not as a doctor, but as a Medical Research Officer, an administrative position.

What prompted the career change? "The demand for administrators in health-care is rising," he says. Indeed, IIHMR had a placement record of 90 per cent in 2012. The Sterling Group, Manipal Hospitals, the Bihar government, the United Arab Emirates-based GMC Hospitals and some software companies working on health-care solutions were among the recruiters, says Dr Rajesh Bhalla, Dean, IIHMR.

The health-care sector is one of a handful where demand for trained professionals is rising even as hiring in several other industries such as financial services, information technology (IT) and automobiles remains muted. "Recruitment in the healthcare sector is likely to remain strong in 2013 as hospital chains expand," says Kamal Karanth, Managing Director at executive search firm Kelly Services. The Max Healthcare chain, for instance, added four hospitals this year, taking its total number of hospitals to 12. "Our headcount this year rose almost 40 per cent," says Malvika Varma, Senior Vice President for Human Resources (HR), Max Healthcare. 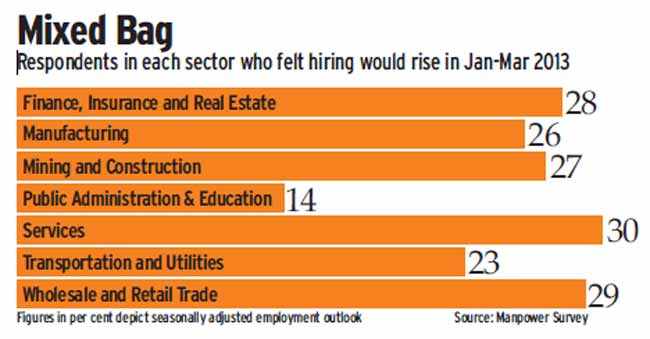 Smaller players are expanding too. EyeQ, a chain of eye-care centres in Tier-II and Tier-III cities, plans to open 50 more centres in 2013 to add to its existing 20. It recruited about 400 professionals in 2012, taking the total workforce to 600. "For middle to senior level non-medical staff we picked people from IIHMR, the Institute of Management Studies, Indore, and Jamia Millia Islamia University, Delhi," says Subhash Bansiwal, Chief Human Resources Officer, EyeQ.

Hiring is likely to be robust in the pharmaceuticals industry as well, says Kelly Services's Karanth. "The demand for clinical research professionals will go up as drug makers boost their research capabilities to take advantage of several drugs going off patent," he says. Drugs worth more than $50 billion will go off patent in next three years, according to Divakar Kaza, President-HR, Lupin.

Lupin hired 125 scientists in 2012, a 10 per cent increase over the previous year. "The pharmaceutical industry has remained insulated from the economic slowdown" says Kaza. "The company will continue to hire to maintain its growth trajectory."

But shift to other sectors and the scene changes dramatically. A November 2012 report by job portal Naukri.com showed recruitment in IT, business process outsourcing (BPO), banking, insurance, auto, construction, and telecom sectors all fell during the month compared with a year earlier. "About 80 per cent of India's IT sector revenue comes from the West, and since the United States and Europe did not do well in 2012 this sector went slow on recruitments," says E. Balaji, Managing Director at executive search firm Randstad India.

Top IT companies say the economic uncertainty makes it difficult for them to finalise hiring plans. "The demand visibility for hiring is reducing because there is a lack of predictability in decision-making by clients," says Prithvi Shergill, Global HR Head at HCL Technologies. A drop in attrition rates is also leading to a decline in fresh hiring. At HCL, which employs 85,000 people, the attrition rate fell from 15.9 per cent to 13.6 per cent in September 2012.

For senior-level hires, too, 2012 proved weak. A recent survey by the Association of Executive Search Consultants (AESC), a world-wide association of executive search firms, found that in Asia the number of job searches at senior executive firms fell five per cent in 2012.

"The overall demand for talent fell from what it was in 2011," says Atul Vohra, Managing Director, Transearch India, a recruitment firm for senior executives. "Sectors such as heavy engineering, infrastructure, mining and financial services were heavily impacted." Vohra says delays in decision-making, a fund crunch and higher raw material costs hurt the infrastructure sector. Arun Das Mahapatra, Chairman, Heidrick & Struggles, an executive search firm, says the banking and financial services sector is "cautiously optimistic" about 2013 but the trend in the first two quarters will likely be subdued.

Citibank, however, is recruiting at junior and middle levels. "There has been an overall upswing in hiring on the retail side in 2012," says Anuranjita Kumar, Head-HR at Citibank India, which has 7,800 employees. In early December, Citigroup said it will cut about 11,000 jobs globally, but as of now this will have no impact on India. Telecom companies will likely recruit for select functions only.

Ashok Ramchandran, Director-HR, Vodafone, says the company will strengthen its commercial and technical operations. It plans to add almost 1,400 employees to its 11,000-strong workforce this year. The Manpower Employment Outlook Survey for the first quarter of 2013 predicts a pickup in hiring activity compared with the Octoberto-December period of 2012. The survey showed that 23 per cent of the 4,496 respondents expect staff strength to go up. The services sector will lead the pace.

Vohra sums up the likely scenario in the year ahead. "We expect hiring to improve in 2013," he says. "The pickup will be significant compared with 2012 but gradual compared with the strong rebound seen after the 2008 crash."

*An earlier version of this story erroneously stated that Lupin hired 1,250 scientists in 2012.