A global study of business leaders across countries by human resources firms Right Management and Tucker International lists the imperatives of succeeding in a global set up, and shows Indians are poor at building trust.

Many Indians would consider turning up 10 minutes late for a meeting a minor matter. But the same infraction could cause great discomfort among people of some other cultures which are rigid about punctuality. It could even lead to them mistrusting Indians . This could well be one of the reasons why Indian business leaders have been rated the worst at building and maintaining trusting relationships, in a global study by human resources (HR) firms Right Management and Tucker International.

The study, Leading Across Cultures in the Human Age, elicits the views of more than 1,800 global business leaders belonging to 13 nationalities. It identifies six competencies that are vital in a global environment and evaluates how executives from each of these countries measure up. These are the ability to adapt socially, demonstrate creativity, maintain an even disposition, respect beliefs, instill trust, and navigate ambiguity.

The study says there is growing awareness among organisations of the need for their managers to have skill sets that would give them improved chances of success in a diverse global environment. Leaders from the United States top five of the six competencies, while British leaders fare the best at maintaining an even disposition. (See Keys to Success.) And while Indians are the worst at instilling trust, the study also says that Japanese leaders are the worst at social adaptability, demonstrating creativity, and maintaining an even disposition. 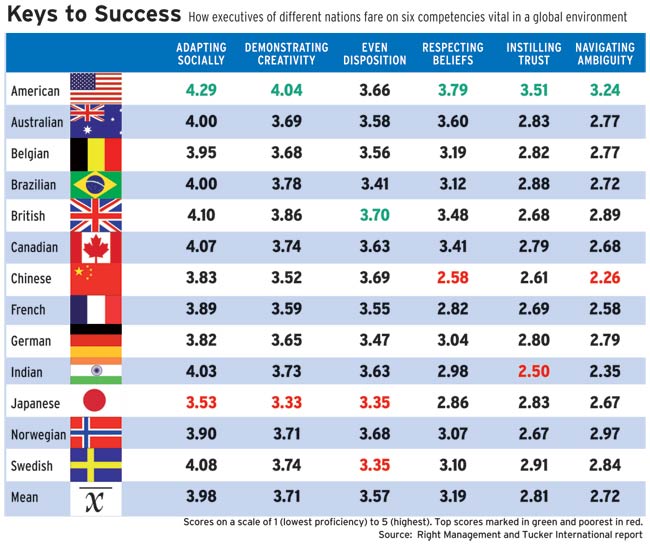 The study says trust is the glue that holds diverse teams together. "Leaders who bring high trust to multicultural organisations get superior results by clarifying expectations, listening first, creating transparency and practising accountability," it says. Indian HR executives agree. "Leaders can manage with the lack of any other competency, but if they fail to instill trust, or break trust, they stand to lose in a big way," says Mohan A.V.K., Global Head of Human Resources at EXL Service Holdings, a back-office services firm.

Chaitali Mukherjee, Country Manager for India at Right Management, says the tolerant attitude towards being late for meetings or speaking in one's local tongue during meetings is neither acceptable nor common in other regions. "It is common to find people (in India) who commit to something they do not want to deliver," she adds.

The study will also help companies size up managers and decide if they are ready for global roles. Managers heading a global team, for instance, need to have the capacity to quickly adapt, as well as to socialize easily, as a lot of business is firmed up over food and drinks. This is especially important in Asian cultures, where relationship building matters a lot. Again, the study says, considering that businesses operate in a high pressure environment, it is important for leaders to remain calm even when they make mistakes or fail to achieve their targets.

Given the rapidly changing nature of business, it is vital as well for global leaders to be able to deal with ambiguity, and to be creative in resolving problems, says the study. It cites an IBM survey that polled 1,500 CEOs, many of whom felt that while creative approaches were more difficult, they were more successful in ambiguous situations.

Most progressive organisations today are setting down a list of skills relevant to their businesses their leaders must possess. "At IBM we have defined a set of nine competencies our leaders must work to acquire," says Chandrasekhar Sripada, Vice President and HR Head at IBM India. These include the ability to collaborate globally, embrace challenge, build trust, and influence people.

Regional peculiarities, according to many managers, dominate when there is lack of global exposure. Payal Koul Mirakhur, Vice President for Business Development at Aricent Group, relates the instance of a senior account leader at her company, who has had enviable multicultural exposure.

The executive, a Persian by birth, grew up in a Scandinavian country, went to Australia for higher education, lived in various other parts of the world as part of his work, and is now settled in Paris. "When he calls or interacts with the team in India, many people start talking to him in Hindi. They have to be reminded he does not know the language," she says. "That is the level of comfort his persona generates. This is where exposure helps."

Mirakhur adds that, while hiring, she attaches great importance to the amount of exposure a person has had, since Aricent operates in 36 locations across the world. The need for a matrix to evaluate and hire leaders for global and diverse roles is undeniable. "We are working on articulating a global competency matrix for our managers who have to deal with very diverse environments," says Amitabh Hajela, Vice President and Global HR Head, Aricent.