Data science and analytics are as old as the 1940s. From just numbers, data analysts now deal with social media, pictures and videos. They are the next big thing on the global jobs radar and Indian companies are grooming many of them.

Dell Global Analytics division Director Pankaj Rai
Until March this year, the desktops and notebooks displayed on technology solutions company Dell's website were ranked without much consideration to what users were looking for. Kiran Rama, 31, a consultant at the company's Bangalore office, changed that. He crunched data on the performance of Dell's products, the revenue they earned, and their 'up-sell propensity' (for instance, if 100 visitors see a product, how many buy it?). The analysis helped Dell display products more effectively on its US, Japan and Brazil websites. For instance, among desktops and notebooks, products with a warranty were ranked higher. In the US, pages targeting small businesses and home buyers began to rank memory products higher.

The results were immediate.

"Between March and October this year, Dell has generated additional revenue of close to $4 million because of the new rankings," says Rama.

Mahadevan Balakrishnan, who works for analytics company LatentView in Chennai, recently helped a US-based retail client more than double its revenues. The client wanted to know the impact of its $45 million-a-quarter marketing campaign in the US. It was earning quarterly revenues of around $90 million through this conventional and digital media campaign.

"We told them their promotions would work better through radio in certain parts of the country, during certain seasons, and on TV in others," says Balakrishnan, who is an analyst. Today, with the same marketing budget, the company is earning $200 million in revenues in a quarter. 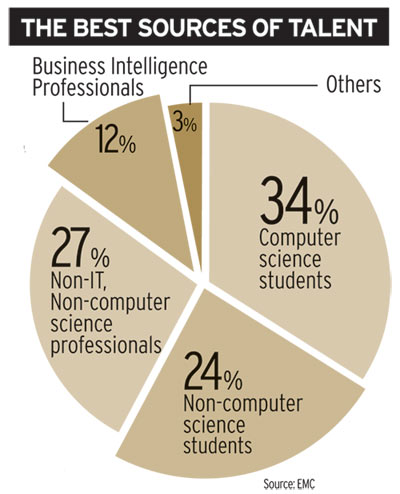 Rama and Balakrishnan have the "sexiest" jobs of the 21st century, going by a recent article in the Harvard Business Review. Their designations may not say so, but they are essentially data scientists. This is a new breed of analysts, who can mine huge volumes of data, make sense of it, and help companies make better business decisions.

Data science and analytics are as old as the 1940s. Robert Strange McNamara, a former president of Ford Motor Company, introduced the data and statistical tools that turned Ford into a great company. (He later became the US Secretary of Defense and escalated the Vietnam War).

In the last five years, the nature and volume of data has changed dramatically . From just numbers, analysts now deal with social media, pictures and videos. A 2010 study sponsored by cloud computing and big data solutions provider EMC, put the phenomenon in perspective. The study revealed that between 2010 and 2020, digital information in India will grow from 40,000 petabytes to 2.3 million petabytes, double the worldwide rate. In 2010 alone, 40,000 petabytes of digital information, equivalent to the storage capacity of 2.5 billion 16GB iPads, was generated. 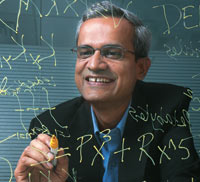 A data scientist combines knowledge of business, computer science and statistics, says Dell Global Analytics division Director Pankaj Rai
"It is a combination of business knowledge, computer science and statistics," says Pankaj Rai, Director of Dell's Global Analytics division. "Business knowledge is required to understand and solve a problem. Then comes understanding data: where it is stored, in what form and how to extract it. Third is how to manipulate the data and this requires statistical and computer programming skills," he explains.

It is difficult to find all three skills in one person. Indian companies are therefore grooming talent freshly hired from engineering and MBA institutes for data scientist roles. "Dell is developing talent internally. In our contact centre business, we are training people in data and statistical tools. We also hire people from the IT domain with programming skills and train them in the online business," says Rai. LatentView has a similar programme.

"We have a two to three month training programme for new entrants in basic stats tools. This is followed by a six to 18 month programme where they get to work on client projects with expert guidance," says Melissa Thermidor, Manager, Marketing, LatentView.

Companies such as EMC have tied up with colleges to offer certificate courses in analytics. "By January next year, a certificate course on data science will be offered by us through the tie-ups we have with over 200 colleges across India," says Rajesh Janey, President, EMC India & SAARC.

A customised data science degree is yet to become a standard programme in India's premier educational institutions. However, courses on business analytics and quantitative subjects are offered by Indian Institute of Mangement, Lucknow, Indian School of Business, Indian Institute of Science and the IITs.

The demand for analytics services is huge - most large and mid-tier IT services companies now have focused analytics business units . According to a 2011 NASSCOMCRISIL study, the analytics segment in India was worth $2 billion in 2010. That year, it employed around 70,108 people in over 100 firms. The market is expected to touch the $5.6 billion mark by 2015 and will need 200,000 employees. If there are enough skilled data scientists, India can easily become a supply hub, just as with IT services.

"In India, we focus on maths right from school. This predisposes us to be good in maths and statistics, and suitable for the role of data scientists," says Kamaljeet Anand, head of KIE Square Consulting, a technology consultancy.

So, what salaries does the world's sexiest job command? They are not significantly different at the entry level compared to engineering jobs, but salaries in analytics will rise faster than in any other domain. In Dell, for instance, data scientists with five or six years' experience are paid a 22 to 25 per cent premium, on average, over other departments.

All indications are that talent will gravitate more and more towards data science. And both employees and companies offering analytics services will mint money.