Not long ago, venture capital funds had to scout for professionals and woo them into joining the young companies they backed. But, today, experienced professionals are doing so on their own.

Arjun Raychaudhuri, CFO, IFMR Rural Channels <em>Photo: Aditya Kapoor/www.indiatodayimages.com</em>
Sarika Malhotra
Arjun Raychaudhuri spent nearly a decade working for big companies, including financial services provider JPMorgan and management consultancy Oliver Wyman. At his last job - as Senior Associate at J.C. Flowers & Co, a private equity fund specialising in buyouts - Raychaudhuri was based in London, and handled transactions around the world. From there, investing in rural India is a huge leap, but that is what the 32-year-old does today.

The shift was anything but sudden. It started with a chat with IFMR Trust Chairperson Bindu Ananth on a visit to India in mid-2012. The trust, a private body, invests in companies that can improve access to financial services, especially in remote rural areas. It set up a venture called IFMR Rural Channels, which is developing a model to achieve that goal. "I spent about eight months getting to know them and helping with strategic planning," says Raychaudhuri. Early this year, sure he would enjoy the job and could contribute meaningfully, Raychaudhuri quit J.C. Flowers and joined IFMR Rural Channels as Chief Financial Officer.

Raychaudhuri says he believes his new job will let him test his limits and develop skills to complement his strengths. "I enjoy jumping into the thick of things and learning as I go along," he says. "This is an exciting and ambitious journey, and could transform how financial services are provided in rural India." The fact that IFMR Rural Channels is backed by venture capital fund Lok Capital made his decision to join such a young company easier. "Having been an investor, I believe that good VC/PE participation can help companies perform better." 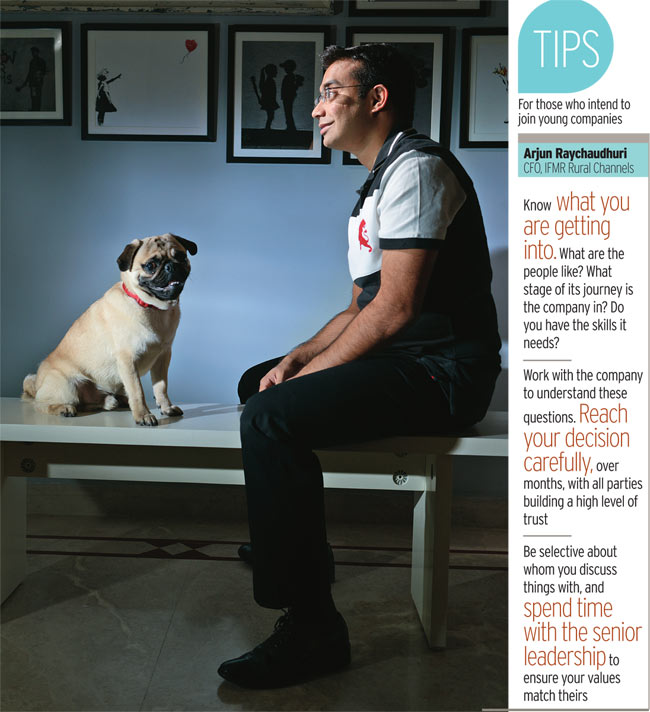 Raychaudhuri is a part of a growing brigade of seasoned mid-level professionals who are choosing to work for young companies backed by private equity or venture capital funds. With work experience ranging from eight to 20 years, they are in search of something new and challenging.

Take the instance of 30-year-old Shikhar Mohan, whose last job leading global brand strategy at HCL Infosystems for 2.5 years. Early this year, he joined CommonFloor.com, a real estate portal as Vice President, Marketing. Why the switch? He says he was enthused by the opportunity to be part of a process of building something from scratch.  After years of working for a global IT and consumer electronics brand such as HCL, he wanted to work on an innovative product using cutting-edge marketing tools.

So what was different in a young company? "I don't think it is 'what' a young company allows you to do but 'how' it allows you to do things that sets it apart from its more established counterparts," he says. "A collaborative and friendly work environment is almost a part of a young's company's DNA. As a consequence, there is less time spent on consensus building and more time on innovating your way to growth."  Within two weeks of joining CommonFloor.com, for instance, he, along with his team, planned and launched an innovative campaign called 'Property ki Home Delivery' - providing the prospective home buyer details of houses available at his doorstep entirely for free, instead of the buyer having to go out in search of real estate brokers. "This service has never been available," he adds. "We felt that was unfair and that became the rationale for the campaign." The two month advertising campaign across Bangalore encompassed radio spots, hoardings, the social media, posters and pamphlets. Mini-events were organized in over 100 apartment blocks across the city.

Not long ago, VC funds had to scout for professionals and woo them into joining the young companies they backed, but today, experienced professionals are doing so on their own. "Many professionals feel that in a big-company environment, they get boxed in, as they have to work in an already well defined framework," says Sanjeev Aggarwal, Co-founder and Senior Managing Director, Helion Venture Partners. "But in a start-up, they can define the framework and execute to it. They feel empowered."

Professionals who quit big-company jobs to join new ventures draw assurance from the fact that reputed VC and PE funds have done their homework on these companies and found them worth investing in. It also means that the companies, though small, are not starved of funds. It certainly made a difference for Mohan - he knew CommonFloor was backed by venture capitalists Accel Partners and Tiger Global. "Facebook, Groupon, MakemyTrip and Flipkart are some of the other companies that they have funded," he says.

Opportunities in young companies do not generally come via headhunters. Often, they come to people who have worked with the funds or the companies - or the professionals in them - previously, and already have a relationship with them. 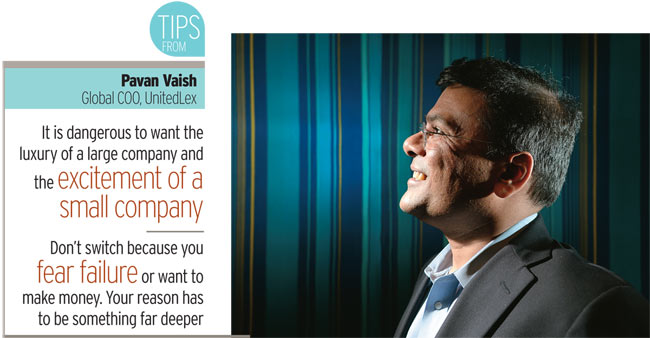 Photo: Aditya Kapoor
For instance, 40-year-old R. Senthil Kumar was looking for a challenge, after 13 years of working at HDFC Bank Ltd. He handled an Rs 8,000-crore portfolio, and had a 150-member team reporting to him. He says he was comfortable, and had employee stock options, but "work was getting monotonous". After working occasionally on the account of Vasan Eye Care, an eye hospital chain, he got to know the company well enough to consider a job there a real possibility. "Rather than becoming an entrepreneur and risking it all, it made sense to join a young company where I could be more like an entrepreneur and transform it," he says. "Leading a young company is an alternative to growing something of your own."

He adds that the fact that Vasan Eye Care had the backing of VC firm Sequoia Capital gave him more comfort than working for a family-run business. He joined Vasan as Chief Operating Officer in late 2011.

His advice to anyone considering a shift: "You are bringing in a new agenda. Your skill sets must match the transformation. Most people go wrong here - they tend to take control from day one. One should gradually introduce changes and then take control."

Helion's Aggarwal says more and more people are reaching out to funds like his, expressing interest in the companies in its portfolio. "Every day I meet one or two people who tell me to introduce them to our portfolio companies," he says. "That change is very palpable."

For many, the switch is not only from a big company to a small one, but also from one sector to another, as it was for 43-year-old Bhaskar Bagchi, who had 20-odd years of work experience with companies such as Citibank, Standard Chartered, Tata AIG, IBM, and HCL Technologies. When he decided to quit his job as senior vice president for banking and financial services at HCL and join IndiaHomes.com, a real estate portal, he knew hardly anything about the real estate industry. He was introduced to IndiaHomes by Helion's Aggarwal, who has invested in the portal. Bagchi took the plunge and joined the company in mid-2011.

He says smaller organisations and start-ups offer more learning opportunities and unstructured work environments, and there is a strong sense of ownership. They are also more nimble than large companies, and this frees up managers to adjust strategy rapidly based on feedback.

Of course, some were making the switch from whale to minnow before it became a trend. Pavan Vaish was CEO of IBM Daksh, the business process outsourcing pioneer. "What I really wanted was a set-up where I walk in through the door and get goose pimples, where I am able to fundamentally alter people's lives in a meaningful fashion," he says. "At IBM, things had reached a stage and scale where it was becoming increasingly difficult to do that. I wanted to get the zing back." So he quit IBM and joined Canaan Partners-backed UnitedLex, a legal process outsourcing company, in early 2012. It was not an easy decision. "I had to come to terms to the fact that I was willing to fail," he says. IBM was a familiar environment for him, and he knew he had everyone's respect.

"As long as I was scared of failure, I would not leave IBM," he adds. "Within oneself, one has to get comfortable with the idea of trying something new, with the possibility of failing and yet taking it in one's stride. That's when you will take the jump. It is never about money, it is about your passion getting ignited."

But the soaring talk must be backed by action, Vaish says. "Many people romantically talk about start-ups and joining young companies, but few will take the plunge, only because of the fear of failure," he says.

Helion's Aggarwal concurs. "Many people reach out to funds to be a part of portfolio companies, but when the time comes to take the decision, they cringe. Not that the conversion rate is 100 per cent now, but many more are joining than before," he says.