Slowdown may hit increments and variable part of salaries

The slowdown may also hit increments and the variable part of salaries.

Shamni Pande
Having dealt with a downturn only three years ago and also noted the impact of the ongoing slowdown on developed economies, Indian corporate houses seem to be reasonably prepared for the fallout of this year's slowdown. Many had, in fact, begun tightening their belts , even before the announcement that gross domestic product (GDP) growth fell to a nineyear low of 5.3 per cent for the quarter ending March. Their approach is reflected in the postponing of increments and the slashing of employees' short-term incentives (STIs): bonuses and the variable component of salaries.

"We definitely notice a trend of both salary increments being deferred and bonuses and short-term incentives being withheld," says Kamal Karanth, Managing Director of Kelly Services, which provides workforce solutions. But he adds: "We do not see any panic in the market. People seem prepared to weather the storm." 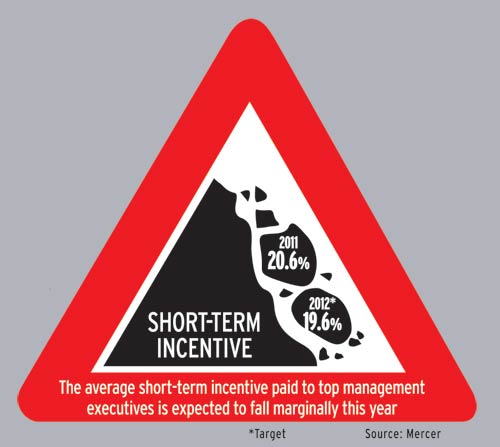 IT giant Infosys, for instance, has already decided to defer salary hikes this year. And variable payouts, which depend on three factors - the organisation's performance, the individual's performance and the business environment - have been affected in a number of companies.

Data released by leading HR consulting firm Mercer on the payment of STIs - drawn from 21,000 companies in 62 countries - shows signs of nascent business confidence in Western and Eastern Europe, Australia, New Zealand and West Asia. These are regions which were badly hit earlier. The data, however, also indicates a weakening in confidence for companies in the Asia Pacific region (including India), Latin America and North America.

ALSO READ: Work the slowdown in your career's favour

A key criterion for handing out bonuses is successful company performance. "If a company is predicting that it will pay out less this year - as our data shows for certain regions - it indicates that it expects its financial performance to be worse in 2012 than in 2011," says Hans Kothuis, Mercer's Asia Pacific Rewards Leader.

Arvind Agrawal, President, Corporate Development and Group HR for RPG Enterprises, agrees. "We want to pay fully, but if the business does not grow there might be an impact on the variable pay," he says. Many companies structure STIs in such a way that senior executives have greater exposure to the company's performance: the variable component of their salaries is much higher than that of others. "In our case the variable payout for junior employees is only 20 per cent, while for the senior ones it is up to 70 per cent," adds Agrawal.

Yet employment is still growing. A recent monthly employment index prepared by online job portal Monster shows a three per cent yearon-year increase for May. But the overall sentiment is anything but upbeat. "There is a sense of moderation in the online job market," says Sanjay Modi, Managing Director, Monster.com. "But businesses tend to reflect the economic environment only after a lag. If no speedy measures are announced by the government, the chances of the employment market reflecting the negative impact are very high."

Some companies remain exceptions. BPO firm Genpact, for instance, has paid out the full portion of variable pay to its employees. "It did not make sense to cut back on the variable payouts," says Piyush Mehta, its HR head. IT firm Cognizant has even announced salary increases of around eight per cent for its offshore associates, but excluding promotions.

Notably, the company's revenues grew by one-third last year and expects them to rise by at least 20 per cent this year. Still, in comparison, increments were 12 and 14 per cent last year, and this included promotions. Some companies are bucking the trend altogether. "Our sales staff has a robust sales incentive programme in place which is slightly higher than last year's," says Sanjay Bali, Vice President, Corporate HR, Samsung India. Average salary increments at Samsung were 19 per cent.

Similarly, employees at the Aricent Group have reason to smile. "We paid out more than 100 per cent for individual performance," says Amitabh Hajela, Global HR Head.