The demand for temps, or temporary workers, had been rising for some time, but lately there has been a spike. Reducing or freezing the hiring of permanent employees and making do with temps helps companies cut their fixed costs in a slowing economy.

K.R. Balasubramanyam / Manasi Mithel
Ajit Isaac, CEO of Bangalore-based human resource services firm, Ikya Human Capital Solutions, has just finalised plans to open an office in Tinsukia. It will provide temporary workers - or temps as they are called in the industry - to companies running power, telecom and other infrastructure projects in the region. Where is Tinsukia? It is a small business hub in Upper Assam, around 130 km from the Indo-Myanmar border.

That even Tinsukia needs temps is a measure of their growing ubiquity in recent years. In the five years since it began, Ikya has opened 24 offices, but is hurriedly adding another eight by March 2013. "We are entering Tier III towns and expanding further in the metros," says Isaac.

The demand for temps had been rising for some time, but lately there has been a spike. "In the first four months of this financial year, we hired as many people as we did in the first six months of last year," says Guruprasad Srinivasan, head of staffing at Ikya. Companies which employ temps in large numbers confirm the trend.

"We plan to increase our hiring from our third party vendors by 30 per cent this year," says Sarthak Raychaudhuri, head of human resources at Madura Fashion & Lifestyle. The apparel chain is adding to its stores; much of the staff at these will be temps.

Some believe the uncertainty in the economy has contributed to the growing reliance on temps.

"When the economy takes a dip, temporary hiring goes up," says Rituparna Chakraborty, Co-founder and Senior Vice President at the HR firm, TeamLease. Reducing or freezing the hiring of permanent employees and making do with temps helps companies cut their fixed costs.

"This is especially true of service sector companies whose expenditure on manpower, as a proportion of total revenue, is often three times as high as that of manufacturing companies," says N.S. Rajan, a partner at consulting firm Ernst & Young. Service sector firms - information technology (IT), retail and hospitality, among others - are indeed the biggest employers of temps.

Keeping down administrative costs, remaining flexible and above all, retaining the capacity to respond quickly to volatile demand are the three major reasons why companies hire temps, according to a survey this year by the industry association, the Indian Staffing Federation (ISF). We plan to increase hiring from our third party vendors by 30 per cent this year, says Sarthak Raychaudhuri, Head, HR, Madura Fashion & Lifestyle.
But there are other reasons too. Some hold the high attrition rate at companies responsible - firms are reluctant to invest in hiring and training permanent employees, fearing they will soon after be snapped up by rivals. They would much rather get previously trained temporary staff.

Though contract labour in factories has always existed, the proliferation of white collar temporary workers in India is relatively new, starting about 15 years ago. Currently India has around 1.3 million temps, which puts it - if absolute numbers are considered - among the top five countries using such workers, according to a study by research firm Indicus Analytics.

The same study notes, however, that as a percentage of the total workforce, temps are a mere 0.32 per cent. Isaac points to the IT industry as an example. "Globally about 20 per cent of the IT industry is temporary staff," he says. "We have a long way to go in India before we get there." (The corresponding figure for the Indian IT industry is around 10 per cent.) Globally about 20 per cent of the IT industry is temporary staff. We have a long way to go before we get there, says Ajit Isaac, CEO, Ikya Human Capital Solutions (PHOTO: DEEPAK G. PAWAR)
However, the trend is certain to grow. "This is due to the increased recognition of the value of temping by companies," says Rajan.

A recent Ernst & Young report estimates India's temporary staffing industry currently at around Rs 17,200 crore, with Rs 11,900 crore generated by the professional staffing segment. It predicts that, in the near future, around two to three per cent of the workforce will be temporary. And increasingly, instead of recruiting directly, companies are using the services of staffing firms like TeamLease, Ikya and Manpower, all of which have sprung up in the last decade.

How do the temps themselves feel about their jobs?

Kamarasan Elangovan, 26, has been a temp ever since he got his engineering degree from a Tamil Nadu institute in 2008. He initially joined an IT company in Noida, before shifting in April this year to the Hyderabad-based Magna Infotech, another staffing firm. He is currently posted at the Bangalore office of management consultancy firm, Accenture. "This job will help me build my profile. I got a good raise with it too," he says.

Divya Chugh, a Delhi-based administrative assistant at France Telecom's Orange Business Services, is a temp too, but by choice. After five years in permanent jobs - three with a television company and two with a media house - she took up temporary employment for personal reasons. She enjoys the status of being treated as an Orange employee, even though her job is temporary, but there are concerns too. "I'm not certain about job security," she says.

The social embarrassment associated with temporary employment, however, is clearly fading. "About 10 years ago people would rather sit at home than take up a flexi role," says Chakraborty. "The perception was that temp jobs did not require great calibre. If you were doing one, it meant you were dumb." 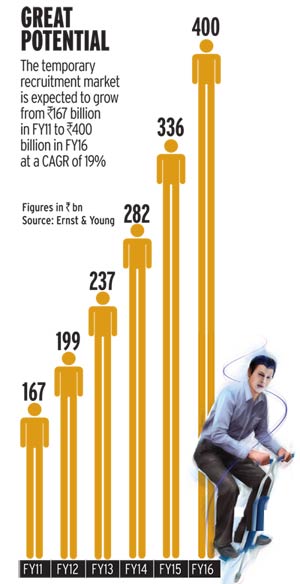 If an attitudinal shift has taken place, it is because the alternative to temping is often even worse - unemployment.

"It is these temping jobs that are keeping unemployment in check, and making thousands of youth socially respectable," says an industry veteran, who prefers not to be quoted. "Temps also get opportunities to work in different companies on different projects, which gives them exposure and confidence."

However, some worries remain.

An average stint with a particular company usually lasts no more than 15 to 18 months, though, given the growing demand for temps, durations spent 'between jobs' are usually short. Salary and perquisites are also a concern. With the staffing company getting a 15 to 20 per cent commission on the salaries of the temps they provide, what the temps earn is obviously less than the salary of a permanent worker at the same level.

As for perquisites, some companies, especially those in the fast moving consumer goods, retail and IT, make no distinctions.

"We provide similar benefits to third party employees as we do to our employees," says Raychaudhuri of Madura Fashion. "We do not discriminate when it comes to rewarding performance, for instance." But others follow different policies. "The benefits we get are not the same as those enjoyed by permanent workers," says Chugh.

Not surprisingly in a country without a social security net, it is permanent employment that most temps hanker after. The exceptions are usually retired professionals who can be inducted at senior levels but are not seeking job security - many multinational companies looking to establish a presence in India use their services.

The ISF survey cited earlier shows that around 54 per cent of temps see their present occupation as the first step to a permanent job. Similarly 33 per cent of company representatives queried said they too looked at temps as potential permanent hires.

With such convergence of objectives, temping could well become a winwin situation for both.