CORPORATE
The corporate world heaved a collective sigh with the shifting of Jairam Ramesh from the Ministry of Environment and Forests to Rural Development in Prime Minister Manmohan Singh's Cabinet reshuffle on July 12. Ramesh's activist role had upset many, including some agribiotech firms. Congress spokesperson Jayanthi Natarajan, a low-key politician, took over from Ramesh. Otherwise, it was status quo at the top deck of the Cabinet.

Land acquisition continues to occupy headlines. In the latest round, the Karnataka government has offered to shift Korean major POSCO's mega steel project away from plant at Halligudi in Gadag district. Stiff resistance from local farmers forced the government's hand. The new location for the plant has not been identified.

In the tech world, the country's top two software exporters seem to read the global conditions differently. Infosys, the second largest, said on July 12 that it had met its revenue guidance for the April to June quarter and stuck to its full-year revenue growth forecast of 18 to 20 per cent. It talked of a volatile global economy which could slow client spending. Two days later, TCS, the largest, announced a better-than-expected rise in quarterly profit and said the uncertain global economy was unlikely to hurt demand. The most downbeat bit that came from the company was that it remained watchful.

The index for industrial production grew by 5.6 per cent in May, a seven-month low, against 8.5 per cent during the same period a year ago. To blame: a dismal performance by the mining and manufacturing sectors. April's industrial output figure was also revised downwards to 5.7 per cent from 6.3 per cent as against 13.1 per cent year-on-year. 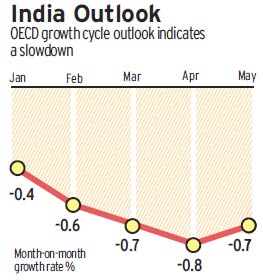 The new mining Bill is expected to reach the Cabinet soon. The draft Mines and Minerals (Development and Regulation) Bill, 2011, requires coal mining companies to share 26 per cent of their profit with people affected by a mine project. Such people will also get the entire royalty that miners of other minerals pay the state in which the project is located. The Bill will be tabled in the monsoon session of Parliament.

Inflation rose to 9.44 per cent in June, mainly because of rising prices of fuel and manufactured products. This may prompt the Reserve Bank to raise key rates again in its quarterly policy review later in July. Inflation, as measured by the Wholesale Price Index, was 9.06 per cent in May. It was 10.25 per cent in June 2010.

1.6% Year-on-year growth of India's car sales in June. This compares with 7.3 per cent growth in the first quarter sales of the current financial year, according to the Society of Indian Automobile Manufacturers. The coming festive season demand is keeping hopes high for now.

$5.8 bn Private equity investments in the first six months of 2011, according to global consultancy Ernst & Young. A large number of deals are in infrastructure. 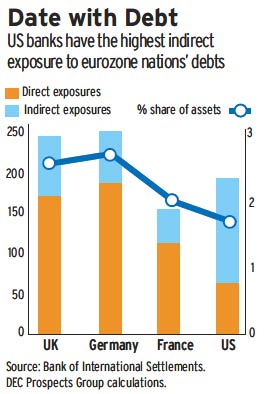 The eurozone crisis is keeping markets on the edge, with the euro and stocks falling worldwide. After Greece, it is now the turn of Italy and Spain, the eurozone's third and fourth biggest economies, to reach default zone. Leaders argued over a proposed summit as the threat to the 12-year-old single currency and a row over private creditors for Greece rescue plan escalated.